From Baby Beef to Beyond 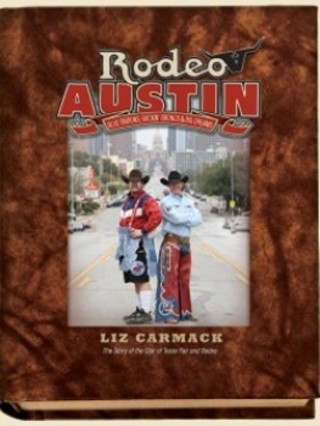 This year marked 75 years for Rodeo Austin – that shined-up chutes and scuffed-up boots other festival that happens every year during the same month as South by Southwest. To commemorate their place in the pantheon of Texas state/county fair culture, the group has released a book. Here's what it is, what it isn't, and what it could have been.

From it's preliminary days as Austin's first adorably named Baby Beef Show, held across the street from the Texas State Capitol in 1940, to packed out shows with traveling celebs like 2012 season headliners Bret Michaels and Glen Campbell at the Travis County Expo Center, Rodeo Austin (née Star of Texas) has been formalizing and celebrating Central Texas ag culture with a party that ranks right up with manure-kickers held in metropolises with beefier yeehaw-caché like Dallas or Houston. Despite wrong-headed perceptions that Austin is "not a rodeo town," ours is a big freakin' deal held every spring, attracting hundreds of thousands of attendees.

And it's that perception that makes this book seem like a missed opportunity.

Rodeo Austin: Blue Ribbons, Buckin' Broncs, & Big Dreams, in title, presents a compelling laundry list of the romanticism and excitement of an event that, at its core, is dirty and dangerous. Even the "women and children" events like calf-scrambles and barrel racing involve risk. There is nothing safe about the rodeo.

There is everything safe about this book.

Liz Carmack, local author (Historic Hotels of Texas, 2007, also with Texas A&M University Press) and head of her own PR/communications firm, took a year to research Rodeo Austin, according to the book, and there's no question, she tackled that task admirably. Culled from time spent digging through local archive trenches like the Texas State Library and Austin History Center and interviews conducted with a few dozen players in the rodeo scene, as well as livestock competitors through the years, details are organized chronologically. The book starts at the beginning and ends at the most-recent documented present-day (the 2011 rodeo season).

But its surplus of information suffers from a dearth of analysis… or color… or consistency. While fun peeks-into-the-past details like ticket prices are peppered throughout, they may have had more impact presented together as an info graphic. Straight out of press-packet details like approximately how may eggs were served at the first Cowboy Breakfast in 1997 (5,400). what corporation sponsored it (Motorola), and which mall's parking lot was the site (Highland) rate that kind of specificity, but things like ticket sales ("are at an all time high") are left dangling without any sort of immediate point of reference. And while a main thesis in the white paper on why Austin needs and deserves a rodeo may well be to establish for the capital city its rightful place as the center… or at least a center of Western and Texas culture, this bit of sociological influence and implication is often mentioned but never fleshed out or demonstrated.

Last year, in 2011, according to the book, Rodeo Austin attendance was 300,000. Considering the glut of entertainment options of springtime in CenTex, that is a whopping number. Admittedly, from our myopic Chronicle perspective, our "Western" view during rodeo time is more trained west of I-35, on the Austin Convention Center and SXSW. But a load of Austinites and folks from surrounding communities as well as rodeo-circuit regulars call the Travis County Expo Center home for the month of March. This book could have better bridged those communities and perspectives. Without an acknowledgment of what exactly distinguishes Austin from other rodeo cities, the book reads somewhat insiderly.

The book does posit a pretty dense history, a bit awkward for deep research, but clear enough in its chronology to be a more-than-competent document. That said, it is also a gigantic press release. The book definitely suffers from PR syndrome. The quotes are squeaky clean and often vapid (I'd give a specfic example, but there are too many, and it would seem unfair to single out one of the interviewees). In a five-paragraph interview with local NPR-affiliate KUT, author Carmack expresses more heart and verve than in the entire 116 pages of the book. This leads me to believe that the book fell victim to its own mission. At some point, decisions (perhaps some "design by committee"?) were made regarding focus and tone. And while Rodeo Austin can sometimes border on the engaging – like a sweet yearbook for folks deeply committed to the event's cause of supporting youth involvement in livestock and agriculture (to the tune of $1.5 million in scholarships, annually) – at its worst, the book too frequently snoozes into PR speak and feels like an annual report.

I know that it's easy to put on my goober glasses and get all 20/20 hind site and say things like: Why not delve more into the specific lives touched by this cultural juggernaut? Why not focus on a few competitors in the saddle and straddling the pens? Why not a coffee table book of some of the amazing photography through the years with captivating captions by Carmack reveling in the dusty glee that the rodeo brings? But, really… Why not?

There is much to like/love/glean in this volume because no one has ever focused on Star of Texas before (and rodeo nerds like me appreciate the dip into the chaw tin of this sort of minutia), but the book fails to contextualize the modern rodeo in the atypical Texiness of Austin. It fails to harness the excitement even a cynical, jaded Chron editor like me experiences every year when I can see the lights from the carnival twinkle on the horizon just east of my neighborhood, when I decide what touring show I am going to take in (even after that overly engorged marathon of live music called SXSW), and whenever my boots hit the Expo Center and my heart races at the familiar compressed tone of the announcer over the PA. I'm happy I have this book to refer to when I want to follow the timeline of an important Austin institution. I like this book. I wanted to love it.

Rodeo fans: This Saturday, Apr. 21, 8pm is the last airing of the Rodeo Austin Finals Round, on the Pursuit Channel (DISH channel 240; Direct TV channel 608). Also, on Monday, May 14 is Rodeo Austin's Cowboy Classic Golf Tournament, a full day beginning with 10:30am registration, mid-day play, and complimentary lunch and dinner. See rodeoaustin.com for details.