Fighting for truth, justice, and fewer books beside the bed 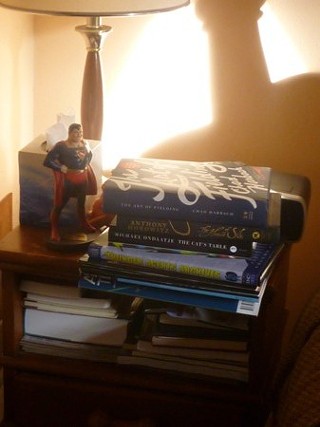 Leap this in a single bound, Supes! (by Robert Faires)

A grinning Superman statue stands watch on my bedside table, and I figure that grin across his invulnerable mug comes from seeing me locked in my own never-ending battle: to reduce the stack of reading matter that's perpetually replenishing itself in the manner of a Hydra. I finish one book, and two more pop up to take its place.

Once upon a time, this was not the case. When I was a lad, the closest thing I had to a superpower was a reading ability far beyond those of mortal kids. I could work through a stack of library books in less time than it took the Man of Steel to trick that jerkwad imp Mr. Mxyzptlk into saying his name backward and returning to the 5th dimension. Granted, in those days the books I was reading tended to be thinner, and since I had yet to take on the duties of a mild-mannered arts editor at a great metropolitan newspaper, I had considerably more time to read. I could probably carve out more time in my schedule for reading nowadays than I do, but as it is, it's mostly those precious few minutes after I've dived between the sheets that I dive into the pages of a novel or magazine. And since my nightly progress can usually be measured in the single digits, a book can take me a couple of months to work through. If I can log a half-dozen between January and December, I consider it a good reading year. And since I tend to acquire books faster than that, it doesn't take long for my bedside pile to grow to a size that even Supes might not be able to leap over in a single bound.

The current stack is all new and mostly came in the form of gifts, so I can't tell you much about them, except why they came my way. The top of the stack – and the one book I've actually begun – is The Art of Fielding, the debut novel by Chad Harbach, a founder and editor of the literary magazine n+1. It was a Christmas gift from my daughter Rosalind, who blessedly inherited my now-MIA superpower and was perhaps hoping a good read might help restore mine. She also knows of my fondness for baseball, not a sport at which I have ever distinguished myself – the 1966 Red Tops won our Little League division without any help from me in right field or at the plate – but a sport that struck some chord in me during my college years, through following the trials and rare triumphs of my long-suffering Astros and through writers who captured the soul of the game in words (Roger Angell, W.P. Kinsella, Michael Bishop, whose Brittle Innings is that rarest of gems: a sci-fi baseball novel, with Frankenstein's monster playing minor-league ball in the South during WWII). Harbach's book takes a gifted young shortstop whose life grows incredibly complicated after he's recruited for the team at a small but sophisticated college in Wisconsin. With luck, I'll bring this one across home plate by opening day of the season.

Below that is The House of Silk, another Christmas gift – this one from my niece Cate Tucker – and another book hooked to a pet penchant of mine, in this case, the literary sleuth's sleuth, Sherlock Holmes. Sir Arthur Conan Doyle's peerless master of detection was one of the first fictional detectives I ever encountered in print (though I think he may have been edged out of the top spot by his predecessor, C. Auguste Dupin, from Poe's "The Purloined Letter" and "The Murders in the Rue Morgue"), and I always enjoyed not only the original stories but also the many pastiches and parodies. However, I didn't really make the shift from casual acquaintance to enthusiast until I portrayed Holmes himself in three separate theatrical productions mounted locally in the late Nineties. For research, I re-read the canon and some extensions of it by contemporary writers (Michael Chabon and Caleb Carr, among them) and have kept at it, so it's elementary that someone would deduce that I'd be interested in Anthony Horowitz's new novel, which is the first new Holmes story authorized by the Conan Doyle estate. I have studiously avoided any accounts of the plot in reviews so as to be more readily surprised once "the game's afoot." All I know is that Watson thought the case too shocking for his era and ordered it sealed from human eyes for 100 years. It's entirely possible that I'll move the book to my personal reading nook, where my shelf of Sherlockian lit lives (along with my deerstalker and faux Meerschaum pipe) and where I may lose myself in this Holmes adventure while sitting in a leather chair and sipping a martini (my substitute for a seven percent solution).

Below that is Michael Ondaatje's The Cat's Table, the only reading material currently by the bed that wasn't a gift. I snagged the novel off the shelf of Books Editor Kimberley Jones after reading a review by The Washington Post's Ron Charles in the local daily. I'm not the world's greatest traveler myself, but I've long been captivated by literary travelers, starting with Phileas Fogg, Huckleberry Finn, and Frodo Baggins. The review's description of an 11-year-old boy's voyage on an ocean liner from Sri Lanka to England captured so much of what I love in a book: quirky and mysterious characters, an exotic or romantic setting (an ocean liner in the Fifties heading from Asia to England kayos both birds with one stone), an outward journey that's reflected by an inward one in the protagonist, and, for me the most irresistible lure of all, adventure – going places I never shall and doing things I never would. I look forward to boarding this ship and have a suspicion that at the voyage's end I won't want to disembark.

On the fourth spot down, the only nod to my lifelong addiction to comics – and more specifically, to superhero comics: the fourth volume in the THUNDER Agents Archives, as reprinted by DC in its deluxe Archives format. Rosalind also gave me this, which fills a gap in my collection of this cult series from the Sixties, a rare attempt to fuse the spy craze of the decade (yet another fixation of mine) with the superheroes who dominated the spinner rack. The heroes were superspies in the most literal sense, utilizing their extraordinary powers in service of global espionage agency THUNDER, the Higher United Nations Defense Enforcement Reserves. The stories are as goofy as they are exciting, but there was a real attempt by the writers to try something different, and the sense of experimentation adds an extra kick, and it's buoyed by oodles of ogle-worthy art, supplied by several of the most dynamic artists working at the time (Wally Wood, Gil Kane, Steve Ditko, Reed Crandall, Dan Adkins). It's a bit of a cheat to set this by the bed, as I now do virtually all of my comics reading in the aforementioned reading nook. But for many years before that manspace was created, my bedside table always held a stack of the latest comics, which I'd read before sleep as a means of easing my brain away from stitching together words about local stage productions and classical concerts. Nothing like a caped crusader to carry you out of your workaday world; they've "saved" my life on more occasions than I can count.

Providing the foundation for the stack are some magazines: first a few issues of The New Yorker from November and December, the last remnants of a subscription that I was given (!) as a Christmas present in 2010, and the current issue of American Theatre magazine – but not the issue where I was tagged as one of a dozen of the most influential theatre critics in America. I'd never get out of my own head by reading that before going to sleep. I spend too much of my dreamtime writing as it is. Let me hit the horsehide, cross the ocean, solve a crime, fight that other never-ending battle: the one for truth, justice, and the American Way. That's the way to dreamland.