What To Do After SXSW

David Foster Wallace. HRC Symposium. What else do you need to know? 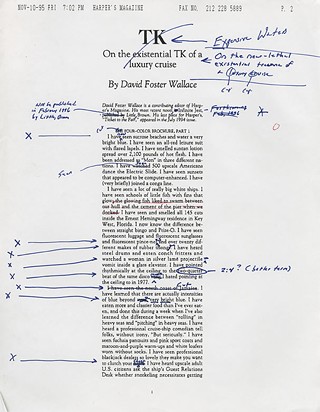 Opening page of corrected proof of Wallace's 1996 essay "Shipping Out: On the (Nearly Lethal) Comforts of a Luxury Cruise" for Harper's magazine (image courtesy of the Harry Ransom Center)

So, after all that, what do we think of David Foster Wallace now? Wait, did I just imitate, albeit feebly, the way he wrote? And did I just do it again, with that second question?

Oh, DFW. As if we weren't self-conscious enough before the genius of the man, the emperor of self-consciousness, charmed or intrigued or simply pulled us off by our hair into its inevitability. Of course, there wasn't really a "before" for quite a few, oh, what would they be now, late-thirtysomethings?: Wallace has been credited with/accused of both creating and ruining at least one generation of writers – not to mention, ahem, inventing the language of the Internet or some such (I think not on the last one, oh somehow-transformed-into-something-rather-superficial-with-this-latest-redesign New York Times Magazine).

The posthumous conversation has turned only a tad less reverential: Did Wallace embellish the cruise essay in A Supposedly Fun Thing I’ll Never Do Again with fictional details? Has he turned up as a character in the work of cohorts and contemporaries ? (Jonathan Franzen, Mary Karr, Jeffrey Eugenides, asked and answered.) Did he have a secret life in which he traveled the unclever byways of self-help books – possibly seeking, god forbid, some understanding of the lifelong depression that most likely killed him?

Due to the high nerd factor, literary gossip tends to be lame, sure. But even by those standards, this is pretty tame stuff. That’s because it’s ultimately about The Work, which is the whole reason we all (okay, not all) developed such behemoth crushes on the dude (or “the dude,” if we’re doing the person/author/persona thing) in the first place.

Odds are both the crushes and the investigative fervor will be at DefCon 4 this spring, when the Harry Ransom Center hosts The David Foster Wallace Symposium (note definite article – it’s not just any DFW symposium, y’all), April 5 & 6. If you’ve ever seen even a fraction of the Wallace archives the HRC possesses, and you’re a fan/scholar, you know how rich the excavation in store could be. If you’re lucky, you’ll get to hold a trowel. Registration is limited and opens at 11am on Monday, January 23.

Bedside Manner: Chasing the 'Infinite' Dragon
What do you read next when you really, really loved what you last read?