By the pricking of our thumbs, some books wicked this way come 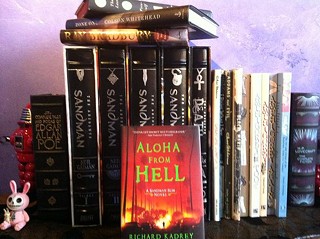 My bedroom bookshelves are groaning under the weight of the collective wordage they support. The sagging and spindly frameworks of my World Market-purchased twin shelving units have begun to cant perilously catawampus, so much so that I fear, somewhat, for my safety.

I tend to cram novels, periodicals, moldering flea market paperbacks, and one as-yet-unscathed iPad into the framework of these shelves with higgledy piggledy gusto. Everything I might crave is right at my fingertips because, really, who wants to run the risk of stumbling headlong over their coal-black canine at 4am while roaming to the living room in search of some literary soporific?

I have a recurring dream:

The whock-whock-whock of powerful rotors slicing the midnight air outside my window awakens me. In a panic, I leap from my bed to discover the source of the cacophony, predictably tripping over the goddam dog, my bike, and finally the coffee table before I manage to make my way through the black din to the window.

The blinding glare of a ten-thousand candlepower spotlight spears my embarrassingly nude form (this is a dream, after all) as I peer outside. Fuck. It's Roy Scheider and he's piloting the uber-chopper from Blue Thunder. Peering through my fingers, I can just make out the giggling form of Warren Oates riding shotgun. Scheider lifts the PA mic to his mouth and bullhorns an ear-piercingly emphatic message my way. Amid the rotor wash and the whine of Blue Thunder's suddenly Harrier-esque jet turbines, I hear Chief Brody call out: "You're gonna need a bigger bookshelf!"

Beside him, Oates, clad in the illogic of dreams as Sgt. Hulka from Stripes, takes a long pull from what appears to be a bottle of absinthe. He points at me and laughs, then grabs the mic from Scheider. "Hey kid! Put some clothes on already. This ain't no disco!"

With a papery roar like the toppling of God's own private library, the pair throttle up and away and pinwheel straight into the side of the Frost Bank Tower. I think: Screw you, suckas! Everyone knows absinthe and experimental, military-grade aircraft don't mix, not even in dreams. The resultant fireball is on a par with Michael Bay's wettest of dreams, but since I'm already moving in the slo-mo thick of the unreal, there's little I can do to get away, and, oh, fuck, there I go triple-gainering over the dog again.

I awake bathed in sweat and choking on the familiarly foul miasma that is my pug's rank exhalations as she frantically coats my face with "I need to be walked immediately, or else" kisses. Whew. That was a close one. And then, with tragicomic timing worthy of Buster Keaton, bedside bookshelf number one collapses. It's only the dumb luck of the terminally over-read that all five slipcased volumes of Neil Gaiman's Absolute Sandman -- together weighing in at 40-plus lbs -- miss pulverizing my groggy noggin by mere inches. Yeah, okay. Note to self: get fucking huge-ass bedside bookshelves, preferably made of titanium (with pleasant, writerly inlaid accenting, natch).

It's October 31st, which means that my reading of late has consisted of re-reading Ray Bradbury's Something Wicked This Way Comes, a book I've returned to almost every year since I first discovered it somewhere around age 14. Despite a series of strokes in recent years, Bradbury has kept up a literary pace that shames most other living authors, managing a new volume of short stories every 18 months or so, as well as scripting stage plays, memoir-ephemera, and -- another habitual October read on my part -- the deliciously atmospheric and elegiac 2001 collection From the Dust Returned, a sequel of sorts to his short Halloween classic The Homecoming (which first saw light of day, or, more accurately, dead of night in the pages of Mademoiselle magazine in 1946). Bradbury's prose has always been spare and lyrical; nobody describes the rustle of dead autumnal leaves or the velvet pleasures of nighttime better than he. The Homecoming is, for my money, the single most lovely evocation of the dark joy of All Hallows Eve and all its ghostly trappings ever to see print. That both it and Something Wicked have stood the test of time -- my time -- is proof, if any were needed, that Bradbury's literary voice speaks to all ages, not only to the young boy I once was but also to the older boy I have become. The magical literary spell Bradbury wove all those years ago (Something Wicked was an expansion on a short story -- The Black Ferris -- written in 1948) remains every bit as phantasmagorically powerful today. There are a handful of stories I'll take to my grave with me. Several will be by Ray Bradbury.

Also on Savlov's Bookshelf of Doom of late: Richard Kadrey's just-released Aloha From Hell, the third in a supernatural-noir series featuring wisecracking half-demon/half-human protagonist Sandman Slim. Kadrey's prose is raw and gutter-tough, Raymond Chandler meets Lux Interior at the Whisky a Go Go at the end of days.

Glen Duncan's The Last Werewolf is another stunner, chronicling the woeful misadventures of, yes, the last living epicurean werewolf as his days come, possibly, probably to an end. I realize that sounds cheesy-poof silly on the face of it, but Duncan, whose jacket bio notes that The Times Literary Supplement named him "one of Britain's best young novelists," has prose that's talon-and-pounce sharp, deeply intellectual, and altogether hopelessly romantic in the very best sense of the phrase. Sick to undeath of zombies already? This lycanthropic lunar jaunt into the mind of a doomed specie is highly recommended and ridiculously hard to put down.

Speaking of zombies, I haven't cracked Colson Whitehead's New York-based flesh eater apocalypse tome Zone One just yet, but it is at the top of my never-ending To Read list. In point of fact, I've voted it most likely to fall of the top of the stack and blacken my eye, given its precarious bedside perch.

Which reminds me. I've really got to get some better bedside bookshelves. Like, now.