Floppy is as floppy does 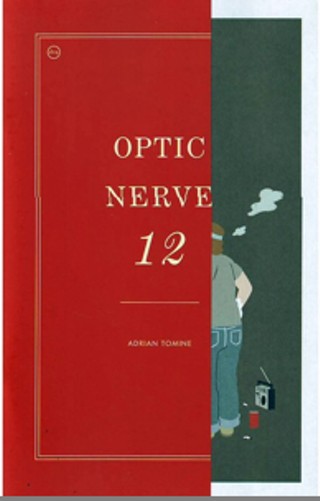 Who needs it hard all the time?

Just because this new volume of short stories by Adrian Tomine
(AKA the comix world’s second coming of Raymond Carver)
isn’t a perfectbound bastion of bookcase-puffing proportions,
that doesn’t mean that its contents aren’t as deep and deft
as that of what some people are calling graphic novels
these days.

In fact, since it’s published by Drawn & Quarterly,
that doesn’t even mean that, despite the book’s being
saddle-stitched and relatively thin, it’s other than perfectly printed
on fine thick paper befitting the creator’s superlative design.

Your sweetheart's skin should have such lovely texture.
But, okay, never mind that –

Look: Tomine, whose style may be recognizable to you
from numerous New Yorker cover and interior illustrations
if not from his previous, longer works (Summer Blonde
and Shortcomings, say), offers two main stories in this issue.

“A Brief History of the Art Form Known as ‘Hortisculpture’”
is a look at a would-be artist trying to get some recognition & respect
for the creations he’s become obsessed with bringing into the world;
it’s lighter and funnier than the typical Tomine-eye-view of angst-ridden youth
(and, whoa, there are no angst-ridden youth in this story) and rendered in a style
that nods to the drawings and panels of newspaper funnies
by way of telegraphing its relative levity.

Kind of like, we’re thinking, the Best Episode Ever of some modern, arts-oriented version of
"The Life of Riley” starring William Bendix as Riley, from radio’s Golden Age.

The rest of Optic Nerve #12 is taken up with a letters column,
wherein the author’s fans write in to congratulate or castigate him,
and an autobiographical comic about the various consequences
of releasing this sweet collection as a floppy.

“This sweet collection,” we say, because it’s highly recommended.

And because, if more “floppies” were this gorgeously produced, we’d be less likely
to wait around for any eventual hardcover compilations that might see the light of day.