She's got five of them, in fact:

Five issues of her self-published comic,
Toastycats, the first four of which were
discovered by your reporter while rummaging among
the self-published comics section at that bright emporium
of pop & mostly hero-driven creativity, Austin Books & Comics.

Because you never know what you're gonna find
in such a generally overlooked part of a comics shop.

Tell you what: Usually? It won't be brilliance like this.

Pity it's not a local product: The creator dropped a bunch
of copies of her comics off at ABC (and at Domy Books, too)
while in the ATX for South by Southwest this past Spring.

She's originally from Poland, see –
that name of hers isn't indicative of just
some kolache-scented roots in Fredericksburg –
and she's spent a lot of time in England and now
she lives in Sweden …

But her artistry & imagination is beyond nationalities,
is the sort of multinationality that borders the lands of Faery & Outer Creepytown
and, in general, territories similar to where Amanda Palmer's husband
makes his living mining the darker veins of.

You'd have to be a comics aficionado for this next comparative
to make any sense to you … but we mentioned E. Gorey for pop appeal
and now we're going to go a little deeper for those who know:

What Magda Boreysza is does is not unlike
the creations of an enchanted Rapidograph possessed by
the battling souls of Al Columbia and Kate Beaton.

Eerie.
Fucking brilliantly eerie, and also hilarious, with illustration skills to die for.

You can see, in the first four issues of Toastycats,
the progression from a sort of sketchbooky catch-all,
to a collection of interwoven mini-stories, to a continued feature ("The Seed") …
but what you're going to see in all of them of is penwork that will break your heart
while the shadowy twists & turns of the artist's imagination boggles your enthralled mind.

(You know you're in good company, we reckon, when the person responsible
for what you're reading dedicates an issue to the memory of David Foster Wallace
and includes quotes from Vonnegut and The Silver Jews
and a cameo by the disembodied head of James Joyce.)

So go to Austin Books or to Domy, Austin-based friend.
Or order the comics directly from Boreysza's website.

Quickly, now – before the shadows close in. 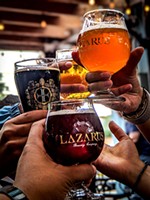 Lazarus Opens on Airport, J-Prime Opens Downtown, Old Thousand and JewBoy Bring the Holiday Fusion, Hanukkah Gets the Haute Cuisine, and Everything Is Beginning to Look a Lot Like Christmas
All the news that’s fit to get your taste buds quivering