The stories behind the stories we're reading right now

“There was something about the luxury of the Welland house and the density of the Welland atmosphere, so charged with minute observances and exactions, that always stole into his system like a narcotic.”

“The heavy carpets, the watchful servants, the perpetually reminding tick of disciplined clocks, the perpetually renewed stack of cards and invitations on the hall table, the whole chain of tyrannical trifles binding one hour to the next, and each member of the household to all the others, made any less systematized and affluent existence seem unreal and precarious.”

As you might have gleaned from the passage above, which I dog-eared just for the pleasure of the prose, I’m reading Edith Wharton’s The Age of Innocence – for the first time, in fact, which is odd considering my desert island list of novels would have to include The House of Mirth. 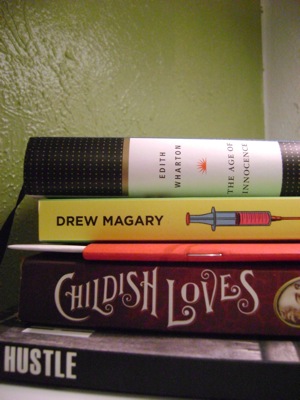 Last month, in an insomniac stretch, I sped-read Daisy Goodwin’s benign but still enjoyable enough Gilded Age novel The American Heiress, which was published stateside this summer and owes a pretty major debt to Edith Wharton. It got me hankering for the real deal.

The Age of Innocence came out in 1920, and is set in the 1870s, but it still feels incredibly fresh. Consider this: When Newland Archer, the book’s well-heeled protagonist, gets up the nerve to break off his engagement to May Welland and declares himself to her cousin, the Countess Olenska, literally the moment he finally makes his move, a telegram arrives from May to say that her parents have agreed to move up their wedding – a hastening Newland pushed for, as a way to brake-stop his roiling passion for the Countess. How does Newland react? How else could he react? He laughs his head off.

Irony: We didn’t start the fire.

The rest of the books on the nightstand – top to bottom: Drew Magary’s The Postmortal; Tiff Holland’s chapbook Betty Superman; Benjamin Markovits’ Childish Loves; and Jason Skipper’s Hustle – I haven’t even cracked the spine on. But I will soon; all of the authors have readings in Austin scheduled. I’ll keep ya posted.

The stack on the floor constitutes something of a teaser: It’s all research fodder for a fall film series I’m programming (very, very excitedly) for the Austin Film Society. 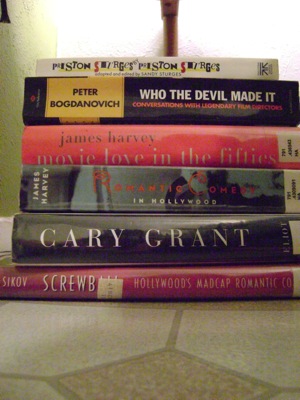 The top two – Preston Sturges by Preston Sturges, Peter Bogdanovich’s Who the Devil Made It – I bought used off the internet a month or so ago; so far I’ve just read bits and pieces. (Enough to know that – no surprise – Preston Sturges was just as delightful a memoirist as he was a screenwriter.)

The bottom four I checked out from the downtown Faulk Library this weekend, though at one point I owned my own copies of James Harvey’s Romantic Comedy in Hollywood and Movie Love in the Fifties. I have no idea where they went. It’s possible I sold them in one of my broker-than-usual periods. (I’m terrible with money – like I said, Lily Bart really spoke to me.)

Romantic Comedy was a gift from an old boyfriend, so it’s also possible I chucked it out in a misplaced fit of “gonna-wash-that-man-right-outta-my-library” bull-headedness, but I don’t think I’d take a breakup out on a book. More likely, they were carelessly loaned out, or lost in one of the gazillion moves I’ve made over the years. I remember Romantic Comedy was one half of a two-part Valentine’s Day gift, the other half being some see-through, frothy-pink pajamas, which were referred to – elegantly, but still, erm, explicitly – in an accompanying note that I tucked inside the front jacket of the book. Wherever that book is now, the note must be with it, in the kind of wincing gaffe that would’ve fit right in with the screwballs that Romantic Comedy makes its subject. I’ve steeled myself to the possibility it’ll show up in a Found Magazine someday, or returned to me, with a snicker, from whichever friend I might’ve lent the book out to.

Irony, or just idiocy? You make the call.