The Cunning Stunts of Miracle Jones 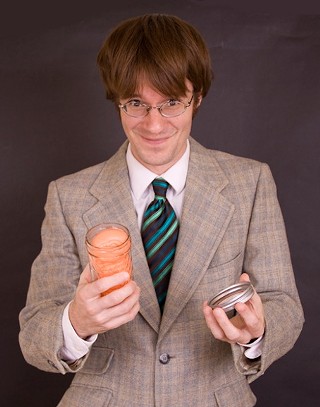 It’s a bit difficult to plug a flash-drive into the back of your Mac when that flash-drive is embedded in a cheap artificial vagina.

Actually, never mind the specifics: It’s difficult to plug such an encumbered flash-drive into any computer’s USB port, what with the pale pink tube of thick and pliant rubber flopping around as you maneuver the harder bits together.

Of course, we’re not talking about just any artificial vagina with a flash-drive embedded in it.

No, this is the artificial vagina with the flash-drive containing Soil, the new short-story collection from Fiction Circus, embedded in it.

In flash-drives of four gigabytes of storage each.

Before we go any further in talking about this preposterous packaging stunt, let’s mention the fiction of Fiction Circus. Let’s mention that it’s often pretty damned good and certainly always at least interesting, whether it’s one of the perverted eroticentric tales by Jones himself, or some other kind of story by the guest authors featured on the FC website.

(Note: We recommend this one, for starters.)

Sensational as this gambit of (ahem) meatspace distribution is, we wouldn’t give Miracle Jones the time of day if what was being thereby delivered wasn’t worthy of some attention on its own.

But since it is worthy of some attention, we figured we'd best go whole hog and ask the author himself a few questions, you know?

Brenner: Jones, Seed was bad enough. A little green rubber cock with a flash-drive. But this Soil of yours, in its own Mason jar, it’s … Dude, what did you do, anyway? You just went into some sex shop and were, like, “Yo, I need an artificial vagina for my stories” or what?

Miracle Jones: I’ve been in a lot of sex shops in my day, Brenner. So I’m a good sex-shop client, and I asked them, “What are your cheapest vaginas?” And they thought that was pretty funny. And they showed me to the clearance rack. And those were all really gross, because the market for, y’know, flesh vaginas, it’s not very, um, although the company that makes Fleshlight, which is like the premium? That company’s located here in Austin and I think they’ve flooded all the local sex shops with Fleshlight propaganda.

Brenner: So this one containing the Soil collection isn’t an actual Fleshlight?

Brenner: And this Soil thing is more, what, bargain-basement?

Jones: Well, it’s quality material. But, at the same time, they’re made in volume, they’re not going to go out of business any time soon. These are like the meat-and-potatoes of artificial vaginas, y’know, and, plus, they look good with green.

Brenner: Green? Oh, with those Seed things of yours.

Jones: Yeah, and when I first did those? The girl I was dating at the time got really pissed. She was like, “If you’re gonna publish stuff in a dick, you have to publish it in a vagina, too!” And I thought, “I guess that’s true … I guess I do have to do that.” So I kept that in my head, and that became The Thing That Was Gonna Happen Next, once I had enough stories done for a new collection. And once I thought about it – flash-drive in a penis, flash-drive in a vagina – I realized that, this way, computers could do it with each other – which would be awesome! And the two collections could mate! So, Seed and Soil. And I know it’s both sides of heterosexual intercourse. I mean, I considered using a fake asshole, too, just to be, like, completely inclusive? But I think everybody understands that this pairing is just the, uh, the classic one.

And if you understand that, too, reader?

And if you found this blogpost at all interesting or amusing?

Then the sort of things that Miracle Jones writes – strange, provocative things, riddled with much sex and the occasional social insight or absurdity – are right up your alley.