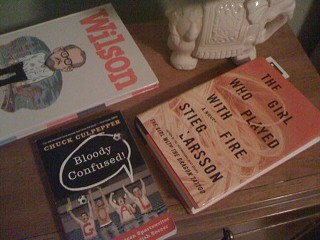 As a proofreader I read for a living. You'd think I wouldn't want anything to do with the written word in my off time, and sometimes I don't. But I love to unwind before I go to sleep with a good book or the sports page. That is, unless I'm feeling digital, in which case I'm checking out Twitter/Facebook, my fantasy football players, or texting friends on my iPhone.

There are three books pictured here on my bedside table along with my mother's elephant lamp. One I've read (twice), one I'm currently reading, and one is on deck. Let's start with the one I've finished.

The newest graphic novel from the mind of Academy Award nominee Daniel Clowes (Ghost World) has hit the shelves and I couldn't wait to get my hands on it. I've been a huge fan of Clowes and his "comic" Eightball since day one and always anticipate his next release, even if the wait is longer than I'd like. His latest, Wilson, is some of his finest work to date.

Rendered impressively in various visual styles throughout its 70 one-page strips, it follows the later years of the lonely life of sad-sack Wilson and his forced, unsolicited, and awkward interactions with strangers. Along with the strangers he comes across his troubled ex-wife, a daughter he didn't know he had, and his constant companion and best friend, his dog. Even a man as misanthropic as Wilson can appreciate the companionship of a loyal dog.

For a real review of Wilson, read "Getting Bitter All the Time" by the Chronicle's own Wayne Alan Brenner. Posted in July of this year, he describes the brilliance of this graphic novel way better than I could dream of doing. And yes, this book has been resting peacefully on my nightstand since July, usually underneath whatever it is I'm reading at the time. Maybe I like the comfort of knowing there are people more miserable than myself in this world. Considerably more miserable.

During my last staycation I devoured The Girl With the Dragon Tattoo by Stieg Larsson. I recently traveled to Las Vegas, and I would say that, without exaggeration, more than half of my fellow travelers were reading one of the books from this series.

While not on the literary level of a Cormac McCarthy or Hubert Selby Jr. (two brilliant writers who have little use for most punctuation!), Stieg's story is immensely fascinating and truly a page-turner. I completed this book faster than any other this year simply because I could not wait to see how it would play out. Probably because I have less free time at the moment, I am slowly trudging through the second novel, The Girl Who Played With Fire. I'm currently about 200 pages in, hopefully it will catch my attention in the way the first one did soon, although it is still a pleasurable read.

Finally, on deck, we have Bloody Confused: A Clueless American Sportswriter Seeks Solace in English Soccer by Chuck Culpepper. Recommended and loaned to me by co-worker Mike Harrell, it is apparently what is purports to be. I have always been fascinated by the loyalty and compassion of British (and other) soccer fans and I'm very curious to read Culpepper's tale of a Yank immersing himself in the world of European football.