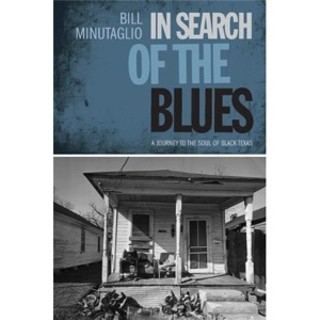 A heads up for Bill Minutaglio, who will be signing and discussing his new book – In Search of the Blues: A Journey to the Soul of Black Texas – tomorrow (4/27) at Texas State University in San Marcos.

Just published in softcover by the University of Texas Press in its Southwest Writers Collection Series, the book collects 15 feature stories from the Eighties and Nineties written mostly for the Dallas Morning News and the Houston Chronicle – although one of the most moving pieces originally appeared in, of all places, the Sporting News (1996). That’s a profile of professional football coach Ray Rhodes (currently with the Houston Texans), in which Minutaglio suggests volumes about Rhodes’ no-nonsense personality by evoking the small-town racial history of his home in Mexia, Texas – where it’s likely that one of his ancestors was the victim of a lynching. A relative quietly directs Minutaglio to the site of the still visible hanging tree.

It’s not the only hanging tree Minutaglio found in Texas in those years, when he wrote for various Texas publications, often about the poor sides of town, generally populated by African-Americans. “These stories were written over thirty years in Texas,” he writes in the introduction. “They take place in Mexia, San Antonio, Houston, New York, and Dallas. They are a form of odyssey – a white writer’s chronicle of things he heard and experienced in Texas.” Although the stories themselves remain as published, Minutaglio has framed each with an evocation of the original circumstances and context, and a brief report on what’s happened to the subjects since.

Minutaglio, currently a "clinical professor of journalism" at UT-Austin, is best known recently for workmanlike biographies of George W. Bush, Alberto Gonzales, and Molly Ivins. In his introduction, he takes some pains to consider and address what drew him to these subjects as a young reporter, the ambivalent history of a young white writer in racially charged America, but the stories themselves – on black people, black community, black music – require little extraneous defense or explanation.

You will, however, find yourself wondering when and why, precisely, did such extended and writerly meditations on public subjects disappear almost entirely from daily newspapers, and where might they now find a home in our high-speed, cyber-dispatch world. Blessed by patient editors with better resources, Minutaglio took the time and space to live, observe, and write these stories about the harsher and deeper edges of African-American life in Texas, which he suggests hasn’t changed all that much in ensuing decades.

It’s good to have these stories collected here.

Bill Minutaglio, In Search of the Blues