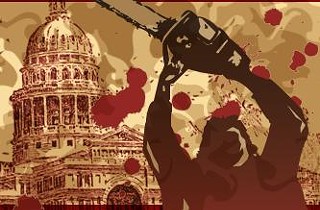 The World Horror Convention just wrapped up a successful weekend in Brighton, England, and now the countdown to the 2011 iteration, scheduled for right here in Austin, has begun. One person who will definitely be attending is the author with Mucho Mojo, Joe Lansdale. "I'm the toast master," he explained recently, "so I guess I gotta show."

Aside from Lansdale, the four-day literary event has already conjured a very serious talent pool, including 30 Days of Night creator Steve Niles (whose Wake The Dead and Bigfoot comics have just been sold to studios). Two-time Bram Stoker award winner Sarah Langan will also be making the trip to Austin, as will literary zombie maestro Brian Keene.

So what has the master of Nacogdoches noir been up to recently? Turns out, he was in Austin a few weeks ago with his old friend and literary hero Michael Moorcock "He was doing real good," said Lansdale. "He's off the crutches and on the cane. We had dinner and a long talk. He just finished a piece for Planet Stories, one of his older works he's revised and they'll be publishing it."

As for Lansdale himself, he's finishing a new book about his east Texas ne'er-do-well Hap and Leonard book while working on a young adult novel about the Great Depression called All the Earth Thrown to the Sky. Throw on top of that pile a screenplay for his original Hap and Leonard novel, Savage Season. So what about the long-promised adaptation of The Bottoms, which Texas Film Hall of Famer Bill Paxton has been eyeing for a while. It's still coming. Lansdale said, "I did an adaptation, and I think that they thought that it was a little too much like the book, so they're bringing in another writer." Without naming names, he said, "It's someone I like and respect a lot, so I'm hoping it will turn out well."

Hopefully the film will be closer to production when World Horror Convention 2011 arrives in Austin, April 28-May 1 of next year. Register at www.whc2011.org. 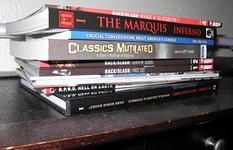