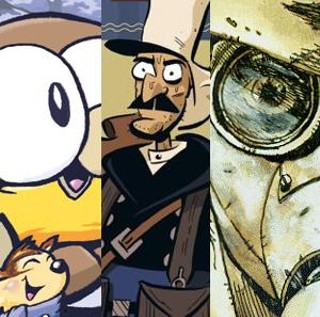 With some wet weather heading this way, the only thing better to do than sit home and read comics is to head to the Staple! indie media expo to meet some big name indie comics creators.

First up is arguably the biggest name of the day: Guy Davis (12-1pm). Probably best known as the artist for Hellboy spin-off BRPD, he was an industry icon with work on Sandman Mystery Theatre and his creator-owned The Marquis before he took on that enviable day job. Stylistically, think of him as Howard Chaykin to Hellboy creator Mike Mignola's Jack Kirby.

A little more family-friendly is Andy Runton (1.30-2.30pm), whose remarkable and delightful Owly graphic novels are the melding point between traditional kids' books and comics. Plus, they are ridiculously sweet and totally wordless, making them absolutely universal.

Of the three out-of-town guests, Chris Schweizer (3-4pm) is arguably the most traditionally "indie," with his historical adventure series centered around the Crogan bloodline of two-fisted action heroes becoming a sleeper success for Oni comics.

Showing strong for the local end of things will be the live-action comics extravaganza that is The Intergalactic Nemesis (4.30-5.30pm).

The convention runs 11am-7pm, March 6. As always, the event takes place at the Monarch Event Center, 6406. N. I-35 (north of Koenig, next to Highland Mall.) Admission is $5 on the door, and there will be plenty of vendors, dealers and artists (seriously, bring cash: It's a collector's dream.)