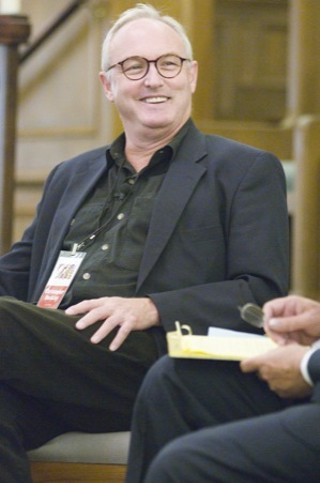 Christopher Buckley at the Texas Book Festival (by Bret Brookshire)

At the time the Texas Book Festival booked Christopher Buckley, they couldn't have known how exquisite the timing would shake out to be. Buckley – who, by the way, is a leading conservative and son of William F. – was supposed to be in town to promote his new novel Supreme Courtship, a D.C. satire, but then The Daily Beast published on Oct. 10 his endorsement of Barack Obama ("Sorry, Dad, I'm Voting for Obama") and all hell broke loose.

"What a kerfuffle all this has been," said the genial Buckley on Saturday in a conversation led by longtime family friend Steven Isenberg. The occasional mock hem-and-haw that they get back to promoting his book aside, Buckley gamely recounted the spiraling madness that led to his break from leading conservative magazine The National Review – a magazine that his father started and that Christopher maintains partial ownership of. In the wake of his Obama endorsement, which irked some NR readers so that they cancelled their subscriptions en masse, Buckley said he felt the "honorable to do was to offer to resign" – with an emphasis on offer. The offer, he smiled ruefully, "was briskly accepted," thus leading to the rather "awkward position of being fired by something I partly own."

Buckley went on to lament the self-seriousness; in his father's day, he said, the appropriate response would have been to roast the dissenting voice with rigor and enthusiasm, but not to dramatically sever all ties – an indicator, he said, "of how tribal politics have become."

The far-ranging conversation also touched on his novel, centered around a Judge Judy type ascending to the Supreme Court – an institution Buckley conceded doesn't exactly have built-in comic appeal ("How many jokes do you know start 'three Supreme Court justices walk into a bar...'?"); Buckley's time as a speechwriter for then-vice-president George H.W. Bush (including a very funny retelling of the time H.W. tripped over the name Thucydides in one of Buckley's speeches); and the appeal – to a satirist, at least – of a "target-rich" Palin/McCain administration.

But if there was any lingering question over what Buckley's relationship to the Republican party, he neatly summed it so: "In 2000, I voted for a 'conservative Republican.'" He then ticked off the fruits of eight years under Republican rule – a ballooning deficit, "an ill-premised war – maybe two," and what he perceives as the nationalization of banks. He turned to the audience. "Tell me why I shouldn't vote for the Democrats." And the crowd went wild.