Saturday night's the right night to like books in Austin town

Susan Orlean adapts to the situation (by www.susanorlean.com)

Chances are you already have your Halloween plans in order, but have you considered Saturday night yet? If not, the Texas Book Festival and the Austin Jewish Book Fair are here to help.

TBF's annual event at the Continental Club is traditionally hipster central – well, book lovin' hipsters, at least. This year, the hot ticket item is the Paris Review's Philip Gourevitch conversation with novelist/former The Wire scripter Richard Price. (Speaking of, have you heard his Moth piece about racial profiling that was broadcast on This American Life a couple weeks ago? Based on voice alone, the guy's got a hell of a delivery.)

If you want to avoid the logjam at the Continental Club, you might want to try the Dell Jewish Community Center (7300 Hart Ln.) instead. That's where Evan Handler (Harry from Sex and the City) will be holding court, as the official opening night guest of the Austin Jewish Book Fair. He'll be talking about It's Only Temporary: The Good News and the Bad News of Being Alive, his humorous memoir about battling leukemia in his mid-20s.

Wait, you want more? Okay, how about Susan Orlean at the Alamo South Lamar? Orlean will be at the Texas Book Festival promoting her new children's book, but the Alamo event is strictly are R-rated, as she screens Adaptation, the Spike Jonze/Charlie Kaufman film loosely adapted from her nonfiction piece The Orchid Thief. Alamo programmer Lars Nilsen will conduct a Q&A with Orlean, in which she will presumably share how totally awesome it must be not only have Meryl Streep play you on the big screen, but to have Meryl Streep playing you tripping balls on orchid dust.

Tickets for Orlean's event can be purchased here, along with Sunday's screening at the Ritz of Bonnie and Clyde (EW columnist Mark Harris, who wrote the fascinating critical history Pictures at a Revolution, had to drop out of the event due to a family emergency). The other two events are free, but we suspect they'll be crowded, so show up early. 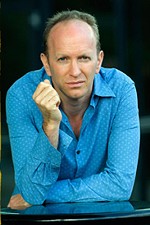