A Tale of Terror From the Top of the World 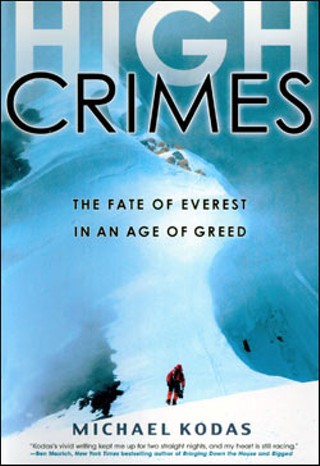 When I was in college I had a good friend who was a very skilled rock climber. He made it look so simple -- so simple and effortless that when he asked me if I'd like to learn how to climb I didn't hesitate to sign on. So we went to a popular climbing spot not far from Washington, D.C., for my maiden -- and as it happened, only -- voyage up a big-ass rock. I'd been hiking and trail running for quite some time and thought (silly me) that this whole rock climbing would be a piece of cake. I was way wrong.

I enjoyed the climb – scrambling to the top of the rock was no problem. But fixed to the rope at the "summit," I froze. I had to let go, my friend said, and repel down. Sounds simple, but I was completely petrified. I had to release whatever control I thought I had up to that point. My palms were sweaty. I knew I was in good, capable hands, but I couldn't shake my fear. I finally made it down, but it was the last time I took to the rocks.

The fear that gripped me some 15 years ago seized me again while reading High Crimes, a true story of terror atop the world's highest peak, Mt. Everest. In his new book (published in February by Hyperion; $24.95), Pulitzer-winning journalist Michael Kodas writes about the ill-fated expedition in 2004 of Connecticut climbers (Kodas was among them) that paralleled the deadly journey of another American climber, Nils Antezana, a Bolivian-born doctor. (In the interest of full disclosure, I should note that Kodas is also a friend of mine.)

The story is hair-raising and lays bare the excitement and fear that face great explorers at the top of the world. Years after Sir Edmund Hillary's first summit in 1953, the number of climbers that make it to the top of Everest has increased dramatically -- from just 98 climbers in 1996 to a whopping 526 in 2007. With the growing number of climbers, however, has come a burgeoning and completely unregulated economy, fueled not only by helping hands, but also, increasingly, by mountain pirates -- con men, and, it would seem, even murderers.

Sitting in the hot summer sun in Texas is not enough to keep the chills of fear from tearing down your spine while reading Kodas' chilling tale of greed, and ambition, atop Everest. Well written, and as deftly plotted as the finest mystery novel, Kodas brings to life a disturbing picture of society at altitude -- one that commands you to climb to the top and then to let go, repelling to the bottom of the tale. You'll be glad you did.

The Tortilla Strip
A trio of taco joints spice up midtown

Tale of the Lion Tamer
Former WWE wrestler Chris Jericho's autobiography, released today, talks about the art that makes choreographed entertainment out of a sport.