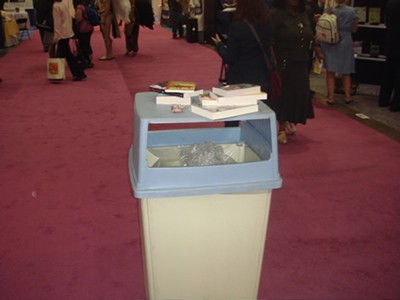 Book Expo America: Where Books Go to Party
My feet are still recovering from tromping around one of the world's largest book industry gatherings, Book Expo America. Everyone says this year's Los Angeles event wasn't near as crowded as last year's in New York City (naturally, since NYC is ground zero of the publishing industry), but, as I arrived to hawk my novel Evacuation Plan at my publisher's booth, I was thrown into a sea of booksellers, Dr. Ruth, publishers, Kevin Nealon, librarians, Cheech Marin, publicists, Arianna Huffington, authors and vacuum cleaner salesmen?

Dagoberto and the Downtown Book Club
For its inaugural Downtown Book Club at the Faulk Central Library, the Austin Public Library is one-upping your garden-variety book club by inviting the actual author to attend and engage in the conversation. With a lesser book, one might worry about the mix (awkward much?), but the book – The Flowers – is highly acclaimed – and the author – Dagoberto Gilb – is already an Austin institution. Here's some of what the Chron's Belinda Acosta had to say when The Flowers came out in February: "From the first measured words of Dagoberto Gilb's new novel to its final, heart-wrenching exclamation, Gilb takes readers through a journey that is both startling and inevitable... [Gilb] writes with enormous acuity, heart, and, most importantly, a deep respect for even the most unsavory of his characters and their deeds." The Downtown Book Club convenes Monday, June 2, at 7pm at the Faulk Central Library (800 Guadalupe St.). More info can be had by going here or by calling 512-974-7400.

Weighing In
When Austin-based author Stephanie Klein (Straight Up and Dirty) set out to memorialize her years at "fat camp" – first as a camper, later as a counselor – she had plenty of material to work with: namely, her childhood diaries, from which she quotes at length. Weight-obsessed and frequently wincing, Klein's diaries will touch a nerve with any woman who hasn't completely blocked out being a girl. Moose: A Memoir of Fat Camp (out today) isn't a rah-rah kind of a book; while Klein comfortably skips between chatty and bracing (and sometimes exasperating), she's always brutally honest about her lifelong battle with her weight. Klein kicks off her book tour tonight at 7pm at BookPeople (603 N. Lamar) with a camp food buffet of hot dogs and s'mores. (Is this some skinny somebody's idea of a joke? Because it's sooooo not in the spirit of the book, unless BookPeople wants you to follow up the party with a weeklong bender of self-loathing and cabbage juice, or some other "miracle" diet directive.) She'll also appear at Barnes & Noble (1000 Research Blvd.) on June 29 from 3-4pm. Fun fact: The UK's Observer recently ranked her confessional blog, Greek Tragedy, as the 26th most powerful in the world.

The Evangelicals Behind the Velvet Curtain
According to bestselling author Christine Wicker, we've been lied to. For years we've been told about the boundless power of the "religious right" – a supposedly homogeneous group comprised of millions and millions of vociferous and devoted evangelical Christians. Think President George W. Bush, or James Dobson and his group Focus on the Family – evangelical Christians whose opinions are heard loudly on talk radio or in the press commenting on various social issues, like abortion or same-sex marriage. Indeed, we've been told, by evangelical groups, that their numbers are, frankly, staggering – that they make up some 25% of the population, more than 50 million Americans. If true, that would make the evangelical religious right a juggernaut. But, as it turns out, there are nowhere near that many evangelicals, Wicker, a former religion reporter for The Dallas Morning News, writes in her latest book, The Fall of the Evangelical Nation. Based on numbers provided by the churches themselves, Wicker estimates that they're probably closer to 7 percent of the population – and their numbers are actually in decline. The evangelicals simply aren't out there saving people in droves. And that changes everything. Wicker's book is an engrossing read, a fascinating exploration of how evangelical Christian beliefs have been hijacked by political voices – like, say, that of former Bush strategist Karl Rove – how the media allowed this to happen and, importantly, how evangelical adherence to the Bible as the inerrant word of God has pushed the faith into a corner, making it a branch of Christianity that is increasingly stuck in time, out-of-step with a changing world, and, it would seem, at least in its current form, slowly, but quite surely, fading.

Book Cart Can-Do
Remember when we told you last week about Austin Public Library's awesome and awesomely award-winning book cart drill team, the Bibliofiles? And remember how you felt when you watched the video and thought, "Well, this looks alright for grainy, faraway footage, but what I really want is to see that action live and in living color"? omigod it's your lucky day. Okay, actually Saturday is your lucky day. That's when the Bibliofiles do their book cart dance at the Monster Book Sale in the North Star Home Center (2209 West Anderson Lane). Added bonus – there's a monster book sale... videos, CDs, DVDs, too. All proceeds benefit APL. For more info, go here. UPDATE: We hear the Bibliofiles are set to perform at 2pm.

Suddenly This Summer
Two announcements from UT's Harry Ransom Center landed in our in-box this morning detailing acquisitions both big and small – although I suppose when you're talking about authors of this stature, no acquisition counts as too small. The first is the addition of two unpublished letters to the HRC's pre-existing Tennessee Williams collection. Both letters are written by the lauded American playwright to Pancho Rodriguez Gonzalez, who inspired the character of Stanley Kowalski in Williams' A Streetcar Named Desire and was, as the HRC's press release puts it, Williams' "former intimate" (a rather coy moniker for a man who, according to Donald Spoto's 1994 biography The Kindness of Strangers , was on the losing end of a passionate and devoted affair with Williams).