Brendan Short, ZZ Packer put on readings
We've only had a chance to read the first couple of chapters of Dream City, Michener Center alum Brendan Short's debut novel, but so far it's a hell of a read – finely written and researched (it's set in Depression-era Chicago), with an intriguing multiple narrative following the family Halligan – the brutish heavy Paddy, slowly suffocating mom Elizabeth, and 6-year-old Michael, who takes comfort and courage in comics heroes like Dick Tracy. But don't take our word for it – why not hear Short read in person tomorrow night at BookPeople (6th and Lamar)? That's Tuesday, Nov. 25, at 7pm. The following week, Michener will play host to a reading from visiting professor ZZ Packer (Drinking Coffee Elsewhere) on Thursday, Dec. 4, 7:30pm, at Avaya Auditorium (ACES 2.302) on the UT campus (located at the southeast corner of 24th & Speedway). Both readings are free and open to the public. For more info, visit www.utexas.edu/academic/mcw.

See, Poetry Does Pay
A belated congratulations go to poet and UT assistant professor A. Van Jordan, who was named on Monday as a 2008 United States Artists Fellows. USA, a national artists advocacy group, awarded fifty $50,000 grants to artists from eight disciplines, including literature, architecture and design, and theater arts. And it's good company Jordan's keeping – living legend Barry Hannah made the cut, too. Jordan has previously won the Whiting Award, the Annisfield-Wolf Book Award, and a Pushcart Prize. His collection Quantum Lyrics was published by W.W. Norton. 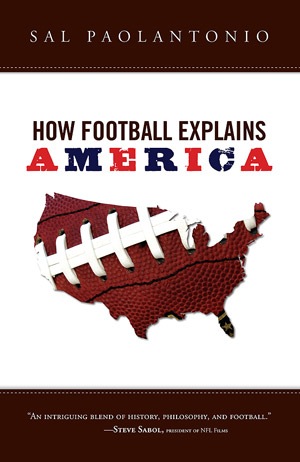 'How Football Explains America'
I found Sal Paolantonio’s How Football Explains America (Triumph Books, $24.95) in the “Sports” section of a local Barnes and Noble, and now I plan to write a note of complaint. Although peppered with amazing facts and trivial treats (did you know Richard Nixon asked John Mitchell to investigate Vince Lombardi as a possible running mate in 1968?), Paolantonio’s book is less a meditation about football, and more a book on the cultural relevance of the game. Paolantonio, a former history major at the State University of New York at Oneonta, introduces his meaty thesis that football is a dramatic tale that explains why Americans do as America does, with the story of the New York Giants achieving a perfect story by defeating the New England Patriots in the Super Bowl and ending a perfect season. From there, Paolantonio details how football explains Manifest Destiny, Daniel Boone, Davy Crockett, Alexis de Tocqueville, John Coltrane (a personal favorite of mine), West Point, the television show Father Knows Best, and finally, how football explains “us all."

A Dyke To Watch Out For
This week, Alison Bechdel is in town. The Dykes to Watch Out For author will appear at UT on Thu., Nov. 6 and will be signing her new book at BookPeople, The Essential Dykes to Watch Out For, Fri., Nov. 7, 5pm. Those who have been readers of the strip, now in circulation for over 25 years, know what a talent Bechdel is. Even if you haven't read DTWOF, Bechdel's Fun Home, a graphic novel which concerns her process of coming out, but also the death of her father (and subsequent discovery that her father may have been gay also). It is a carefully considered and beautifully rendered narrative, which mixes memoir and theory. And I ain't the only one who thinks so! Also: Bechdel has a blog. 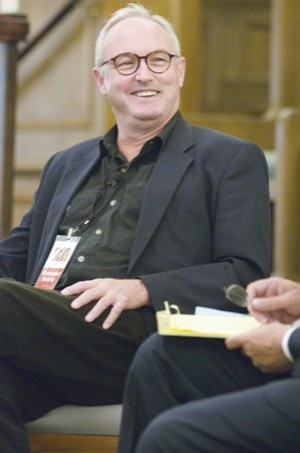 Christopher Buckley on Being Christopher Buckley
At the time the Texas Book Festival booked Christopher Buckley, they couldn't have known how exquisite the timing would shake out to be. Buckley – who, by the way, is a leading conservative and son of William F. – was supposed to be in town to promote his new novel Supreme Courtship, a D.C. satire, but then The Daily Beast published on Oct. 10 his endorsement of Barack Obama ("Sorry, Dad, I'm Voting for Obama") and all hell broke loose. "What a kerfuffle all this has been," said the genial Buckley on Saturday in a conversation led by longtime family friend Steven Isenberg. The occasional mock hem-and-haw that they get back to promoting his book aside, Buckley gamely recounted the spiraling madness that led to his break from leading conservative magazine The National Review – a magazine that his father started and that Christopher maintains partial ownership of. In the wake of his Obama endorsement, which irked some NR readers so that they cancelled their subscriptions en masse, Buckley said he felt the "honorable to do was to offer to resign" – with an emphasis on offer. The offer, he smiled ruefully, "was briskly accepted," thus leading to the rather "awkward position of being fired by something I partly own."

Staff Recommends Library Architect
City staff has recommended to city council a first-place choice for the architectural design of the new central library: Barnes Gromatzky Kosarek Architects and Taniguchi (both Austin firms) with Holzman Moss, a joint venture. The BGK team stressed a design process that would involve substantial public participation and community input. The agenda item posted follows. Over 400 public comments on the three finalist proposals had been received online as of 4 pm today. The online form remains up and comments can be made through 12 midnight tonight, at www.cityofaustin.org/library. 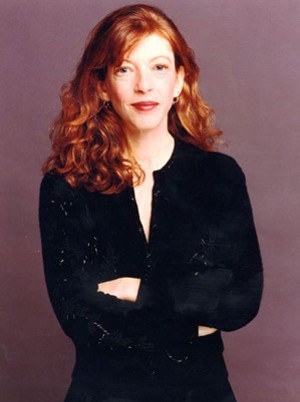 Cutthroat Counterprogramming
Chances are you already have your Halloween plans in order, but have you considered Saturday night yet? If not, the Texas Book Festival and the Austin Jewish Book Fair are here to help. TBF's annual event at the Continental Club is traditionally hipster central – well, book lovin' hipsters, at least. This year, the hot ticket item is the Paris Review's Philip Gourevitch conversation with novelist/former The Wire scripter Richard Price. (Speaking of, have you heard his Moth piece about racial profiling that was broadcast on This American Life a couple weeks ago? Based on voice alone, the guy's got a hell of a delivery.) If you want to avoid the logjam at the Continental Club, you might want to try the Dell Jewish Community Center (7300 Hart Ln.) instead. That's where Evan Handler (Harry from Sex and the City) will be holding court, as the official opening night guest of the Austin Jewish Book Fair. He'll be talking about It's Only Temporary: The Good News and the Bad News of Being Alive, his humorous memoir about battling leukemia in his mid-20s. Wait, you want more? Okay, how about Susan Orlean at the Alamo South Lamar? Orlean will be at the Texas Book Festival promoting her new children's book, but the Alamo event is strictly are R-rated, as she screens Adaptation, the Spike Jonze/Charlie Kaufman film loosely adapted from her nonfiction piece The Orchid Thief. Alamo programmer Lars Nilsen will conduct a Q&A with Orlean, in which she will presumably share how totally awesome it must be not only have Meryl Streep play you on the big screen, but to have Meryl Streep playing you tripping balls on orchid dust. Tickets for Orlean's event can be purchased here, along with Sunday's screening at the Ritz of Bonnie and Clyde (EW columnist Mark Harris, who wrote the fascinating critical history Pictures at a Revolution, had to drop out of the event due to a family emergency). The other two events are free, but we suspect they'll be crowded, so show up early. Oh, and happy book fest-ing. 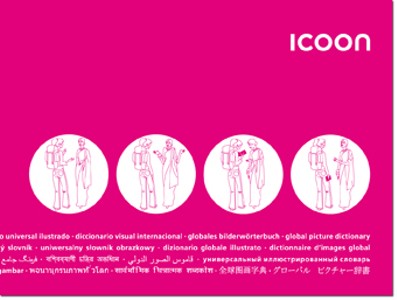 Never Mind Those Thousand Words
You want something when you're in a foreign country: Eventually this is true. You want to go somewhere, you want to find someone, you want to purchase something. Hell, maybe you just want to use a toilet, even if it might be a toilet unlike any other you've seen in your life thus far. But, ah, damn, you can't make yourself understood. You don't speak the local language; the locals don't speak your language. What's a monoglot to do?

ICOON, which sounds like some provocative cyber-project from William Pope L., is a perfectbound booklet packed with precise line illustrations and full-color photos of people and things and situations. The idea is, you carry this mini-tome (written and gorgeously designed by Gosia Warrink) with you on your travels, and when language is a barrier, you simply locate an illo of what you're trying to communicate and then point it out to the person you're trying to talk to.

Brilliant? We think it might be called that, sure, especially as its precise and pleasing images are arranged in handy categories like "clothing," "hygiene," "health," "money," "food," "emotions," and so on. And, even if you're not planning on traveling beyond the borders of your own lingo's comfort zone anytime soon? It's quite a sweet little volume to peruse and share with others, and at $10 would make an excellent stocking stuffer for that holiday [points to image of Santa Claus] coming up. 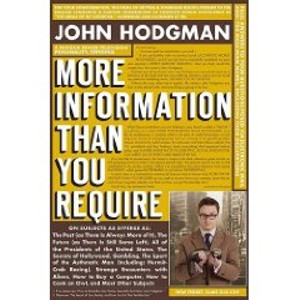 Radio Stars Who Are Fit to Print
In this week's issue, Arts Editor Robert Faires reviews Sarah Vowell's newest book, The Wordy Shipmates. Vowell, of course, first sprung to national attention as a contributor (later "consigliere") to Public Radio International’s This American Life, and she's one of several little-voices-in-our-ear culture commentators who have new books in print. In More Information Than You Require (Dutton Adult, $25), John Hodgman – also a TAL vet (but more famous as the lumpy-looking PC guy) – expands upon The Areas of My Expertise with another wild ride through made-up history, including bogus entries to a page-a-day calendar (as in Oct. 30, 1938, when Orson Welles supposedly followed up his The War of the Worlds panic-inducing broadcast with a radio adaptation of Whitman’s Leaves of Grass – “Listeners fall for it again: Across America, hysterical citizens run through the streets singing the body electric, and falling in love with teenage boys”). Next month, Ricky Gervais podcast superstar Karl Pilkington releases his third volume of simple-man, (semi-)wise-words musings in Karlology: What I’ve Learnt So Far (Dorling Kindersley, $20). And two regulars from NPR’s quiz show Wait Wait Don’t Tell Me hit the stands and hit the town at next month’s Texas Book Festival: Roy Blount Jr., of the baroquely worded Alphabet Juice: The Energies, Gists, and Spirits of Letters, Words, and Combinations Thereof; Their Roots, Bones, Innards, Piths, Pips, and Secret Parts, Tinctures, Tonics, and Essences; With Examples of Their Usage Foul and Savory (Farrar, Straus & Giroux, $25), and Wait Wait host Peter Sagal, who’s just reissued his The Book of Vice: Very Naughty Things (and How to Do Them) (Harvard Paperbacks, $13.95), will hold court on Saturday, Nov. 1, at 3:30pm in the Capitol’s Senate Chambers. Speaking of, check next week's issue for our advance coverage of the Texas Book Festival and the Austin Jewish Book Fair. It's a good time to love books and be in Austin, no?