Ana Sisnett, 1952-2009
A small, sweet gathering was held at La Peña to honor Ana Sisnett, the community activist, writer, poet, friend, and leader who passed away Jan. 13 after a three-year battle with ovarian cancer. An altar bearing photos, flowers, copies of Ana's book, Grannie Jus Come! and sweets had been assembled the night before, and those who attended the event gathered before it to share their memories, poetry, and laughter, and yes, tears. "Oh no," Sisnett's daughter Meredith Sisnett told the assembled. "My mother told us, 'Don't give me one of those sad, sad, everybody crying, funerals!'" Everyone recognized the spirit behind those words, and it was the perfect cue to invite musicians Olivia Prendes and Odaymara Cuesta to perform. The two women, new to Austin, who happened to be from Sisnett's native Panama, were found at a chance meeting earlier in the day. Their spirited, heartfelt singing, accompanied only by conga and rhythm sticks, was the perfect way to send the assembled out into the frigid night, a little warmer than when they arrived. Below are a few remembrances of Ana. Others are invited to share their memories by clicking on the link below. The thread will remain on the Austin Chronicle site indefinitely.

Pulpwood Queen, the TV show?
Kathy Patrick's message at her annual Girlfriend Weekend gathering of the Pulpwood Queen's Book Club is clear: she wants more. More books, more attention for deserving authors and more air time. Specifically, she's urging book fans to contact Good Morning America (the show that put book club on the map back in 2000) and ask them to help spread the word. Oh, and there's always Oprah. Can she pull it off from tiny Jefferson in East Texas where her combo salon/bookstore Beauty and the Book combines kitsch with lit? Don't put it past her. She had a dry run at Girlfriend Weekend with her and Robert Leleux (Memoirs of a Beautiful Boy) serving as the co-hosts, collectively known as BobKat, who sprinkled invited authors (including yours truly flogging his novel-in-stories Evacuation Plan) with insightful questions. Leleux, Joe Nick Patoski (Willie Nelson: An Epic Life) and I proved that even a few guys can hang with the girlfriends. In fact, Leleux proved the true hit of the weekend regaling the crowd with stories of his mother's penchant for wigs and plastic surgery. Mom looked on as proud as could be.

Hanging with the Pulpwood Queens
If you want to be a book-selling monster, you go to Oprah. If you want to hang out with people who love books (and buy lots of them), you go to the Pulpwood Queen's Girlfriend Weekend, which officially gets going on Friday in the tiny East Texas bed-and-breakfast hamlet of Jefferson. As a featured author (my novel Evacuation Plan was excerpted in the Chronicle here), I came early for the Thursday night bash featuring authors and a select few tiara-clad book lovers. We dined on homemade vittles and schmoozed each other. Most of all we reveled in the notion that for a moment we were rock stars. The actual Pulpwood Queen is Kathy Patrick, a former book rep who opened Beauty and the Book, a combo bookstore/beauty parlor, in Jefferson in 2000 and suddenly found herself featured on Good Morning America and even Oprah's Oxygen Network. She's got a not so secret ulterior motive--she likes books and thinks we all should be reading more of them. She has gone so far as to create a program promoting literacy among the area homeless. She's also got a bubbly, infectious personality that makes Girlfriend Weekend, a convention of her--count 'em--209 Pulpwood Queen chapters, a lot different that say the Texas Book Festival. Authors rub shoulders and leopard print with readers and everybody dresses to excess. Hot for House
Lately I've been having a bit of insomnia, so I've taken to watching the HG network's many addictive home buying, selling, and improving shows. This doesn't make a lick of sense -- I'm frustratingly far from being able to escape from rental land, so it's kinda like a chubster choosing to pass the time with his face pressed to the glass outside a Krispy Kreme – but for whatever reason, I'm hooked. My favorite show is House Hunters, in which a rental agent takes a potential home buyer to three different properties and weighs the pros and cons; each show ends with an offer, and then a six-months-later happy ending in which the new homeowner shows off the place. I've gotten pretty good at armchair quarterbacking – marveling at open floor plans and gleaming marble islands, tut-tut'ing at laminate floor and unfinished basements. I'm an even bigger sucker for House Hunters International, having whiled away plenty of hours imagining my own Parisian garret with windowbox planters... Which is why when Ellie Nielsen's Buying a Piece of Paris: A Memoir (St. Martin's Press, $24.95) crossed my desk, I took it home and tore into it immediately. (Finished it the same night, too -- like I said, insomnia.)

Submerge Yourself in Texas Monthly's New Editor
Admittedly, when we pick up a fresh copy of Harper's Magazine, we tend to flip directly to the Harper's Index ("Minimum number of calls the FBI received in fall 2001 from Utah residents claiming to have seen Osama bin Laden: 20"). But Harper's has more deservedly built its reputation on decades of top-notch cultural and political reportage. Want proof? Check out the anthology Submersion Journalism: Reporting in the Radical First Person from Harper's Magazine, about which our own Cindy Widner wrote back in November, "The selections are tightly and sometimes masterfully written, and many of their subjects guarantee fish-in-a-barrel satisfaction (who among us can resist "On the Great Ukranian Bride Hunt"?)." Anthology contributor and newly appointed Texas Monthly editor Jake Silverstein will be at BookPeople on Jan. 20 at 7pm to talk up the book and to deliver "a behind the scenes look at a true reporter’s life." Jake's a hell of a conversationalist, too, so it's sure to be a fun evening.

Harry Ransom Center to Showcase Mamet
The invaluable Harry Ransom Center just released its slate of winter guest lecturers, which kicks off Jan. 25 with a talk by Booker Prize-winner Barry Unsworth, to whom we gave a big thumbs up last week for his latest novel, Land of Marvels.

Karaoke Queen
I'd have gotten this up sooner, but I've been enjoying some limited online connectivity coupled with some sweet quality time in one of my fave cities o'er the holidays: New Orleans. Last week, I reviewed Brian Raftery's most excellent ode to the empty orchestra, the ancient Japanese art of karaoke: Don't Stop Believin': How Karaoke Conquered the World and Changed My Life. B.R. lists some lists in the back of the book, and I couldn't wait to weigh in with my own. 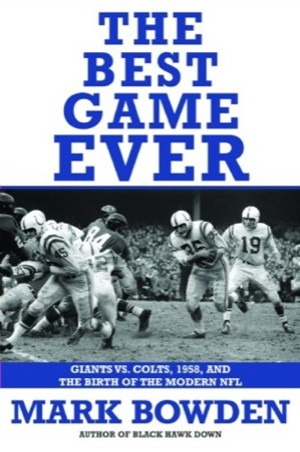 'The Best Game Ever: Giants vs. Colts, 1958, and the Birth of the Modern NFL'
One hundred eighty-six pounds. That was the perfect playing weight for Baltimore Colts wide receiver Raymond Berry. In the two weeks before the December 28, 1958 NFL championship game at Yankee Stadium in the Bronx, Berry weighed 175 pounds. He knew this because he traveled with a scale and weighed himself before each game. Berry had developed a reputation as one of the most dangerous players on the field due to his precision and methodical approach to a rough game. Journalists from Baltimore still tell stories of listening to Berry catch Johnny Unitas passes in the dark after long practices. The concept? Berry wanted to know his routes “blindfolded.” Meticulous precision can also be said of Mark Bowden, author of The Best Game Ever: Giants vs. Colts, 1958, and the Birth of the Modern NFL ($23 Atlantic Monthly Press). Bowden, the celebrated writer of Black Hawk Down, picks up a project initiated by the Pulitzer-Prize winning David Halberstam, who sadly died in a car crash researching this game in 2007. Bowden writes the story of this 1958 National Football League championship game between the Colts and the New York Giants. The game featured the greatest collection of talent on one field, including 17 future Hall of Fame inductees such as the Colts Unitas, Berry, and Gino Marchetti, and the Giants Frank Gifford (yes, the husband of Kathie Lee), the exceptionally callous Sam Huff (the Ray Lewis of this era), and assistant coaches Vince Lombardi (offense) and Tom Landry (defense) whom notably built what we now understand to be the 4-3 defense around the talents of Huff.