All foam, no fortitude in this surfer dude play 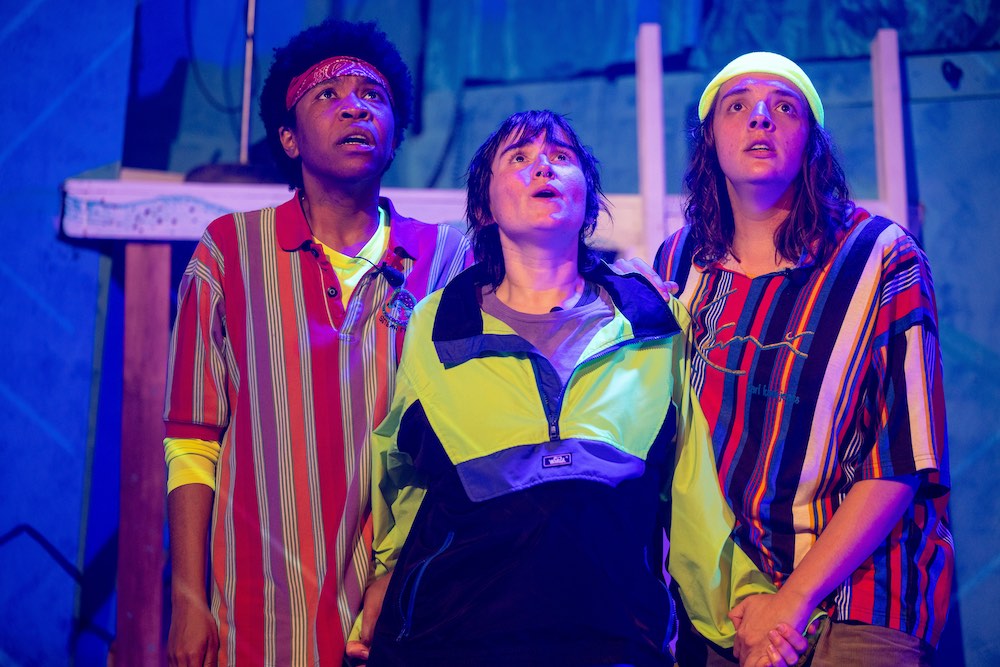 (l-r) Riana Moore as Matt, Aylin Eker as Sketch, and Mattie Barber-Bockelman as Trevor in the Vortex’s Ride the Wave (Photo by Errich Petersen)

There’s a moral just waiting to surface in Mattie Barber-Bockelman’s fun, futuristic surfer story, Ride the Wave, which is getting its world premiere at the Vortex.

Something about getting the most out of life while the getting is good. And there’s an analogy in the works as well. Something like the weird weather and a rogue wave gathering strength far from shore representing the wrath awaiting us as the planet experiences escalating climate change. And surely there’s purpose behind the casting of three women as surfer dudes and lifelong bros, waiting for the perfect ride on the last day of summer. It could be to add to the parodying of surfer culture. Not sure.

But by the time the last “duuude!” is uttered, the final chicken finger is ingested, and the lights fade to black, none of the play’s lofty but underdeveloped intentions gain clarity, leaving attendees frustrated by the clumsy exposition and wishing they had loitered a little longer at the Butterfly Bar next door.

And they seem right at home hanging at the sunlit wood pier and lifeguard tower, beautifully designed by Teresa Cruz (who also directs and successfully drives this production forward), and basking in the psychedelic undertow of said rogue wave. Brandi Alexander’s clever lighting design, Johann Solo’s sound design, and some surreal, luminescent sea creatures created by Lilly Percifield add so much to the staging.

Should you attend, expect to be entertained. Just not enlightened.

The Vortex’s Ride the Wave