In all dimensions, we say – because Felice House’s new works are paintings, and Dana Younger’s new works are sculptures, and together they’re bringing the timeless grandeur of the outside world into the elegant interiors of Davis Gallery on West 12th. 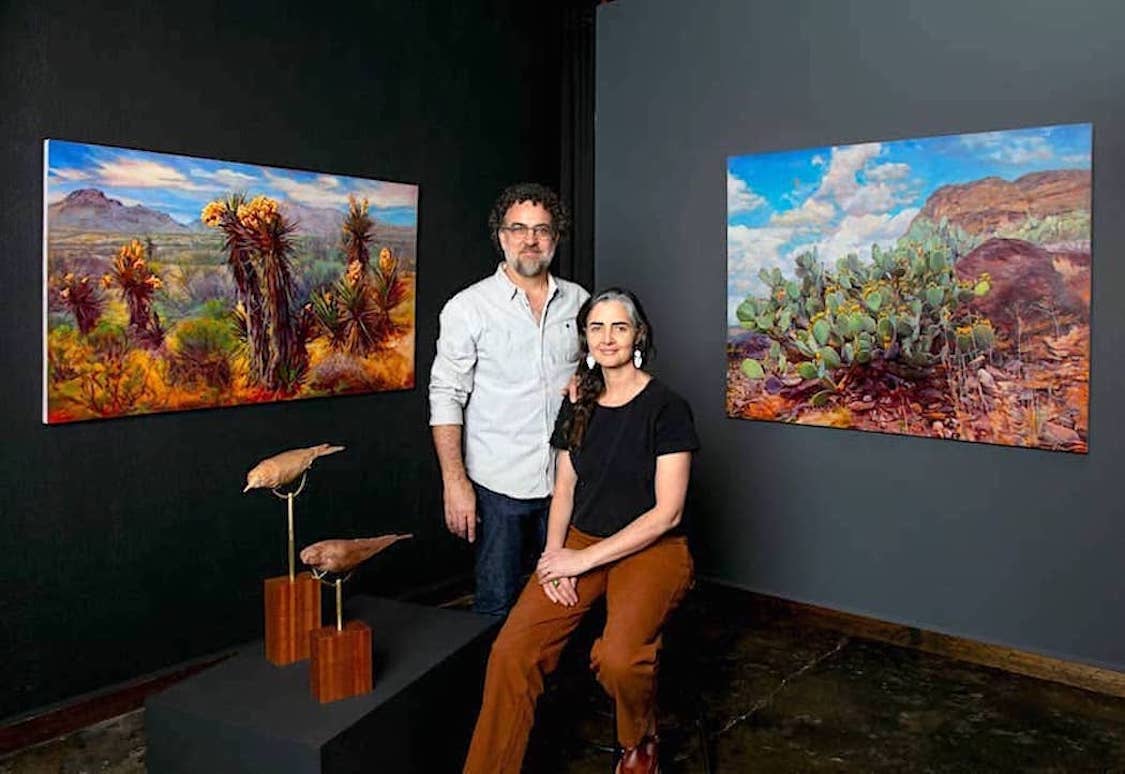 Look at that picture to the right, as provided by the gallery: Two creative humans, in love with each other and in love with the natural environment, posed in front of some of the works they’ve most recently completed, works that are on display for everyone to see, gratis, right there, just – to landmark it for you – a short walk from The Tavern (it’s air-conditioned!) on South Lamar.

So we interviewed House and Younger recently, to provide a bit of personal background for the Chronicle’s art-loving readers' enjoyment before or after viewing this new “Trailheads and Transmutations” show.

Sure, there is an official Artists’ Statement for the exhibition. And that Statement reveals the impetus behind this many-faceted instance of the couple’s industry, telling how the work –

“ … studies, observes, processes, and transmutes the wild spaces and creatures of Texas. Their work follows in the footsteps of painter Thomas Cole, father of the Hudson River School, who believed that the American wilderness was sacred and essential to our nation's identity. Cole said, ‘There is in the human mind an almost inseparable connection between the beautiful and the good, so that if we contemplate the one the other seems present.’ The artwork in this show is about caring. It is about our times, our world, and the Promethean moment humans are experiencing which is demanding new choices in how we engage with each other and the planet.”

– so there’s that, which eloquently serves to define the depths embodied by what will be revealed on the main walls and plinths of the Davis Gallery this weekend.

But we were thinking along more general-interest, more gossip-column lines for this brief post heralding the new show.

Not quite the longer looks we published after interviewing couples Leon & Stella Alesi, Shawn Sides & Graham Reynolds, and Edward Carey & Elizabeth McCracken in the Before Times … but something potentially sweet and domestic and maybe not so deeply entangled with art, art, art.

You know: Like a Hollywood “cute meet” sort of thing, and – scene, right?

Except, who the hell were we trying to kid? This is Felice “Re-Western” House and Dana “Blue Genie” Younger we’re talking with. So of course the whole thing’s deeply entangled with art, art, art …

Austin Chronicle: So, ah, how did the two of y’all meet?

House: I was trying to figure out how to make a living as an artist, so I was relentless about getting my paintings in coffee shops. I had a yearlong tour of Austin coffee shops, where I’d go from Flightpath to Brick Oven and all the others. And I went to Little City – and that’s where Dana saw my work.

Younger: I walked into Little City on Congress, and I saw her paintings, and I was like, “Holy crap, these are like the best paintings I’ve seen in forever.” And this was in 2004. So I emailed her, and I was like, “Hey, I do this show called Blue Genie Art Bazaar, do you wanna be in it?” And she was like, “Well, yeah!” And she came and did the show.

House: And I was the worst. It took me all day to set up, and I was there way ’til the end. I was so slow, I didn't have my frames organized, but I loved it. I brought my dog – I just made myself at home and spent all day setting up. But that was how we met each other. But that wasn’t, ah, I mean –

Younger: That was just how we met. And it was several years later that we, uh, Blue Genie was hosting an East Austin Studio Tour stop at our fabrication space on Springdale.

House: And I was doing a bike tour of the East Austin Studio Tour. And I ran into Dana. And I was like, “Aah!”

Younger: So then we went and did some drawing-from-life-models together.

Younger: With David Ohlerking – in, well, in nutty spaces all over East Austin. For a while we were in a horse barn, trying to draw models.

Younger (grinning): It was a slow train. 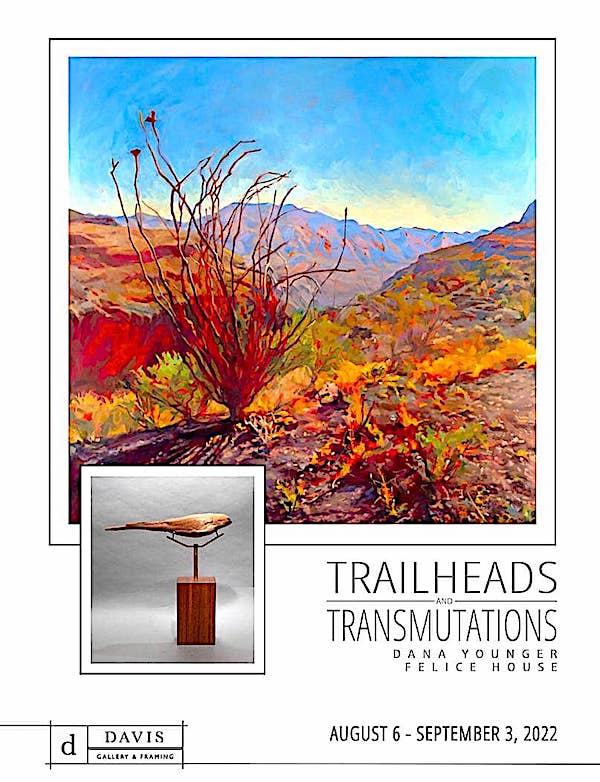 Austin Chronicle: And now here’s this “Trailheads and Transmutations” at Davis – but it’s not your first show together, right?

House: The first show we had together was in 2013. The debut was in Houston and it was called “Re-Western.” It was a reimagining of the Western genre. And I did a series of paintings and Dana did a series of sculptures. We also did a part of that show, like an excerpt of it, later at St. Ed’s.

Younger: But that was the original show we did, in 2013. And we trotted that around Texas, and took it to New Mexico.

House: The paintings ended up going to Leeds in the UK, to the College of Art & Design. It was part of their protest against Trump’s inauguration, and they got a lot of attention on the internet.

Younger: And in 2016 we did “Sum You, Some Me,” at the Dougherty Arts Center. And we trotted that show around, too – to Lone Star College, to Houston, to Michigan. And then we did the show at St. Ed’s. But this is our first major show of new work –