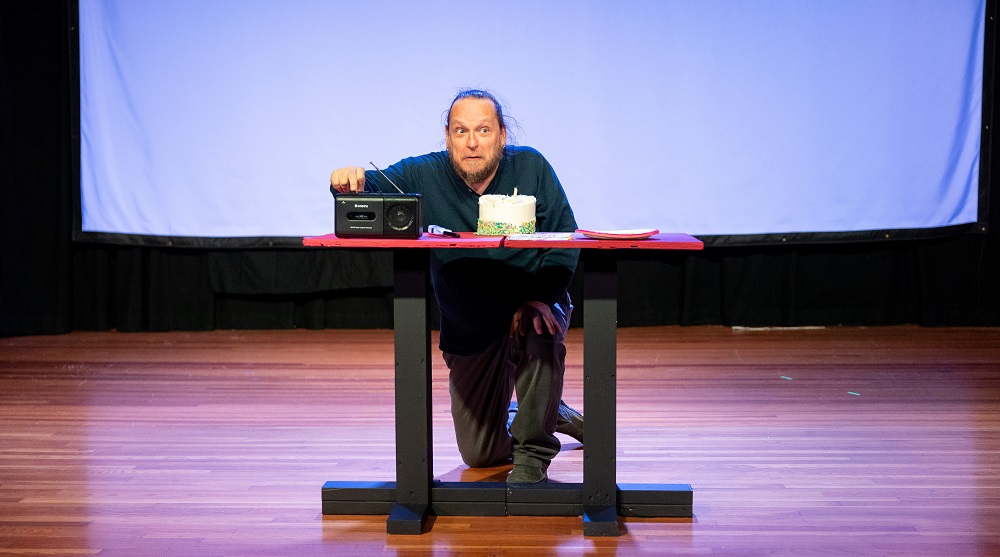 Lowell Bartholomee is an Austin playwright who’s been making people laugh for decades.

He’s also a playwright who’s been making people remember what it’s like – if they ever, for a second, forgot – to feel sorrow and yearning and socially awkward excitement. To experience the confounding spectrum of what it means to be human in a world rife with heartbreak and slapstick and moon landings and iPhones and shows like Saturday Night Live and movies like the Invasion of the Body Snatchers from 1978 where Donald Sutherland’s got that Toni Home Permanent thing going on with his hair.

Hell, we wrote briefly about this talented guy and his main stage-avatar back in the day.

Now here’s 2022 – fuck you, Coronavirus – and Austin Playhouse is producing a curation of those short plays and some new ones. It’s a show called Previews of Departing Attractions, and – running Thu.-Sun., Aug. 5-20 – it inaugurates the Playhouse’s new venue on the Drag.

“I love the idea of a new space to make theater in,” says Bartholomee. “We’ve spent so many years watching theater spaces go away, one by one. Now here’s one that’s getting added.”

Yes, this new place is getting added to the scarce lineup of live theater venues – with a show that Austin Playhouse describes as “a collection of witty, poignant short plays tied together by a theme of loss.”

But fear not: Some of these pieces will (intentionally) make you laugh your ass off even while they amplify your sense of late-stage weltschmerz.

For instance, what’s the, ah, what's the wackiest part of the show?

“That’s probably One Small Step,” says Bartholomee. “That’s the oldest one, the one I wrote 28 years ago. And now it’s gonna be on screen, which I’m excited about. I haven’t done that before. And that one’s flat-out there just to be funny. It has maybe a couple times where it brushes against a relevant point, but it’s not there to make a relevant point: It’s just there to be funny.

“The other funny one is a new piece called Our Little Secret. It’s brand new, and it’s just – you know – I’ve written five pages of fast dialogue, and it’s all kind of bullshit, and I’m just throwing lines out there, wham-wham-wham, and I think it’s gonna work.”

Still, though, the show’s not all fits and giggles. What’s the most sombre piece of the night? 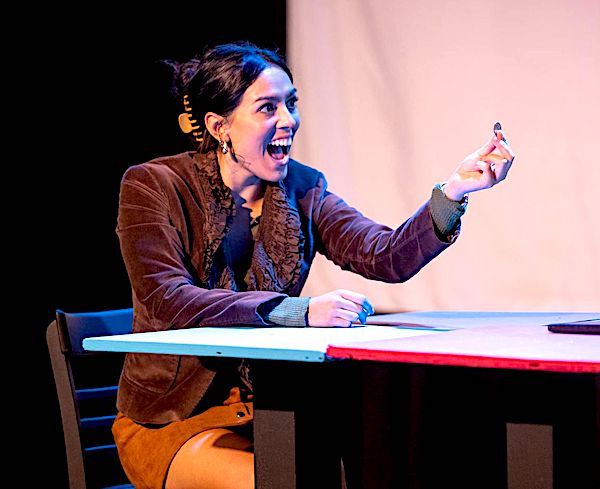 [We’re sitting at the Kerbey Lane Cafe in Mueller, which is totally the most gorgeous iteration of that local diner's entire chain. Mueller’s got L’Oca d’Oro, too, of course – and Rebel Cheese and Casero and Lick Honest Ice Creams and that new Origin Hotel with the excellent Blue Lacy eatery, among all its contemporary wonders. None of which is relevant to this article, particularly … but, hey, sens du lieu.]

“There’s one piece called Mono No Aware,” says Bartholomee. “Which I’m probably pronouncing wrong. It’s a Japanese phrase, meaning the happy sadness you feel about the inevitable temporariness of everything. And there’s two pieces in the show where it’s the whole cast in the one thing. And so we’re rehearsing Mono No Aware for the first time, and, naturally – part of the process – you ask your actors if they have any questions or concerns. And Kareem goes, ‘Yeah – are you okay, buddy? Do you need something?’”

We remember Badr and Bartholomee sharing actorly duties in Vortex Repertory’s powerful production of Heartland in 2019, and we laugh – and look forward to even more delight when this new show opens. But our journalistic snoopiness starts to itch and we also want to know: How did Austin Playhouse choose Previews of Departing Attractions as the first thing for their new space?

“At the start of the pandemic, back in 2020,” says Bartholomee, “Lara [Toner Haddock, Austin Playhouse’s artistic director] was like, ‘We’re looking for things to do, especially since we can’t do it in a theater – maybe we can do it online – would you think about putting together some plays, and maybe we could put some other peoples’ plays with them and do a thing?’ And at that point I was like, ‘Yeah, I don’t know if I can, it’s, ah, it’s kinda taking a lot to wake up and get through the day?’ Because I had a day job, and it was at home, and I was like, ‘Ah, you want new plays? Not old stuff I can just hand to you, and …’

“And then, fortunately, she didn’t push me on it. And things moved along. But, last year, everybody starting to get back into the spaces and stuff like that, Lara said, ‘Hey, we’re still interested in doing that show.’ Which, God bless her, anybody else would’ve said ‘You didn’t really set the world on fire when we asked you last time.’ And I was still interested, so at that point I was like, ‘Yeah, okay,’ because I was, you know, starting to feel it a little bit? And Lara said, ‘Austin Playhouse is going to take over this new space in July, and we’ll do it there," and she showed me pictures of the place. And without thinking about oh, we’re gonna have to set up a whole theater, as well as make a show, I just went, ‘Yeah – sounds great.’”

“So I’m the canary in the coalmine,” he says. “I get to go in first and see what happens.”