Cult classic is a welcome jump to the left, step to the right 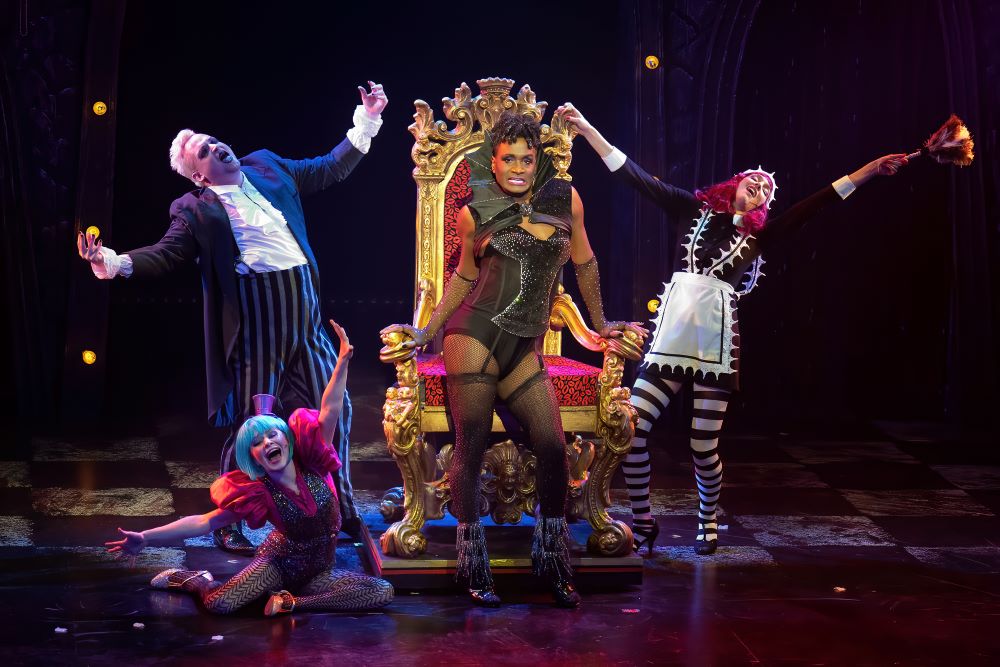 When The Rocky Horror Show opened on Broadway in 1975, Newsweek found the outrageous rock musical by Richard O’Brien "tasteless, plotless, and pointless."

The New York Times suggested that it “is not easy to see why this campy trash was a long-running hit in London and a smash in Los Angeles except that transvestism has always fascinated the British and the L.A. scene is almost as kinky.”

Such mainstream condemnation not only led to the show’s limited time on the New York stage (only 45 performances), but it inspired counterculture audiences to regularly attend midnight showings of the musical’s low-budget film rendition later that year. It also fueled their rebellious inclination to get in on the action. Fans came dressed as favorite characters, armed themselves with homemade props that cleverly corresponded with plot points, and engaged in call-and-response to the corny, sci-fi B-movie dialogue. Included in the repertoire were shouts of “asshole!” at every mention of the bespectacled hero Brad Majors and “slut!” at virgin heroine Janet Weiss, the two sexually repressed innocents who happen upon mad scientist Dr. Frank-N-Furter's lair on the stormy eve of the great unveiling of his perfect boy-toy creation, Rocky. Soon audience participation became a cultish ritual, in a good way, that has persevered for more than four decades.

It takes center stage in the current Zach Theatre production. But with props available for purchase in “party-packs” at the concession stand, the distribution of handouts to guide their usage, and verbal cues worked into the show’s script for those adverse to reading handouts, the fun seems a tad forced this time around. Still, fun of any ilk in a group gathering is most welcome amidst a Stage 2 pandemic, and the creatives behind this production make sure there is plenty of fun to be had.

The Rocky Horror Show was a late addition to Zach’s season, having taken the timeslot originally held by Reunion ’85 when the highly immersive comedy/concert was cancelled in 2021 during the city’s surge of Covid cases. Good move, given the popularity of this cult classic, and of director Dave Steakley and choreographer Robin Lewis’ critically acclaimed collaboration during Zach’s 2006 production of the show.

Rather than tilting toward the dark, ultra-hard-rocking, and deeply maniacal world embraced by so many contemporary productions of The Rocky Horror Show (including the 2000 Broadway revival), Steakley, Lewis, and designers Susan Branch Towne (costume), Serret Jensen (hair and makeup), Austin Brown (lighting), and Cliff Simon (scenic) create a suitably disturbing but not demented place to play, where glitter outweighs goth. Here, the tight threepiece onstage band (bassist Zach Crissman, percussionist Arnie Yanez, and keyboardist/conductor Allen Robertson) serve to support the cast’s spectacular voices rather than vying for dominance. And the show’s choreography, particularly during production numbers like “The Time Warp,” is so delightfully over the top that it succeeds at keeping the musical from taking itself too seriously.

Driving this production, clad in bedazzled high-heeled boots, a leather bustier, and fishnet stockings – and owning it – is the swaggering and playfully seductive Cecil Washington Jr. as Dr. Frank-N-Furter. His triple-threat take on “Sweet Transvestite” early in Act I sets the high standard for everything that comes after it, and his remarkable “I’m Going Home” late in Act II seals the deal.

The rest of this talented cast follows suit and provides the audience with indelible moments that will most certainly be talked about on the drive home. There’s Cameron Mitchell Bell’s (Riff Raff) otherworldly octave jump during the climax of “Over at the Frankenstein Place.” There’s Daisy Wright (Janet) and Jordan Barron’s (Brad) pitch-perfect harmony during the same song and their highly sexualized transformation during “Super Heroes” at the play’s end. There’s Jill Blackwood’s (Magenta) unexpected and spot-on saxophone solos during an otherwise lackluster “Hot Patootie.” Memorable too is every second that the inventive and dynamic Hallie Walker (Columbia) takes the stage. Logan Hart (Rocky), Chris Cornwell (Dr. Scott), and Kaila Burritt and Natalie Claire Freeman (Usherettes) play smaller roles but their contributions are no less significant.

Putting on a mask is no longer required to attend a live theatre production. But putting your hands on your hips, bringing your knees in tight, and doing the pelvic thrust is highly recommended for this one.