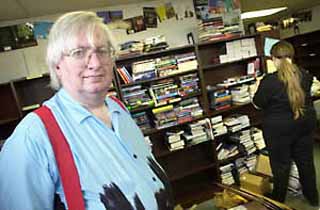 Willie Siros in 2002 (Photo by John Anderson)
Austin's genre fiction community will walk into the future a little slower today, as it has been announced that Willie Siros, bookseller and convention pioneer, died Jan. 5 at the age of 69.

Born in El Paso in 1952, Siros was an early advocate for fan conventions in Texas, starting in 1975 with Solarcon I in his city of birth. However, most of his life and fandom was spent in Austin, including working as a para-librarian at UT Austin's Harry Ransom Humanities Research Center (specializing in speculative fiction) and his decades running genre and mystery specialty bookstore Adventures in Crime & Space - first as a brick-and-mortar facility on Sixth Street, then as an online vendor.

His biggest impact on the SF and fantasy scene was arguably as the cofounder of the Fandom Association of Central Texas, and then in 1979 as a cofounder of Austin's ArmadilloCon, now the nation's second longest-running celebration of speculative fiction. Siros served as chair for the first three years and was a constant presence at the gathering through the decades, even returning as co-chair in 1995 for ArmadilloCon 15. He also worked to bring major traveling international conventions to Austin and Texas, including WorldCon, the North American Science Fiction Convention, and the mystery-centric Bouchercon. He was also a key figure behind InstaCon, the convention for convention organizers.

However, his impact cannot be measured in titles or archived con programs. Siros was famous as a generous advocate for writers and an encyclopedic guide for readers, and that will remain his greatest legacy.