Review: Into the Woods is a Breath of Fresh Air

Zach Theatre's al fresco production is best at its most timeless 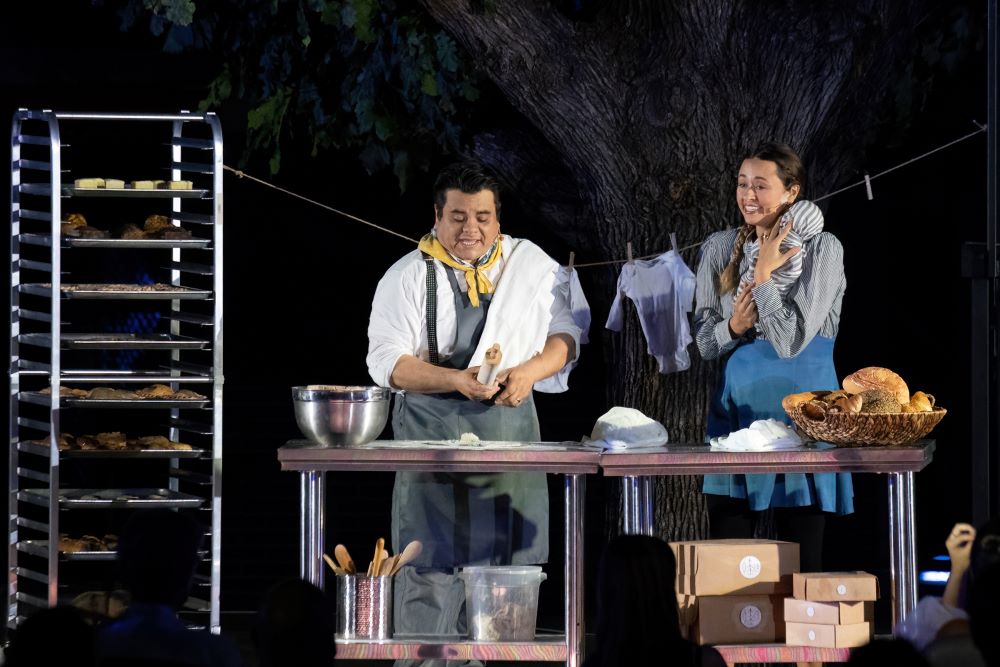 Stephen Sondheim's sly interweaving of the Brothers Grimm's greatest hits may seem like an ensemble piece, but Into the Woods will always circle around the baker and his wife. With Paul Sanchez and Olivia Clari Nice as the protagonists and occasional troublemakers in the new Zach Theatre production, the audience is immediately in safe hands.

That's vital, with the stage tentatively reopening and people worrying about enclosed environments, and wondering how many seats they can move away from strangers. That's where director Dave Steakley has taken the stress out of everything except the story, by re-inventing the al fresco theatrical experience. If the woods can't come to the audience ...

Steakley's Into the Woods is a refreshing response to the necessity for an al fresco production: less promenade than wheelie. Using the People's Plaza in front of the Topfer, the audience is seated on rolling office chairs, and the actors move from stage to stage, environment to environment, and with maximum use of the existing foliage. Theatre in the round in reverse, as it were.

It could be awkward, but the gentle squeak of the gathered crowd spinning politely together gives a communal feel - suitable for a musical about unlikely cohorts. The baker and his wife wants a baby, Little Red (Justine Grace, suitably giddy and precocious) wants baked goods, Jack's mother (June Julian, keeping an overstated character under hilarious control) wants her son (Langston Lee, perfectly addlepated), while Cinderella (Shelby Acosta, excellent as both Cinders and Ella) wants the prince's attention but not the prince. Of course, unintended consequences abound. 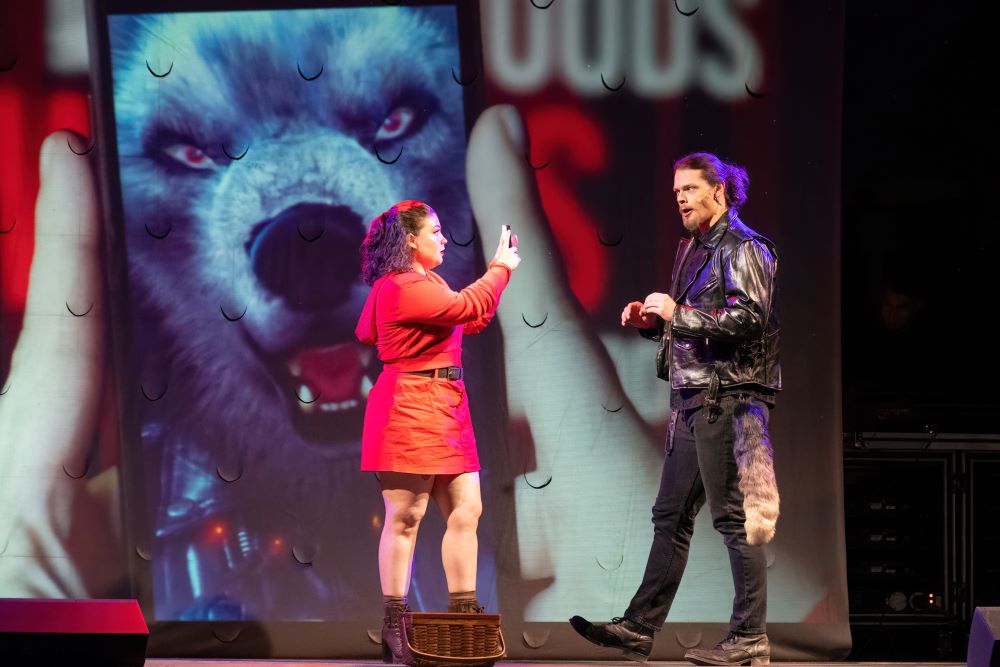 Where the production stumbles is in the urge to make it feel contemporary. When that touch is lightest, like the use of a large screen to show the contents of characters' cell phone screens, it adds new levity. But subtext becomes heavily underlined text in the second act, when the giantess stomping across the countryside becomes an obvious but inelegant metaphor for the pandemic and Black Lives Matter, sending Rapunzel screaming off into madness. Sondheim's work inherently trusts the audience will get that it's fable about unintended consequences, but those moments are too specific, as if the audience can't make those connections. Maybe it's a reflex for directors, as the second act purposefully loses the jaunty sense of direction of the opening hour for a mistier sense of confusion and chaos. It's as if productions can't avoid filling that void. In this case, those modernizations are didactic and misplaced, but fortunately short-lived.

But when the production scales back and takes advantage of the environment and the text, it's a cunning delight. Ingenuity is at play, from the self-rotating seating to the interplay with the woodland, and the hilarious use of a golf cart and a fiberglass cow. There's something delightfully home-hewn about the staging, the ingenuity that comes with experience.

And even with a strong ensemble (not least Nova Payton, who more than fills the robes of the witch with all the grandeur and bubble-bursting the part requires) it's Nice and Sanchez who anchor the emotional heart of Sondheim's cunning fairytale. Nice in particular emerges from the forest, finding all the lust and longing and desperation and restraint in "Moments in the Woods" and making it into one of the show's truly memorable numbers.