Life’s a beach, and then you scry

The sun is rising on a world of good vibrations somewhere, kids, so listen: 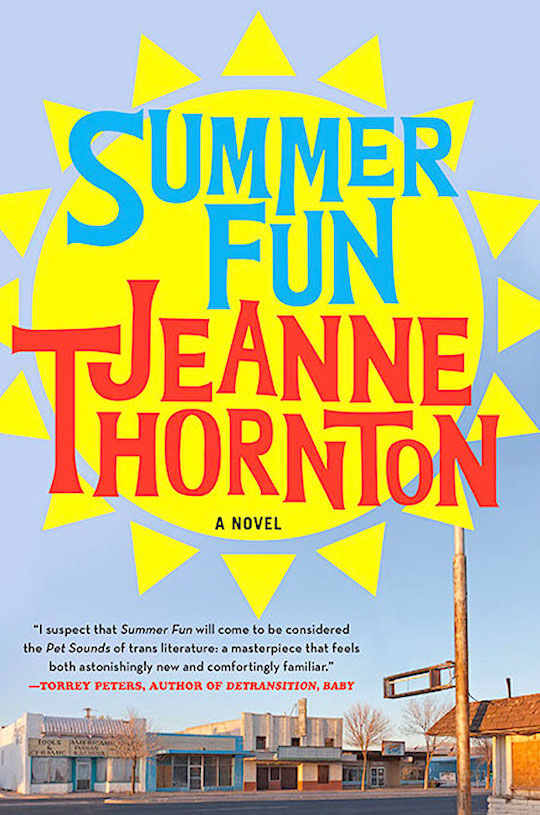 Made my heart come all undone

“Gala, a young transwoman, works at a hostel in Truth or Consequences, New Mexico. She’s obsessed with the Get Happies, the quintessential 1960s California band, led by its resident genius, B—. Gala needs to know: Why did the band stop making music? Why did they never release their rumored album, Summer Fun? And so she writes letters to B—, letters that shed light not only on the Get Happies, but paint an extraordinary portrait of Gala herself. The parallel narratives of B– and Gala form an intricate dialogue about creation: Of music, identity, self, culture, and counterculture.”

That pitch from Soho Press is what first drew me to Jeanne Thornton’s new novel.

It drew me, because the mystery provoked further investigation. And because I like Thornton’s work in general. And because, hey, here she is with a major publishing house now, good for her, let’s see what this is all about …

Cracked the cover, turned the pages, read the book.

Everything implied by the Soho description is revealed with the depths and breadths you’d want from such a story. But that story – especially captivating if you’re even vaguely interested in Brian Wilson and the Beach Boys and how human lives can resemble trainwrecks – that story itself is not the thing that’s the Holy Shit factor. The thing that is, is Thornton’s writing. Which has always been solid. But, in Summer Fun?

Summer Fun, I say, which is available right here?

At times, the narrative voice of Gala is as close as prose can get to poetry without tumbling into brilliant-free-verse-that-everyone-wants-to-have-read-but-no-one-actually-reads.

Thornton’s – Gala’s – words are, after all, merely evocations of reality, right? Just some pythoness of a woman writing about her obsession, yeah? And yet they pull you along like the more thrillery words of a Stephen King might, like that fabulist can at his non-hokey best – but as if the ghost of Shirley Jackson was handling the heavier lifting of emotions and precise, resonant description. And there are, yes, a whole lot of emotions going on in this thing.

The vivid characters and their seeking after what’s likely unattainable … the fraught dynamics of a chart-topping band that’s built from family and fractured by genius … the weird vibe of the American Southwest and its wind-chased stretches of sand … the experience of being transgender in a cis-centric world … the language birthed to capture all of this – and music studios, trailer parks, dive bars, hot tubs, hovercars, the complicated desires that all of us miserable meatpuppets have to contend with in our quotidian lives …

It’s some kind of witchcraft, is what it is.
It’s a parallax whammy of deeply effective conjuring.
This Jeanne Thornton is a … a … she’s a storytelling bruja, I’m thinking.

Summer Fun is a literary feat that makes other writers – your current reporter, anyway – experience repeated moments of “Fuck you, Thornton, why do I even bother putting my fingers anywhere near a keyboard?”

Which is yet another reason it’s highly recommended.