You Have to Be High to See This Mural

There’s a new 30,000-square-foot artwork on a Domain NORTHSIDE roof

We mean, literally high: Not from having recently enjoyed a bowl or two of, like, dank nugs … but by actually inhabiting a certain excessive physical altitude. Because there’s a new 30,000-square-foot artwork on a Domain NORTHSIDE rooftop. 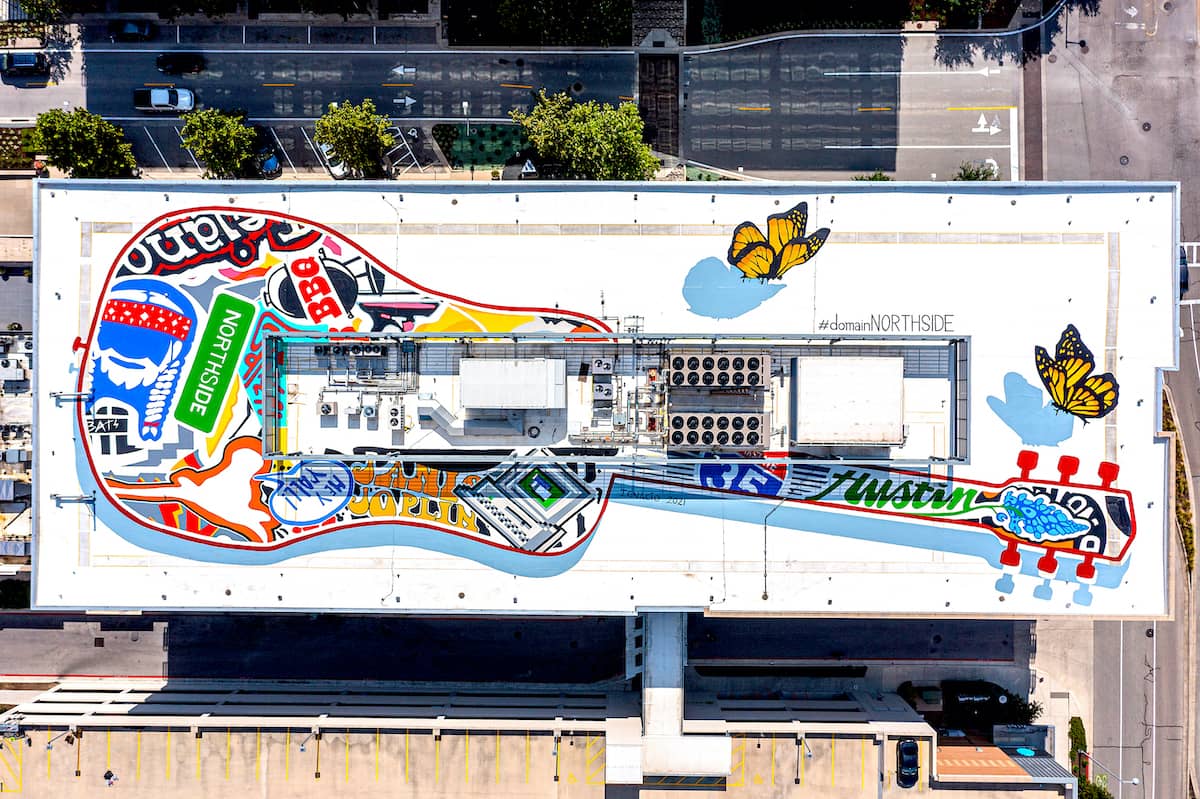 Gigantic images of guitars are where you find them. For instance: On top of Perry's Steakhouse in the Domain NORTHSIDE.

Yes, there’s a new artwork – you can see the picture right here, can’t you? – and it was designed by Tucson native Ignacio Garcia, and it took three weeks to complete, and now it’s ready to be seen by you and your friends IRL … if you can get high enough.

Maybe rent a helicopter or something? Or possible send out some of those drones you’ve been gathering for clandestine surveillance activities?

But know that it’s up there, OK? And know that, within the guitar form, Garcia has incorporated a Willie Nelson portrait, a Texas Longhorn logo, bats, bluebonnets, and a few other elements that “pay homage to what makes this city one of a kind.”

We mean, look at it – it’s a pretty sharp-looking image, isn’t it?

But it reminds us that there are a hell of a lot of murals in these parts – already extant, or currently in the works, or being planned for eventual display – and that we should really be reporting more often on more of them.

Like, why do the murals exist in the first place?

The obvious answer is, Because they look so much better than just another blank wall, yes. But, we mean, why a particular mural in a particular place? And what about the artist or artists who created it – what’s their story? And so on, you know?

In this case, the Domain NORTHSIDE wanted to lively up their property’s visual impact, probably grab some social media traction via snapshots by people flying over the venue (on their way into Austin, or off to some more exotic locale like, ah, Sheboygan). And so they chose to do that with a big, graphic, local-focused celebration.

But, as we say, there are many murals in this town. Whether corporately sponsored or publicly funded or privately enabled, there are a veritable fuckton of streetside masterpieces for slaking our thirsty, thirsty eyes with. And we have a new goal, here at your Austin Chronicle: We’re going to be reporting more frequently on those murals – on the who, what, where, and why of them – in issues to come. Going, as they say, forward.

Because – look around, right? Les Amis closed years ago, baby. Traffic is almost as bad as in Houston. Rent is through the goddamn roof. So many people are homeless and barely surviving in tents. And what’s happened to Waterloo Park is, in the words of one wag, “they paved paradise and put up a walking ramp.”

And it’s high time we paid more attention to what’s on that City’s exterior walls.