UT could learn a lot from these "crazy stories about racism" 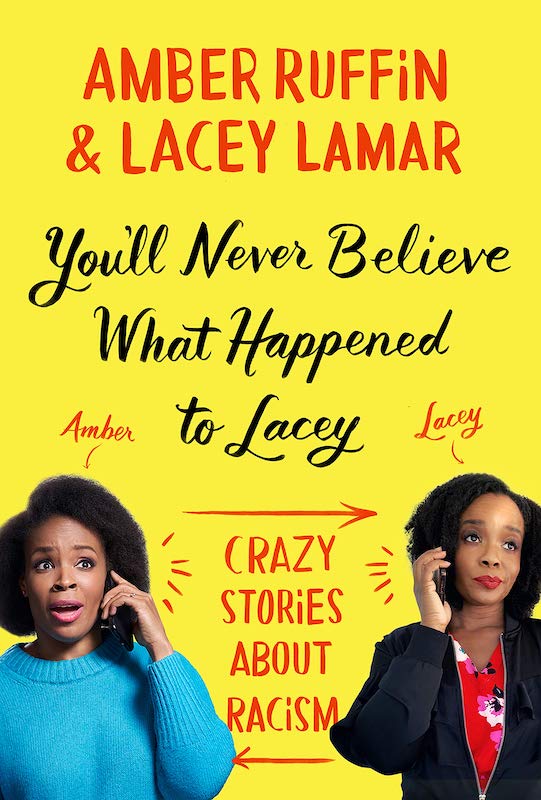 One useful rule of thumb in politics might be: When you’re defending yourself against charges of racism, try not to engage in more of it.

That principle seems to have been lost on quite a few wealthy UT-Austin alumni, who responded to Black student-athlete complaints about the racist history of the school song – “The Eyes of Texas,” composed in 1903 for blackface minstrel performers – by calling the athletes ignorant, credulous tools of imaginary socialists, and inviting “the blacks” to “go to another state where everything is in their favor.” (Said location unspecified.)

I’ve thought often about this deplorable exercise in higher education while reading You’ll Never Believe What Happened to Lacey by sisters Amber Ruffin and Lacey Lamar. Ruffin is a comedian and comedy writer – most prominently on NBC’s Late Night with Seth Meyers. Her sister is a health care/human services professional in their hometown of Omaha. The running gag of the title is derived from phone calls between the sisters, followed by Ruffin’s deadpan recounting to friends of “Crazy Stories About Racism.” It’s undeniably a comedian’s book, essentially light-hearted and satiric. Yet after a while, the accumulation of insulting incidents featuring clueless (or malicious) white people treating Lamar (and occasionally Ruffin) as less than human begins to pall, and finally, outrage.

I’m making this funny, anecdotal book sound like an exhausting rant, and it is not at all a rant – even though the anecdotes I’ve listed above are far from the most mortifying recounted in the book. Constructed somewhat as a dialogue – different fonts for each sister – the tales are delivered almost entirely in a sardonic, world-weary, sisterly eye-rolling style followed by shrugs: Who’s gonna believe that white people can be so crazy?

Black people will, undoubtedly, although they hardly need this book to be persuaded. And the white people most in need of it – from Omaha to Orlando – are never going to pick it up, let alone read it. But if you are somewhere in that middle ground — wondering, could it really be that bad? – you need to read this book.

Indeed, in our current cultural climate, it’s a fairly mild rather than lacerating book on this subject. Ruffin notes that in these particular personal stories, “No one gets hurt. No one dies. Not in this book. This book is not about those things. This book is about the stories you’re expected to swallow and forget. … [And] Lacey is a magnet for this behavior because she’s small and nice and cute. …

That also happens to be true of UT-Austin’s simultaneously outrageous and comical battle over “The Eyes of Texas.” Student athletes, after learning the actual history of an institution where the football team wasn’t integrated until 1969, risked their scholarships and careers in order to point out the painfully obvious context of a bit of sentimental doggerel composed at the height of Jim Crow Texas. The initial institutional response was sympathetic – and then wealthy donors began privately strong-arming administrators, threatening to withhold financial support while denouncing “liberal cancel culture” and suggesting that Black athletes (and Black faculty members) should just go elsewhere.

"UT needs rich donors who love ‘The Eyes of Texas’,” wrote one wealthy and arrogant alum, “more than they need one crop of irresponsible and uninformed students or faculty who won't do what they are paid to do.”

In turn, the administrators got twitchy and now find themselves defending the song as not “overtly” racist and trying to walk a line between an actual university education about the undeniable, complicated history of Texas … and a group of monied white folks who consider educators so many hired hands and student-athletes indentured entertainers who’ve gotten uppity. In the U.S., there are any number of school songs more evocative and inspirational than this juvenile parody of “I’ve Been Working on the Railroad,” and no doubt any number of UT-connected musicians and lyricists who, given the opportunity, could compose a 21st-century anthem worthy of a major university and its traditions. But McCombs Business School graduates have drawn a line in the historical sand, and “The Eyes” shall never blink until Armageddon.

The entire sorry tale would fit comfortably into You’ll Never Believe What Happened to Lacey, and neither Ruffin nor Lamar would be surprised by the current racial follies in full boil at the University of Texas.

”I’d like to say that this is not every experience, and it is not a lifetime’s worth of stories,” writes Ruffin. “And, with that said, isn’t it waaay more than you expected?” Responds Lamar, “What our secret hope is, is that this book has given you the courage to never stop telling these stories.”

It seems only reasonable. After all, the eyes of Texas (and of everywhere else) are upon you. 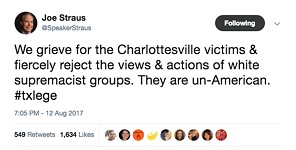 One State Leader Condemns White Supremacy; The Other Does Not.
Who didn’t? You guessed it: Lt. Gov. Dan Patrick. 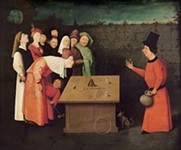