What Is the Livestreamed, Interactive, Cross-Country, Music-Fueled, Comedy of Natatorium?

How far would you go to live The Good Life? Would you rip-off the hardwon possessions – or the ill-gotten booty – of other people? Would you steal yourself a few magnitudes higher than where you’re languishing right now? 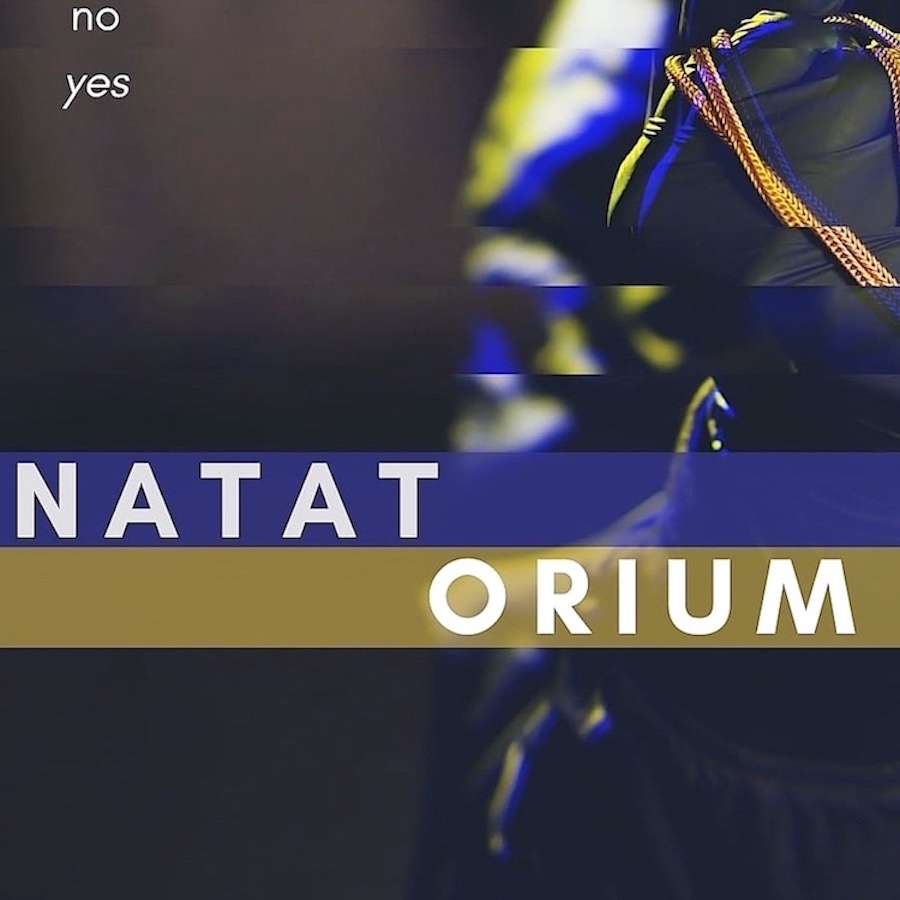 Go ahead, take a splash out of crime.

In the new show – the new livestreamed, interactive, cross-country, music-fueled, comedy show – from American Berserk Theatre and Density512, twentysomething couple Jules and Ash and their gamer neighbors Devon and Chris are trapped in an unending cycle of late rent, mounting debt, and day-old pizza. Across from their shitty apartment complex is Natatorium, a premier gated community full of gleaming mansions, sparkling pools, and possibilities ripe for the taking.

So why not just, you know, take it?

Now you – yes, you, specifically, citizen – can help decide the fate of these would-be thieves as they reach for a shinier life – even if that means taking down a mega-rich corporate asshole or two along the way.

Natatorium is presented by improvised-music conductor Kenzie Slottow and director Kaci Beeler, who are fixing to “push the limits of virtual performance technology to combine a chamber ensemble of six musicians with a 10-person cast of improvising actors." And the cast and crew will perform live from Austin and six other U.S. cities, with each night a unique, unrepeatable experience. [Tickets: Right here.]

You know, it’s been at least two months since we talked with that Beeler – which led to a Rick and Morty box-set review that maybe you’ll agree with? – so of course the relentless creator’s already got this Natatorium thing ready to go, right?

Yeah, no, we were a bit surprised, too. So we looked into it …

Austin Chronicle: The hell, Beeler? Haven't you been busy enough? Even in the midst of a pandemic, you've got to wrangle up something this complex?

Kaci Beeler: You know, there have been times where I wondered what was wrong with me (I, like all humans living through this, often feel dead inside). But, when Kenzie Slottow told me the supercool musicians of Density512 and the virtual tech wizards behind Human Resources: The Musical were interested in making a new interactive virtual show I could not say no. I thought about saying no. I've been working on saying no more in my life (with my therapist's help). But I'm really glad I said yes, because 1) American Berserk Theatre (my now five-year-old theatre company whaaaaaat) has a goal to collaborate with other Austin creative collectives, and 2) we must do all we can to foster and support Austin's art heart in the midst of this vast and moneyed corporate shadow. And what better way to grow the art heart ten times bigger than by joining forces to create what we hope is a very fun live performance experience. It certainly has been fun to make – and that helps make up for the hard work and screen fatigue.

AC: Where'd the concept come from? I mean the apartment complex, specifically. Did the word natatorium spark this whole idea, or did y'all envision the multi-pool-residence and then learn, "Hey, a pool center is called a natatorium.” ... ?

KB: Back in November of 2020, when Kenzie first talked to me about the show, they mentioned they wanted it to be, in part, a virtual experience where improvised chamber music fuels the mood of a scene and vice-versa. And they needed a working title for the show and asked me for some ideas. What kept coming to my mind when I thought about this exchange, this ebb-and-flow, was the fact that in virtual performance we're all working from these little boxes – those Zoom boxes – we've all been in a box by now, right? – and they feel like pools of reality. They are, to me, real and unreal; and you can either float, swim, or drown in this new world of always-connected-disconnectedness and look-at-your-own-face-you-idiot virtual chatting.  So, pools. I began researching pool-related terminology and came upon natatorium – which is a Latin word co-opted by the Works Progress Administration in the 1930s for their pool-centric community centers. I hadn't really heard the word before and it stuck with me, so I added it to a list along with a few other ideas. It turns out Kenzie liked it too, so we decided to go with it. It wasn't until we were partly into the devising process of building the story of the show that I realized “Oh! Natatorium is also the name of the big fancy gated community in the world of our show that houses only the extremely well-off.” I imagined it like Beverly Hills or Cape Cod: Places I don't belong, have never belonged to, but can't help but be curious about. In our mythology for the town it used to be one of those Roosevelt-era community centers, the kind of place where you learn to swim and take your first jump off a high-dive, but was then torn down and paved over by a gated subdivision so exclusive that you have to get a credit check before you can even tour it.

KB: Me? Bitter about mega-millionaires and billionaires during a pandemic that’s destroyed even more of our precious shit-box venues after years of struggling to keep the arts afloat in a town that values another glistening condo mall over a tiny dusty brick-and-mortar theatre that made that part of the city cool in the first fucking place? Nah.

KB: Los Angeles, Chicago, Orlando, Kansas City, Weaverville in North Carolina, and many folx from the ATX! It's all virtual (even the rehearsals), so some of our favorite performers and musicians who’d moved away from Austin could still join in. It's almost like they never left.

AC: And are you performing in the show, too, or "just" directing it?

KB: Hah! I am also performing in it! And I did a lot of the graphic design and all the "scenic design" for the show (I created over 140 unique virtual backgrounds – not even joking). It's really hard for me not to do those two things in addition to production work, because I really love acting – it’s honestly my favorite thing out of all the stuff I do – and I think two steps ahead with design decisions for anything I'm a part of. I just see very loudly in my head an idea for the poster, or the background, or the costume looks. Mention the existence of a design decision and there's an answer right in front of me. Even if it's simple, I just see it so loudly – does that make sense? – it feels like it's screaming. So I'd prefer to make it into reality! Kenzie – they/she, a flutist, conductor, musical director, tech genius, and the other directing half of this project – and I are similar in that way. We can't just do one thing for a show. If we’re capable of taking on another role that we're passionate about, we do it. But this show is so ambitious and has so many moving parts – we're definitely not alone, and thank goodness for that. I can't even tell you about all the mechanics going on behind-the-scenes to create a system where musicians can hear each other and play together and sound good and then play where the actors can clearly hear them and each other and then all those pixels are sewn together so the audience can experience those things simultaneously – and live – from a cast of 10 actors and six musicians with a five-person crew patching everything through behind a metric fuckton of ethernet cables, green screens, ring lights, and prayers.

AC: Whoa. That … that makes my own deadlines seem almost comfortable.

KB: This show could only have been created right now, in 2021, where even after a year of sorrow we were hungry for something more. Where we wanted to take this virtual medium to brand new heights, and where we were still those scrappy band nerds and theatre dorks at heart – finally hanging out together and making something.