One of the best shows to ever grace the impressive gallery at Austin’s much-missed Domy Books was an exhibition of the paraphernalia and heraldic devices of mystically inclined fraternal organizations: “As Above So Below: The Art of the Secret Society.” 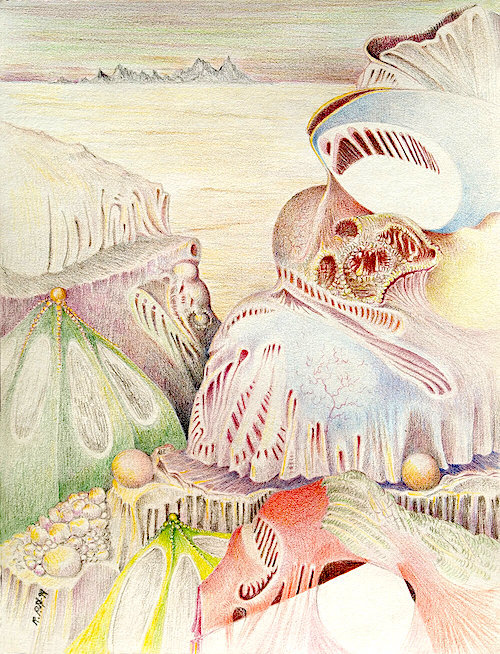 That display of arcane signage from the historical doings of Masons, Oddfellows, Rosicrucians, et al., came about because Domy’s Russell Etchen, always savvy about the aesthetically odd and compelling, had hooked up businesswise with Julie and Bruce Webb of the Webb Gallery in Waxahachie.

The Webb Gallery is located on the ground floor of a downtown building that was completed in 1902. It’s an internationally renowned collection of the sort of esoteric antiques that were on display in “As Above So Below” – and of all kinds of outsider art in general – and the Webbs have been at their collecting and exhibiting for many years – and they’re still going strong.

When we say “going strong,” we mean that the gallery’s latest featured exhibition is an array of artwork by the legendary Powell St. John.

Yes, Powell St. John. The beatnik who moved from Laredo to Austin in 1959. The scholar who graduated from UT with a degree in Art History and Anthropology. The visionary lyricist who gigged with and wrote for Janis Joplin – and wrote six songs for the first two 13th Floor Elevators albums. The harmonica wizard who, in 2005, was inducted into the Texas Music Hall of Fame and, in 2006, was reunited with Roky Erickson in performance at SXSW.

Yes, sadly, Roky’s no longer with us. But, happily, Powell St. John is – he turned 80 last year. And now the Webb Gallery is presenting “Kingdom of Heaven,” a retrospective of the man’s visionary drawings that range from 1966 to 2013, and it’s on display until May 9. It’s the perfect time, we reckon, for a roadtrip. But – what will you see at the gallery, exactly? The accompanying image is one example. And of course you’ll see much of what else the artist has committed to paper, what else has passed before his eyes … even when one of those eyes is his third eye.

In St. John’s own words: “I only draw what I see. Psychedelic drugs have had a major impact on my work, but that is only part of the story. Included in this collection are some works that, frankly speaking, come from somewhere else. These visions are usually wrapped in satire, mystery, and psychedelic terms which I suspect are transmitted to me from some other time and place where my only function is to serve as a conduit for them.”

Our suggestion: Let IH-35 serve as a conduit for you, citizen, and head north to Waxahachie. Play some 13th Floor Elevators on the way and stop by the Webb Gallery to get yourself a headful of the odd and delicate visual wonders that Powell St. John has brought into the world over the decades.

And … yeah, there’s just a bit of other cool stuff on display up there, too. You’ll see.