Because, frankly, most other listicles like this are boring AF

And, no, it’s not too late for buying gifts. Because … well, you’ve heard about New Year’s Gifts, right? It’s the newest sensation, citizen! It’s a response to the pandemically thwarted existence we’ve all been suffering through in 2020! It’s a doubleplus trending activity on the Insta and the Tik and – oh, whatever, okay? It doesn’t really matter.

Ultimately, if you have the money to spend, this eclectic list of Five Really Worthwhile Things You Can Buy For Yourself Or Your Favorite Friends will steer your wallet (and mind and heart) in the right direction any time of the year … 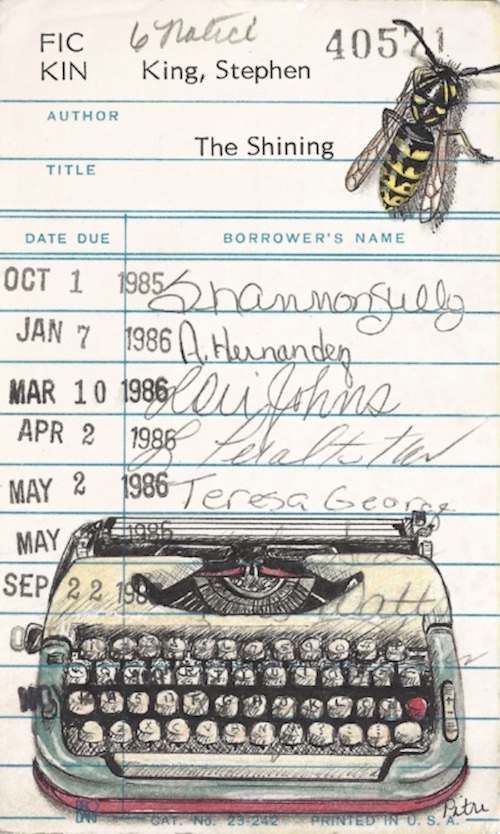 1) HEIDI PITRE LIBRARY CARDS It’s no secret that we’re big fans of Austin-based Heidi Pitre, who’s as much of a fascinating artist as she is an unrepentant Southern-inflected brat of a human being, and among the many things she offers via the SHOP section of her website are sets of her Permanent Record library cards. Pitre’s taken used, decommissioned library cards – you know, like from the old days? – and she’s embellished them with original artwork (pen & ink, colored pencils, watercolors) to complement each book’s narrative. Like, a typewriter and a wasp on a much-used card for Stephen King’s The Shining; a series of cocktails on the card for T.S Eliot’s The Cocktail Party; a portrait of the fierce and feminine sharpshooter on the card for S.H. Holbrook’s Little Annie Oakley and Other Rugged People; and so on. (The Chronicle’s Robert Faires reviewed her exhibition of these works just last year.) And the artist’s had the originals reproduced as individual cards or sets of cards, absolutely gorgeous things, any of which would be perfect for the most creative-minded of your bibliophile friends. (Pitre also sells enormous, giclée-canvas versions of these visual delights – but we’re talking about the cards here, trying to keep your budgetary parameters within easiest reach.) And – what? Her Suffragette pins? Yes, well, we’ve already told you about those, haven’t we? www.heidipitre.com 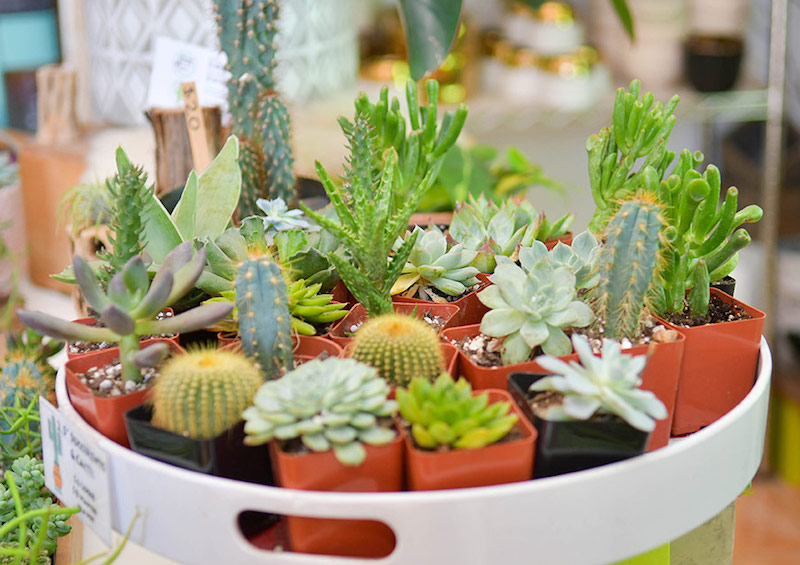 2) SUCCULENT NATIVE It’s not because we were born in what’s becoming, increment by increment, part of The Great Southwestern Desert. No, it’s simply because we appreciate plant life that’s more minimal and spiky, less fluttery and ornate, than most ornamental foliage. Easier to care for, too, which is a big factor even in these more-time-at-home days. (Also, if we see just one more potted Monstera, we’re gonna take a sledgehammer to something.) And there’s nowhere better in Austin than Succulent Native to get such things, we reckon: It’s that lovely little shop on North Lamar (so conveniently close to the main HalfPrice Books store, no less), where you can devise your own plants-and-containers arrangements or choose one of the many stylish (elegant stylish or cute stylish) set-ups that Shannon Donaldson has on display. Okay, so she’s also got a few other non-succulent plants for sale – a few Monstera, even – but we shop at Succulent Native specifically for those plants with parts that are thickened, fleshy, and engorged, usually to retain water in arid climates or soil conditions, and it always makes even our most cactus of a mood so much less prickly. A bit counterintuitive, that. Which is why we’re always glad to recommend a visit here – as if the shop’s a sort of secret emotional palliative and not just a fine retail experience. www.succulentnative.com 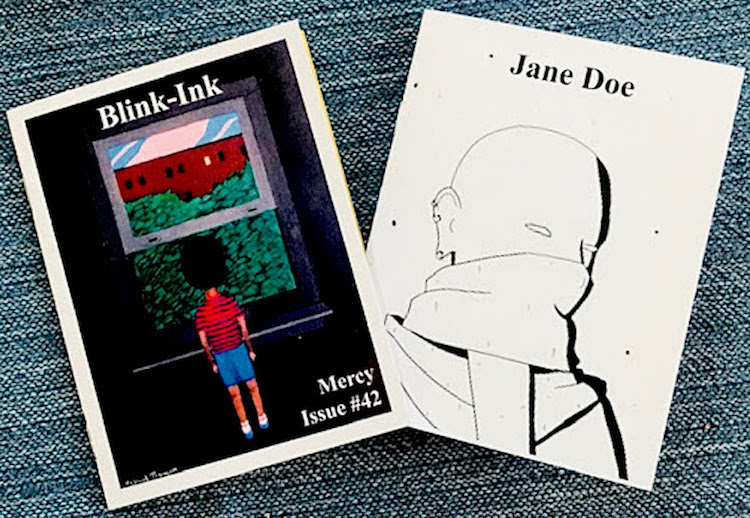 3) BLINK INK If entire books are too much of a commitment at times, reader … if they’re too much like a meal that’ll leave you as stuffed as a haggis at a gathering of the Exalted Brotherhood of Culinary and Sadistic Scotsmen … why not reach for a literary wonderment that’s more like a tiny, well-catered snack tray? Blink Ink is a quarterly print journal run by Doug Mathewson and Sally Reno out of Connecticut, a journal that’s been publishing “the best in stories of approximately 50 words since 2009.” Yes: Just 50 words each. Too long to be any of those Hemingway-famous six-words-challenge sort of things, but also a bit too short to be part of what’s typically gathered as “flash fiction,” these ultrabrief works of narrative are collected in elegant multipaged, saddle-stapled volumes that are perfect for carrying in a pocket or stashing in your car somewhere and reading whenever you’ve got a spare minute or two. Of course, you could also keep them at home and nibble at the minitrove of tasty prose whenever the urge hits, reveling in well-wrought sentences that reflect whatever the quarter’s theme is: Mercy, perhaps, or Magic, or Cities, or Under the Sea, or Home Cooking, and so on. “We publish four issues of Blink Ink annually,” say the editors, “and, at least twice a year, your subscription will include a bonus publication from our sister imprint, The Mambo Academy of Kitty Wang. Sometimes we will send you other goodies and surprises.” Yes, they will. And we’ll vouch that your life will be more delightful than ever. www.blink-ink.org 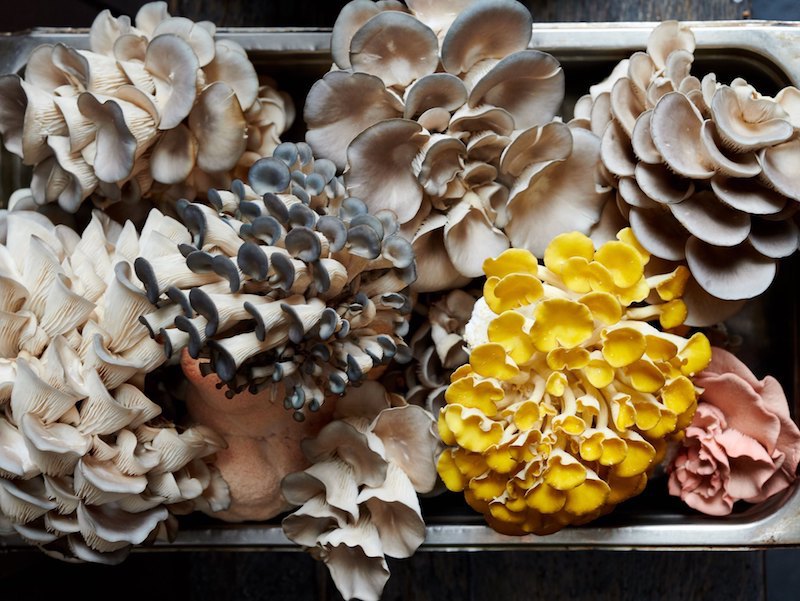 4) SMALLHOLD MUSHROOMS Merricat Blackwood, that darkly twisted delinquent, may well like Amanita phalloides (and Richard Plantagenet), but most of the rest of us prefer our mushrooms non-deadly and nicely edible. Like, extremely edible. And yet, a person could watch Louie Schwartzberg’s Fantastic Fungi movie, or read any number of volumes about mycology by Paul Stamets, or have a subscription to the quarterly Fungi magazine, or even understand the physics behind a displacement-activated spore hub drive … and still not be able to go out into the woods and forage up something that won’t put them six feet under. The failsafe way to make sure that your mushroom is a mushroom you can safely shovel down your gullet (after first sautéeing it in butter or olive oil, maybe adding a little salt & pepper) is to have some expert find a proper eatin’ species and then generate more from the spores of that one. Then you’ll always have only the very best mushrooms, right? And if you’re among the magisterial mushroom-mongers at Smallhold up in Brooklyn, NY, that’s just what you’ll do. But, if you’re Smallhold, you’ll also network across the country (almost like entrepreneurial mycelium) and establish little pop-ups, little sustainable microfarms, everywhere. In Austin, for example. Which is why you can now find Smallhold’s specialty mushrooms – lion’s mane, oyster mushrooms, and royal trumpets – at Central Market, locally sourced. And hurray for that. But this post is supposed to be about gifting, right? And we’re not suggesting that you go out and buy batches of ’shrooms for your loved ones (although that’s not a bad idea at all). No, we’re recommending that you gift them one of Smallhold’s grow-it-yourself mushroom kits. Because that’s 1) much more interesting, 2) experientially fun, and 3) they’ll still get to eat the tasty things after harvesting. www.smallhold.com 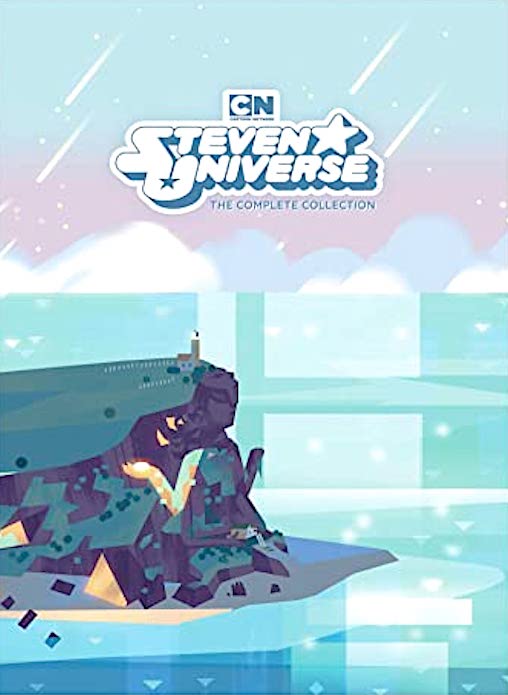 5) STEVEN UNIVERSE: THE COMPLETE COLLECTION We’ve been gearing up for this box set for a loooooong while now. We haven’t even seen a single damn minute of Steven Universe, ourselves, after all this time, tbh … but we hang out on Tumblr where it’s nigh on impossible to miss the raging fandom hullaballoo, and our more interesting friends have always championed the cartoon series to us, and so here we are: Ready to enter into a whole new modern mythos. Of course, we’re enhancing this multifaceted gem (heh) of a collection from Warner Bros. Home Entertainment by first having purchased, from Austin’s own RecSpec Gallery, a copy of Youth In Decline’s Frontier #14 zine that’s focused on – that’s like an annotated sketchbook from – Steven Universe creator Rebecca Sugar. We’re nerdy completist collectors like that, which is why we’re pleased to see the hours of extras included with this official Warner Bros. anthology of every episode of all of the show’s five seasons. Extras? Yes: The animatic version of many episodes, for instance. And music videos. And commentary tracks. And the entire Steven Universe movie. And a doc about the making of that movie. And, you know: even more. And all of it contained in a beautiful package that’s just right, we’re suggesting, for gifting to your favorite _______________. [Fill in the blank, dear reader; we’d never presume.]

gift guide, gift guide 2020, best gift guide in the history of the known universe and also certain parts of the 14th chorp dimension