Take Your Wardrobe Back to Suffragette City

You know it’s been 100 years since women got the right to vote for the elected officials of this country, right? 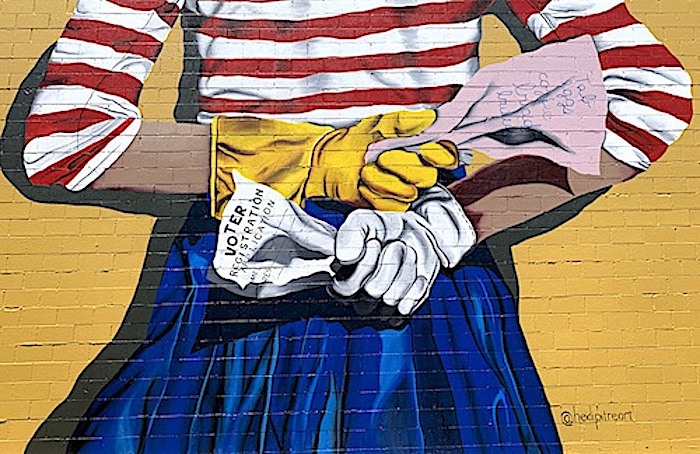 This mural is huge, but the pins are just the right amount of small.

That’s not why this year’s elections are more important than many elections – oh, don’t get us started on what’s at stake here – but we’re still celebrating the fact that female suffrage, as it’s called, is still a thing. And it’s now a centenary thing, and so Austin-based Heidi Pitre is also celebrating, and her homage to the Suffragettes is exactly what you’ll want to punctuate your wardrobe with.

[Note: You, too, brother: You think equal rights are something only the disenfranchised must struggle for, whether it concerns something other than voting or other than gender-based biases, you’re part of the problem. Sure, you might prefer not to have a stunning enamel pin on your lapel, but your ass had better be out there marching and petitioning and so on.]

We told you about Pitre’s creepy Southern-inflected figurative paintings a while ago, when she had a show at the Butridge Gallery in those Covid-free Before Times, of course. We told you about her evocative series of repurposed and illustrated library cards, too. But we didn't tell you about the building-size mural she later created, based on her Voter Registration painting – because that mural’s in the middle of Hattiesburg, Mississippi, and we can’t cover everything everywhere, n’est-ce pas?

And now we're telling you about these Suffragette pins and prints. Because they’re timely af, and they look so good, and, listen –

“Women’s right to vote in 2020 is monumental because it marks 100 years of women’s suffrage under the 19th Amendment, and 55 years under the Voting Rights Act of 1965,” says Pitre. “However, the women who fought for these freedoms continued to face obstacles to exercising those rights because they had limited access to forums, transportation, and other support. The Suffragette series celebrates the 1960s women who took charge and reclaimed the spaces available to them. They set up voter registration tables at grocery stores and department stores – places men didn’t frequent. With a grocery list in one hand and a voter registration application in the other, these determined women created forums for women to support and empower each other as political citizens.”

Yeah, that’s got our vote.