The North Door, one of the largest and most versatile venues on Austin’s Eastside, now fades into memory – another casualty of COVID-19.

Like most live event spaces, the multi-level club at 502 Brushy shut down in March and hasn’t reopened. Owners now confirm the decision to close the location permanently.

The 300-capacity room opened in 2009, first as the Independent, then as the ND, and lastly and most extensively as the North Door. With a rounded stage and a projection wall, plus a floor plan that accommodated general admission or seats, the venue functioned as a setting for punk shows, storytelling events, experimental jazz festivals, touring comedians, hip-hop showcases, classical music recitals, podcast tapings, and electronic music nights – like that of Latin DJ crew Peligrosa, which had an enduring presence there.

As such, the North Door existed primarily as a performance space rather than a neighborhood watering hole. However, 2020 saw the flourishing of the massive Plaza Saltillo development next door, which would’ve presented loads of foot traffic had public gatherings not been thwarted by the pandemic.

A press release announcing the closure ended on a positive note:

"We’ll be back at some point in the future under a new name and we will make sure to reach out to you. Until then, take care of each other." 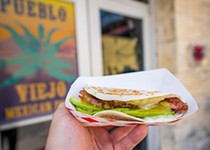