Five Recent Graphic Novels You Shouldn’t Miss Out On

Book yourself some quality reading time AFK, why don’tcha?

Okay, not necessarily graphic novels, all of them – the first one’s more like an illustrated short story, in fact, and there’s a collection of stories, and another collection of – look, graphic novel is just the more familiar industry term that we’re going with here. 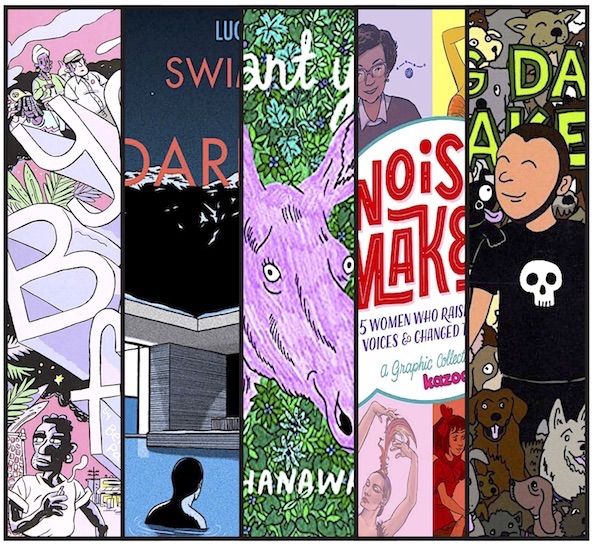 And if any of these titles are new to you, we’re so glad to spread the word about them, because it’s been a while since these damned ’ronas settled in and distracted us from our championing of sequential art, and these are just five of what’s worth sounding a Chronicle huzzah about … 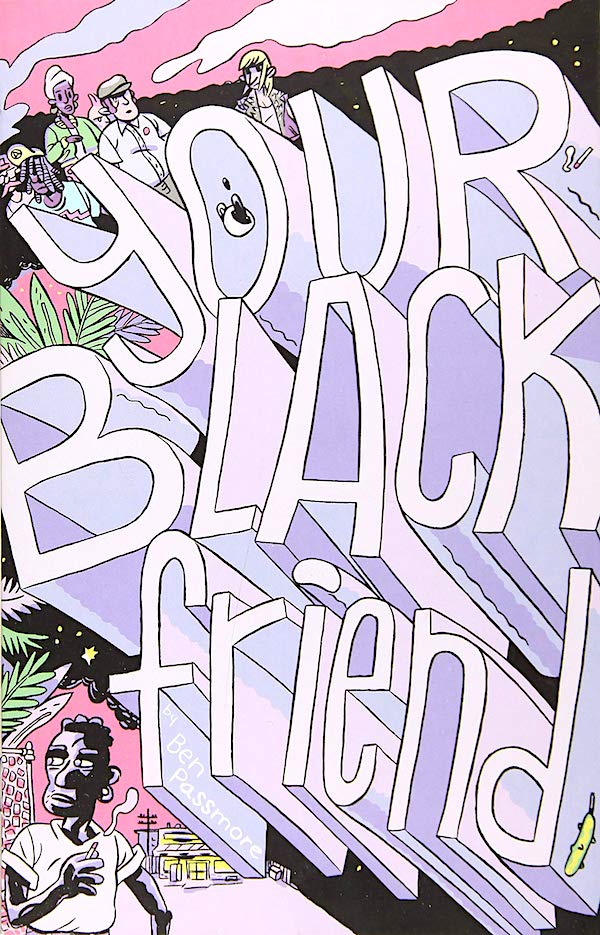 You know anybody who’s white that doesn’t need to read this digest-sized, full-color comic from San Francisco graphics house Silver Sprocket, that person must already be dead – because nobody learns anything in the grave. For the rest of us Caucasians still stumbling aboveground, and for anybody with any level of melanin to their skin, really, here’s a handy guide to what “your Black friend” – a pleasure to meet you, Mr. Passmore – is thinking about, contending against, compromising to, and just generally dealing with as he goes about his slackerly cartoonist life and interacts with people paler (or, sometimes, darker) than he happens to be. Timely? When is information like this not timely? But you can’t beat comics, especially Ben Passmore’s comics, when it comes to just-another-citizen engagement and relatability. 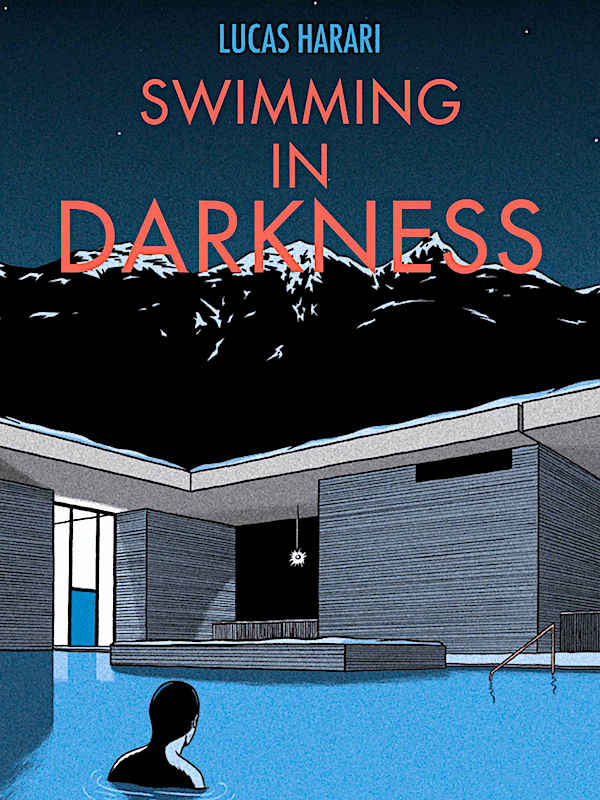 This debut by French artist Harari is more solidly in the novel-length category as comic-book tales go, and “solidly” can be taken literally, too, as the oversized hardcover volume from Arsenal Pulp Press could double as one of the most elegant book-shaped murder weapons ever, such is its impressive construction. The contents – the story and the art, yeah – are even more impressive and will especially delight readers who enjoy being a bit creeped out. You don’t have to imagine that there’s a famous architect named Peter Zumthor who designs a weird system of public baths over natural thermal springs in a mountain village in Switzerland – because there is such a man, and he did design those still-extant baths. But imagine this: That a young, oh, let’s say David Lynch, more into architecture and graphic novels than film, wanted to celebrate Zumthor’s enigmatic structure; imagine the sort of surreal and danger-ridden story that auteur might come up with by way of a darkling tribute. Because that’s what Lucas Harari, himself the son of two Parisian architects, has done here – constructed a compelling mystery and obsessed characters and some reality-warping narrative infrastructure gorgeously limned and reproduced via a subdued, heavy-on-the-blues palette of colors. 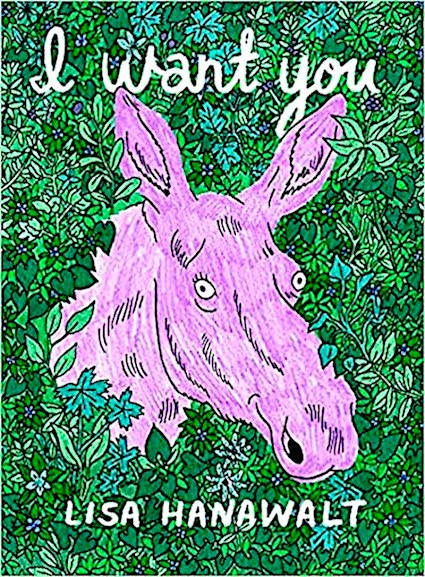 I Want You
by Lisa Hanawalt
Drawn & Quarterly, 140pp, $21.95
www.drawnandquarterly.com

By now, with her designs for the animated BoJack Horseman and Tuca & Bertie – not to mention mere paper-based brilliances like her bestselling Coyote Doggirl and Hot Dog Taste Test and so on – by now Lisa Hanawalt’s works are sufficiently well-known as to require little more than a shout of “Look! New Hanawalt!” to alert the interested masses and help Canada’s Drawn & Quarterly powerhouse of comics move however many hundreds of units per diem, right? But this blurb exists to say “Look! Old Hanawalt!” Because the latest D&Q release is a rich collection of work from the artist’s minicomic days. It’s no surprise, either, that Hanawalt’s 1) drawing skills and 2) juicily twisted sense of humor and 3) delight in anthropomorphic animal sex and relationships are in full evidence here and are just the whack-upside-the-head-with-a-lubed-dildo that modern culture needs. You know what she is, this Hanawalt, it seems to me? After reading the I Want You paperback and revisiting her more recent material? In many ways, she’s the next, better evolutionary step after B. Kliban; YMMV, but that’s about as near perihelion a compliment I can give. 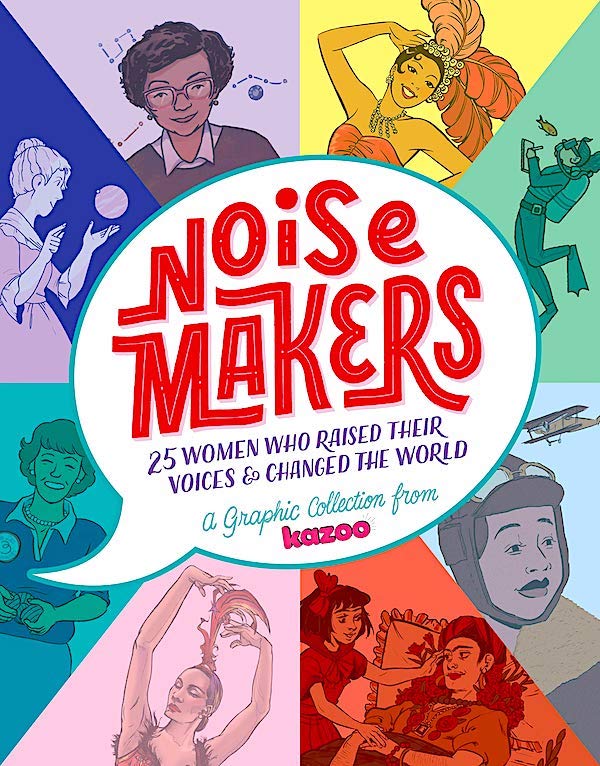 Noisemakers: 25 Women Who Raised
Their Voices and Changed the World
Knopf, 224pp, $25.99
www.penguinrandomhouse.com

From Kazoo – the quarterly print magazine for girls, ages 5 -12 – comes this anthology of biographical comics about historically fierce women by graphically fierce women, and never mind the publication’s age and gender designation: This hardcover compilation is a bright resource (of information, of inspiration) and enriching entertainment for any human at any stage in their lives. Editor Erin Bried has gathered brief, fact-based evocations of greatness from such excellent cartoonists as Emily Flake, Sophie Goldstein, Ashley Woods, Kat Leyh, and more; and Knopf’s released it in a hardcover, full-color edition that’ll make your favorite coffeetable grin with pride; and surely all we need to do is point out that, among the many treasures here, there’s eight pages of Emil “My Favorite Thing Is Monsters” Ferris paying polychrome crosshatched homage to Mary Shelley, and you’ll be like TAKE MY MONEY NOW. 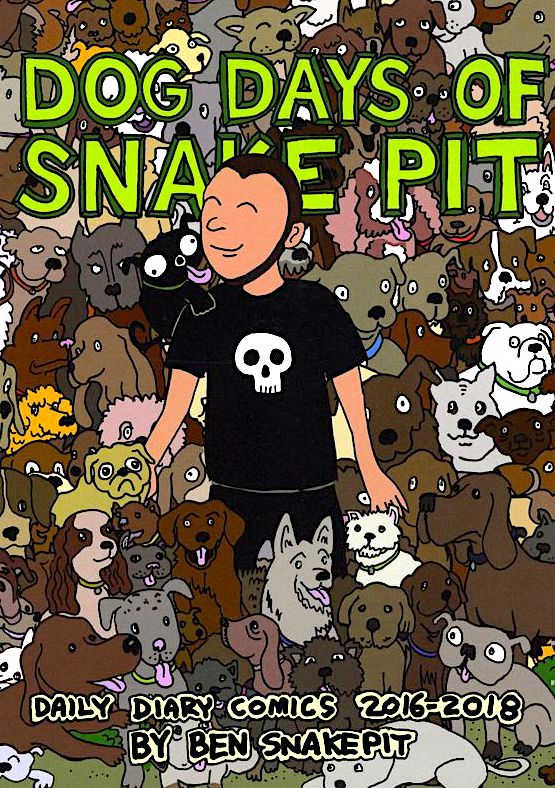 And we end this series of five where we began – with Silver Sprocket, that is – and the scrappy publisher’s release of Dog Days of Snakepit. You remember Ben Snakepit, of course, and have been aware of his stuff for years – even though the former Austinite exited the Lone Star State a good while before this pandemic came to fuck us over. Snakepit is the man who’s been recording his life in one daily black-and-white comic strip after another, day after day, strip after strip, no pencils, just straight pen-to-paper, to great cumulative effect, since January of 2001. His last book before the move was Manor Threat, collecting the strips from 2013 to 2015, and this new one brings us from 2016 to 2018 and is again filled with the sort of wacky and touching quotidian adventures that a former (no: forever) punk musician and maturing family man gets into while living, loving, and battling the various vicissitudes of existence. (We’d also pimp Snakepit’s big, Austin-celebrating jigsaw puzzle, based on his poster called A Night at Beerland, but that righteous thing’s already sold out and you’d probably hate us for reminding you. [Note: Oops.] But, go ahead – after buying a couple of his books, send that Ben a message clambering for a new edition. Because the storied Beerland venue doesn’t have to be gone for good if it’s being reassembled from the jagged little pieces scattered on your kitchen table, right?)