The plane flew low over the desert mountains, so close to the large tents pitched outside El Paso’s Border Patrol Station 1 that Maribel thought her prayers had been answered. She’d been crying inside her tent, asking God to deliver her from the makeshift detention camp, when she heard the plane’s roar.

She and other detained migrants – from Guatemala, Cuba, Honduras, El Salvador, and other countries – ran outside. “I felt such great joy,” she says, remembering that May evening in 2019. “I thought they were going to get us out of that horrible place.” They began to yell. “Please help us, we want to be with our families! They have us here unjustly!”

The women’s cries woke Jocelyn. She left her own tent in time to see the plane disappear beyond the mountains and Border Patrol agents hurry toward them, alarmed. Guards rushed them back inside the tents and quickly covered them with camouflage tarps. “So no one could see us,” Maribel says. “Nosotras te Vemos" by Zackary Drucker. In Plain Sight, conceived by Cassils and rafa esparza, is a coalition of 80 artists fighting migrant detention and the culture of incarceration. The performance occurred in July 2020. IPS AR artworks are accessible via artist Nancy Baker Cahill’s 4th Wall app. (Courtesy of In Plain Sight)

This July 3rd, 4th, and 5th, planes will fly above detention centers, immigration courts, and international bridges throughout the United States, scripting messages in water vapor across the sky. Their words of protest and support for those in this country who are not yet free, chosen by some 80 multidisciplinary artists, are part of In Plain Sight, an art project that aims, its press release states, “to make visible what is too often unseen and unspoken on the ground: the appalling, profoundly immoral imprisonment of immigrants.”

In Weslaco, Texas, a plane will skytype “Unseen Mothers” above the Border Patrol station where a 16-year-old boy died of the flu in a concrete cell last May. “Nosotras te vemos,” another will say, over the South Texas Immigration and Customs Enforcement (ICE) Processing Center in Pearsall. “We see you.”

Zackary Drucker, the photographer and TV producer who chose “Nosotras te vemos” for her message, translated them from a comment made by Loretta Lynch, the Obama-era U.S. Attorney General who sued to stop North Carolina’s restrictions on transgender people’s use of bathrooms. At the end of her press conference announcing the suit, Lynch had added: “Let me also speak to the transgender community itself. We see you.”

Drucker imagines migrants detained in the Pearsall facility’s transgender unit might look up to see that message and feel much as she did, as a transgender woman, on hearing Lynch’s words. “I hope they feel that their existence matters, that their lives are important, that they’re seen – that they’re not forgotten.”

This is one of the many goals of IPS, which, along with nationwide skytyping, will involve a social media campaign, a film documenting the project, and on-the-ground protests led by local advocacy groups. The artists’ short phrases – no more than 15 characters to ensure viewers can read the full message – are meant for many different audiences, says Drucker, and are "part of what makes this project such a strong statement.” 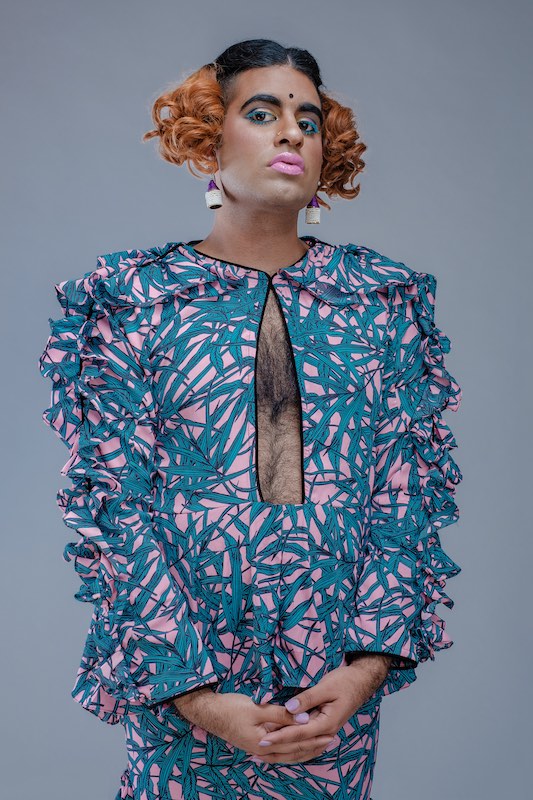 Poet and gender nonconforming fashion designer Alok Vaid-Menon intends their message, “God Brown America,” as a celebration of immigrants and a public reminder, they say, that “America is not just whiteness.” Also the title of one of Vaid-Menon’s poems, “God Brown America” is a sly twist on the twangy Southern idiom, “Well, God bless you.” No, Vaid-Menon says: “God brown you.”

The grandchild of a refugee who fled what is now Pakistan for India before migrating to the U.S., Vaid-Menon grew up a “small, queer, brown, trans Texan” in College Station at the height of the post-9/11 backlash against Muslim Americans. Of Hindu heritage, Vaid-Menon endured multiple forms of discrimination, from longtime friends who asked, “Why did your people do this to us?” to family members who would not accept their identity. Now living in New York, Vaid-Menon flew back to College Station amid the pandemic in order to see those words hovering over the Montgomery County Processing Center, just an hour from their hometown.

Carolina Caycedo’s message, “#No Wall #No Muro,” will stretch above the Ysleta Port of Entry connecting El Paso to Juárez, its Mexican sister city. Visible for 20 miles, her words will just barely reach the Border Patrol station that once held Jocelyn and Maribel, who I met while conducting human rights investigations with a legal advocacy group. Both young women, whose names have been changed, spent more than 40 days in the desert tent camp before immigration authorities returned them to Juárez under the Migration Protection Protocols (MPP). This 2019 federal program requires asylum-seekers to wait for their U.S. immigration court hearings from Mexican border towns, where they are often targets of rape, kidnappings, and assaults. Caycedo, an immigrant who has seen family members both deported from the United States and imprisoned within it, wants her words to speak to those on both sides of the Rio Grande, highlighting the impact of border walls on border communities, biospheres, and indigenous peoples whose ancestral homelands have been sliced in two. “The river was never meant to be a border,” she says.

Activists plan to join IPS from the ground. Protests will take place in El Paso and Juárez. On July 4, cars bearing bullhorns and window paint will caravan to the Karnes Family Detention Center in San Antonio, where ICE’s practice of separating migrant families may soon resume following a recent court decision that allows migrant children to leave detention but does not mandate release for their parents. In addition, IPS will plant trees bearing 40 types of stone fruit near detention centers and other sites of incarceration – an act to offset the carbon footprint left by the planes’ fuel-intensive flights.

The artists, meanwhile, have their minds in the clouds. “The sky stretches and yawns over all these arbitrary designations we make between states and countries and territories,” Vaid-Menon says. Drucker thinks of the sky as a “tool of democracy. There’s no legislation that can prevent this message of love and visibility from reaching the folks at the South Texas ICE Processing Center. There’s no politician that can obstruct that message.”

With the onset of the coronavirus, the sky took on an increased resonance for Vaid-Menon – becoming another reminder that we all breathe the same air. IPS gained urgency as COVID-19 infiltrated jails, prisons, and the nation’s public-private network of roughly 200 detention centers, where one of every four detained migrants tested for the virus has tested positive and at least two have died from it.

The projects’ founders have kept this massive artistic and weather-dependent undertaking largely secret, born of a desire to surprise and inspire their audience, of course, but also to protect those who might be watching from confinement. Caycedo points to recent instances in which migrants have allegedly been punished with solitary confinement or pepper sprayed for protesting poor safety measures in light of COVID-19.

That’s what happened to Jocelyn’s tent cohort the day after the plane’s flight: “They punished us for screaming,” Jocelyn says. The camp’s guards woke them early that morning, when the desert air was still cold, and made them stand outside in a line for hours.

Punishment or no, both she and Maribel are buoyed at the thought of the skywide demonstration. Since their forced return to Juárez last June, their paths have split. A year ago today, Jocelyn walked to the center of the Santa Fe bridge that connects Juárez to El Paso. Flanked by protesters, press, and U.S. Sen. Cory Booker, she asked U.S. Customs and Border Protection to let her seek asylum from within the United States; as a young LGBTQ woman fleeing persecution in Honduras, she was a particular target for violence in Mexico, her attorney said. It worked. Immigration authorities took Jocelyn to a new detention center, and after several months, released her into the United States. She now lives freely with her partner. If she could write a message in the sky, she says, she would tell other detained migrants that “todo pasará.” All things will pass. Maribel has not had such luck. She waits from Juárez for her final asylum hearing in September, though with a border-wide lockdown amid COVID-19, she wonders if that day will ever come. A month into her forced return to Juárez, she witnessed a murder in broad daylight and gave a witness statement to police, an act she deeply regrets. Since then, vans drive slowly past her home by day, while her doorbell rings at night, with no one there when she comes to the door. Even local authorities have told her she’s not safe in a city where organized crime and police can be one in the same. Despite these apparent threats, U.S. immigration officials denied her request to seek asylum from within the United States.

She reads the artists’ messages by text, and seems especially taken by one: “No te rindas.” Don’t give up. “I will never give up,” she writes back. “This weekend, she will go to the foot of the Las Americas international bridge in Juárez, where she will watch another plane, this one with a message arching across the border. “It’s important to me,” she says of the project. “I don’t want anyone to go through what I’ve gone through.” Depending on wind conditions, the phrase will likely fade from the sky in just 10 minutes. For Maribel, the words will last. 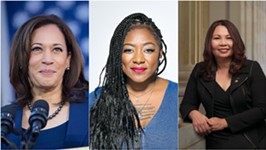