This Is Who We Are #12: Tapestry Dance Company's Rhythm … of a Life 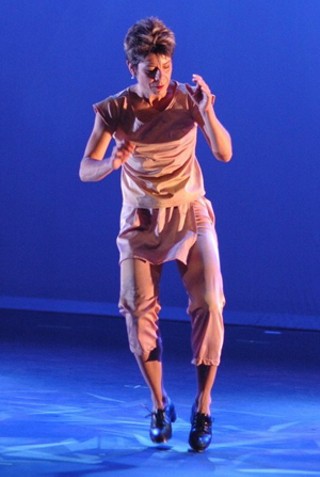 The dancing was, without question, intense. Two men face to face, moving in concert, but as if in combat, Morgan Hulen surging forward, legs pumping determinedly, as Jason Janas edged backward, giving ground, but with his legs churning and feet hammering the stage in frenzied protest. At another point, Tasha Lawson literally trapped in the spotlight, rapidly propelling legs and arms against the edges of illumination cast on the stage but, no matter what she did, being unable to break into the darkness beyond. At yet another point, Molly MacGregor, arms whirling, body rolling through somersaults, elatedly inscribing invisible circles in space. Throughout this Tapestry Dance Company production, dancers moved with palpable purpose and urgency.

But as intense as the dancing was the watching. In piece after piece, Acia Gray shared the stage with the dancers but usually at a remove, her gaze focused on them, their movements, on the intent behind the movements. You could read the concentration in her face from deep in the Paramount house; she was studying these figures, scrutinizing them, as if to divine some secret, some knowledge that might teach her how to live or even save her life.

Indeed, that was the point of this production; after a health crisis for which the Tapestry artistic director was hospitalized, forcing her to curtail her nonstop lifestyle and examine what it was doing to her, Gray conceived of a series of numbers in which dancers would personify qualities relating to one's character or lifestyle – conscience, breath, being driven, letting go – and she would embody a burdened life that would learn from their dances truths through which it might free itself. Gray was there to portray a journey of discovery that might be relevant for any life.

But the intensity of her performance made Rhythm ... of a Life deeply personal. Her stare had the desperate searching quality of one who has stood on the edge of mortality with time running out. Her writhing on the stage as she struggled to get out of constricting garments appeared drawn from the pain of one who has been seriously ill – and recently. When she finally did dance, the ferocity of it seemed to rise from some personal place deep within. Oh, dancing has always been personal to Gray, but as an expression of liberating joy. Here she looked to be dancing for her life – not so much in the sense of saving her life, although that was there, but in the sense of expressing everything that is precious to her about life, dancing it all out right then as if she might never be able to do it ever again.

Gray's recent experience seems to have brought a new vigor to her work. Not only was her own solo explosive, but the group numbers she choreographed had a similar charge, with Gray challenging the dancers and prompting them to push the envelope some more in their relationships with one another.

And they responded. In the numbers noted above, they were electric, and in the ensemble piece "the voices in my head," choreographed by former Tapestry member Nicholas Young, they became a unit of pulsing, percussive movers. They created a rhythmic soundtrack with hands slapping chests and feet stamping the floor. They raced around the stage, watching one another and smiling like kids engaged in a great game. They seemed connected in new ways: to one another, to their leader, to dance, to rhythm, to life. 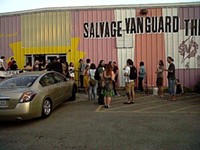