This Is Who We Are #9: Mary Moody Northern Theatre's bobrauschenbergamerica 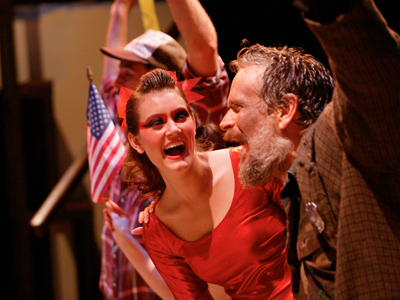 It's that we're all drawn to all kinds of things, an expansive variety of objects and experiences and people that, set down cheek by jowl, feel as if they couldn't belong together. And some of those things we can't explain our attraction to – things that most folks dismiss as cheesy or inconsequential or lame, like Seventies bubblegum music or that nerdy guy in class. That ramps up the randomness, the peculiarity of such a list. We can't say why we love all these things. We just do, with full, open hearts.

As it is with us, so it was with Robert Rauschenberg ... but more so. The pop artist seemed to love everything, a lot of it stuff that most people labeled junk: tires and stuffed animals, Coke bottles and umbrellas. But where some saw trash, he saw beauty, and he scooped up these things in that big Texas embrace of his and celebrated them in his "combines," those raucous, messy collages of paint and sculpture. It didn't matter what the things were or why he thought they were beautiful. He just did, loving them with a full, open heart.

As it was with Robert Rauschenberg, so it is with bobrauschenbergamerica, the play penned by Charles L. Mee and produced at the Mary Moody Northen Theatre under the direction of David M. Long. Its freewheeling compendium of scenes – 43 in all – pays theatrical tribute to the artist by throwing wide its arms and embracing as expansive a variety of objects and experiences and people as the late Rauschenberg did and slapping them together in a glorious jumble, an exuberant hodgepodge. So we have actors riding bicycles across the stage, a man in a chicken suit firing a gun, a bathtub on wheels, laundry falling like rain from above, a cloudburst of ping-pong balls, actors boot-scootin' and joining voices in a high-spirited rendition of "Afternoon Delight," and so on. Babs George, sweeping in as gracefully as Loretta Young and wearing June Cleaver's pearls, represents Rauschenberg's mother as an idealized suburban hausfrau who describes her son glowingly but is at a loss to explain how this Port Arthur boy reared in the Church of Christ could become an art-world legend. "Art was not in our world," she says. But in the show's animated careering from picnic to lovers' spat to line-dancing to manic acting-out of a crazed conspiracy-theory thriller to what-all, we see what Rauschenberg saw: that art is everywhere in our world. Art is our world. And the show shouts it with the exultation of a Walt Whitman song.

Indeed, Jamie Goodwin, sporting a scraggly version of the Good Gray Poet's beard and the habiliments of a hobo, launches into an ode to Whitman styled after "Song of Myself" and "I Hear America Singing." His jubilant delivery summons the spirit of Whitman and fuses it with that of Rauschenberg and that of America. For this country, in theory if not always in practice, loves all kinds of things, too, even that which is dismissed by many as junk: the tired, the poor, the huddled masses yearning to breathe free. With its splendid sprawl and exuberance and tenderness, MMNT's bobrauschenbergamerica reminds us of the wonder in the mundane, the extraordinary in the ordinary. It's ours to treasure if we'll throw wide our arms and embrace it with full, open hearts. 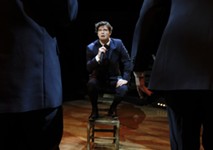 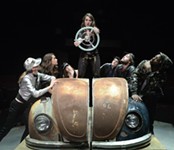