This Is Who We Are #8: Performance Encounters' Home Entertainment 2009

A daily affirmation of Austin’s creativity from the Chronicle archive

Our ability to experience art in person and with others is presently in lockdown, and we don’t know when it will return, if ever. Local artists are already adapting to this situation – many sharing art online – which speaks to Austin’s driving spirit of creativity. In tribute to that spirit, this series recalls past works that affirm our creative force. 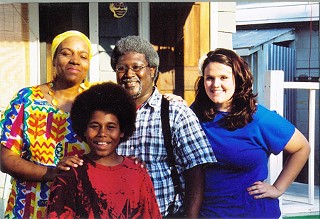 A late-spring sky, the brilliant blue softened by the approach of twilight. Soft air stirred by a languid breeze. A dozen small patio tables spread across an emerald carpet of grass.

On the tables, fresh flowers in water. Plates heaped with garden greens, fresh fruit, pasta with sliced peppers, salmon, pecan-crusted chicken with watermelon relish. Tall glasses of lemonade and iced tea. Grooving sounds by Stevie Wonder and Sly & the Family Stone underscored by the hum of neighborhood traffic. Grackles screeching. And, curiously in this backyard, a front porch that faces the audience members at their assorted tables.

Not the usual setup for a play, but then, Home Entertainment 2009 isn’t your usual play. It is more fittingly described by the name of the company that has produced it: Performance Encounters. Through this show, we’re given a chance to encounter something, to make contact with a thing or things we may not know or that perhaps we knew once but lost: an ambience, a mood, a way of living, lives, stories, histories, a community. The connection isn’t made with a single storyline advanced by developments in the plot but by characters who share reminiscences and anecdotes and songs, by the breaking of bread, by being in a very specific place and absorbing its sights and sounds and atmosphere.

The term “play” best applies to Home Entertainment as its subject. Most of the material centers on what folks do and have done to entertain themselves over the last 70 years. Our guide in this is Aunt Zadie, a senior citizen born and reared in the Eastside’s Blackland neighborhood and a living repository of its history. As played by the ever-engaging Gina Houston, Zadie is a gushing fount of memory, enthusiastically describing how kids back in the day made kites from newspapers and sticks and playing balls from rubber bands and rags, eagerly recalling how she got a whuppin’ for lying about swimming in a cattle tank, and proudly belting out the “Black national anthem,” “Lift Every Voice and Sing.” “We invented our world,” Zadie says, and though she tries not to be judgmental about the technology-driven diversions of the younger characters, Amanda and Gabriel, the sparkle in Houston’s eye as she conjures that world of imagination and creation signals how much she favors those olden, golden days. And it’s hard not to agree with her, especially the way her bias is buttressed by MacArthur Moore’s Collin, a friend old enough to recall homemade slingshots and customized bicycles with steering wheels in place of handlebars. Moore feeds Collin’s tales with a jaunty, cackling pleasure and turns in a juicy version of Corey Harris’ “Fish Ain’t Bitin’,” backed by Dan Ruppa’s bluesy guitar.

The younger characters do address more contemporary play – Maryann Menzies’ appealing Amanda leads the audience in an origami lesson, and Joshua Swan’s spirited Gabriel challenges Zadie to a kids’ counting game – but with the moon tower at Chicon and MLK rising up behind the faux front porch cleverly constructed by designer Ia Ensterä, we always have a sense of history being present. And the way in which producer/director Leticia Rodriguez has invited us into that history and this community is welcoming and warming. By making us feel so at home here, she opens us up to see this neighborhood as the home of others. With the cookies and gelato, with the singing, with the feel of the open air, with the setting of the sun, we are brought into this community and made to belong. It’s a lovely, loving way to honor a past and a place well worth the encounter.

In Memoriam: Frank Benge
Remembering the artist, critic, and man of the theatre