This Is Who We Are #7: Sharon Marroquín's The Materiality of Impermanence 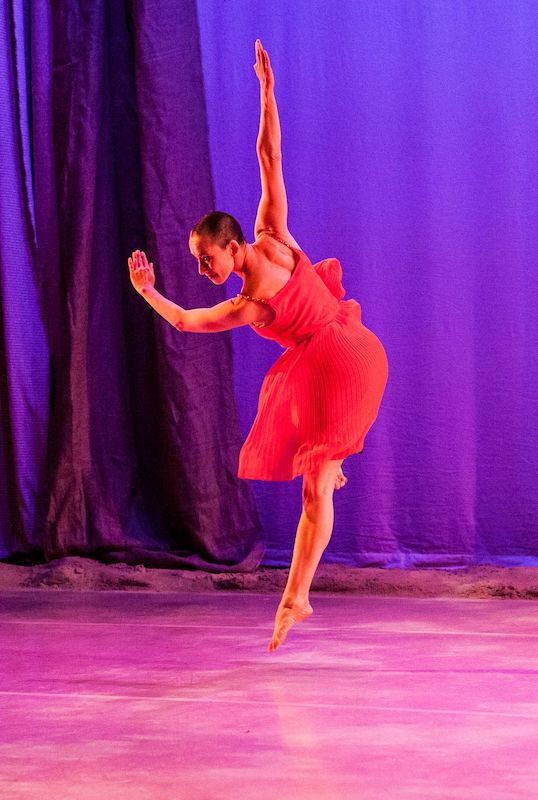 Sharon Marroquín in The Materiality of Impermanence (Photo by Lynn Lane)

Against the wall of a small open shelter, she huddles alone. No words issue from her, but the look in her wide eyes, the strain on her drawn face, the tension in every limb bespeaks terror, anguish, panic, despair. This woman thrashes from one dark emotion to another as she physically thrashes about the small space, desolate and desperate. At one point, she stands with her back pressed against the wall and, with her left leg to anchor her, traces an arc upward with the right leg while her torso and head trace an arc downward. She manages to tilt her trunk 45 degrees beyond the right angle and hold it there – a feat that would be enjoyably impressive if not for the harrowing context. It takes this woman's fraught condition in a surreal direction, literally upending her. What had already been a wrenchingly painful sequence was unnerving as well.

If you had known anything about the woman who created and was performing this dance – and you should have, since she explained outright in its program that this was her response to her experience with breast cancer over the past 26 months – then you felt you were seeing her relive the moments after she was informed she had cancer. And while there isn't a word about it in her notes, the fact that Sharon Marroquín would push herself there in the opening segment of The Materiality of Impermanence – and return there for every performance – speaks volumes about her personal investment in and commitment to this work. In its premiere run last week, she held back nothing of the pain, uncertainty, or urgent need that she felt during that trauma, and the immediacy of her performance drew us deeply into the dance, making this 90-minute expedition into one person's catastrophic illness an intimate journey for all.

Unlike the disease dramas of Hollywood, this one wasn't full of hospital beds, IV drips, and doctors looking worried as they scan the patient's charts. Save for a segment in which a recorded voice listed what sounded like enough treatments and drugs for a whole ward of patients, Marroquín avoided the medical. Her focus was the human, on coming to terms with the ravaging illness inside her and what treating it did to her own body, how the physical changes affected how she saw herself and living with cancer affected how she related to those around her. We saw women rush to and crowd the site where Marroquín had been distressed and, in time, embrace her; saw Marroquín on video struggle with a large, cumbersome suitcase and lie with shards of glass on her breast; saw three women with mirrors scramble away from and return to them, eventually baring their breasts to the glass. In a striking sequence, aerial dancer Elizabeth Rose took the physical disorientation of Marroquín's opening even further by twisting, flipping, and dropping through the air while suspended within a pair of blood-red silks hanging from the ceiling. Twelve-year-old Ciara Regimbal-Walsh made an affecting partner for Marroquín in a duet where the two held each other and pulled away while asleep and waking. Again and again, Marroquín emphasized the necessity of human connection, how the simple touch of flesh on flesh can do so much to ease the dis-ease and heal what's been corrupted. No one should be alone in that struggle.

Clearly Marroquín was not alone in realizing this work. She surrounded herself with dancers whose fierceness of spirit complemented her own and who gave her unwavering support. Her designers – Ia Ensterä, set; Stephen Pruitt, lights; and Todd V. Wolfson, video – created an arena vividly suited for a life journey: bordered in sand, watched over by suspended paper cranes and a floating white tree with scrolls tied to its branches, and drenched in atmospheric colors. And a half-dozen cancer survivors shared the journey, walking the stage with the dancers and opening their tops as light faded.

In the end, though, Marroquín took the stage alone again, ascending via a pair of snow-white silks to the roof of the shelter where she had suffered so. But now her face and open arms radiated serenity. Whether she was meant to be on another plane or still in ours, she had reached a place of triumph. And those who witnessed The Materiality of Impermanence stood in agreement that this was true for Sharon Marroquín in life and in art.