This Is Who We Are #2: Sally Jacques' The Well Inside 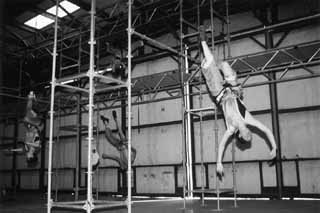 She enters the space alone, and you know that before you even see her. For as she moves from behind the audience down the aisle that separates two sections of seats, this woman steps into a narrow channel of water and we can hear water sloshing with her every step, the volume and rhythm of the sound signaling an individual by herself. When she has passed us, this woman steps from the shallow channel into a circle of light – actually a circle with a brighter circle surrounding it, like the corona of an eclipsed sun or the wall of an invisible well – and here she dances ... alone.

Solitude proves to be significant in The Well Inside, Sally Jacques' extraordinary new site-specific dance, resurfacing in it again and again. When the first dancer leaves the circle and walks toward the back of the space, she passes between two towers of scaffolding in which two other dancers, suspended in the air some eight feet above the floor, swing and sway and spin, right-side-up and upside-down. Their movements are identical, in sync, so the same distance is always between them, the same gulf of space around them. As this motif is repeated in subsequent segments, it suggests human beings side by side, going through the same motions, living the same experiences, but separately, disconnected from each other.

Similar impressions come from other dancers. Some hang in the air from still greater heights – 15, 20 feet above the concrete floor of the former airplane hangar where this is staged – and as with artists of the high wire and trapeze, we become conscious of the vastness of the air around them, how apart from the world they are. But even when dancers are on the ground and making contact, it is only glancing: touches that scarcely connect, embraces that release the instant they occur. A dancer reaches out with an arm as if to pull another body into his, but scoops only the air.

All these missed connections, this aloneness, generates a mixture of awe and melancholy. The awe comes from the astonishing physical effort and risk involved in the presentation: twisting and twirling one's body while hanging upside-down off a catwalk 20 feet off the floor, walking completely upright on a wall with only netting around the waist for support, swinging through space like a human pendulum on the strength of one arm hanging onto a fabric strap. The five performers here – Laura Cannon, Theresa Hardy, Alby Roblejo, Andee Scott, and Nicholas Young – exhibit levels of athleticism and daring that take your breath away. But the grace and sensitivity in their movements are equally amazing, and they account for much of the melancholy. The arc of an arm, turn of a head, slow, deliberate steps through a narrow channel of water, are executed with such tender fluidity that they communicate an awareness of isolation and yearning for connection.

The yearning is amplified by the wash of blue that colors the production. Some of it is literally blue, as with the blue cloth that Kari Perkins uses to wrap the torsos and legs of the dancers and the blue light with which Jason Amato bathes them. Some of it is the blue of feeling, as with the sounds provided by William Meadows – the lonesome call of a chiming bell, a striking gong – and the musical selections, which range from Dudouk melodies to a Puccini aria to piano music from the film Sophie's Choice and which seethe with longing. Samuel Barber's elegiac Adagio surfaces here, its almost unbearable ache magnified by Meadows, who increases the volume until the keening of the violins takes on a crystalline edge, sharp enough to slice a soul to ribbons.

But once Jacques and her company have imparted this profound sense of longing in isolation, they initiate a shift in mood. The dancers, who have previously taken little notice of one another or who have spurned physical contact, begin to watch each other perform. In the duets and trios, they touch each other without pulling away, they linger in their embraces. They dance together. Human connections are made. The final dance is a full-fledged duet between Nicholas Young and Laura Cannon, the solitary figure from the opening of the show. Each grasps a separate strap that allow them to swing freely across the space, but they work in tandem, providing support for each other, pushing each other, carrying each other in great sweeps through the air, partners in flight. At the end of it, they reach across the distance separating them and simply, gracefully, take hands. In a work that is rich in beauty, the union in this finale makes it all the more beautiful.