Three older men, two shirtless and in swim trunks, all wholly absorbed in conversation with one another and oblivious to all else. It's unlikely as a subject for a statue, much less one to be beloved, but so it is with Philosophers' Rock, which has stood outside Barton Springs Pool for 26 years. And now its maker, Glenna Goodacre, has died.

The sculptor was at her home in Santa Fe, where she's lived for 35 years, when she passed of natural causes. She was 80. 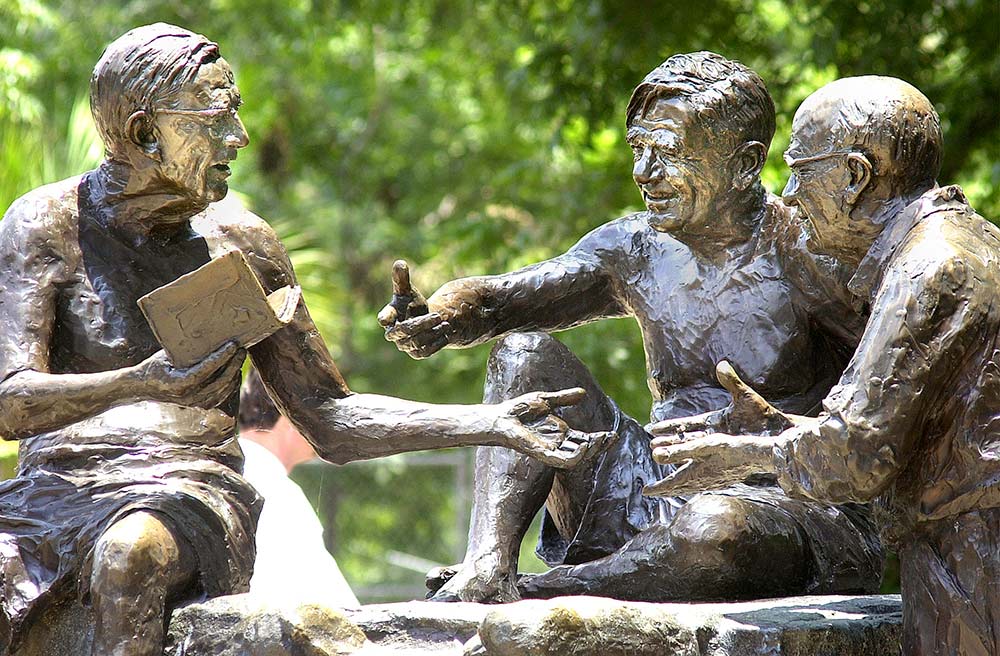 Goodacre completed Philosophers' Rock just months after one of her greatest achievements as an artist: the Vietnam Women’s Memorial, honoring the 11,500 women who served in that war. The work, like all of Goodacre's sculptures, is figurative, depicting three women in fatigues on the battlefield with a wounded male soldier. Her design was selected from more than 300 submissions, $4 million in donations were raised over a decade to pay for its creation, and 25,000 people came to the National Mall in Washington, D.C., to see the statue dedicated on Veterans Day in 1993.

The sculptor's follow-up in Austin was something of a study in contrast. Author Lawrence Wright had the idea that the city could use more statues, and with a half-dozen friends and like-minded citizens – Elizabeth Avéllan, Marcia Ball, Amon Burton, Stephen Harrigan, Vicent Salas, and Bill Wittliff – founded the nonprofit Capital Area Statues. CAST's first project was a statue commemorating three of the city's most notable writers and intellectuals of their day, writers and intellectuals who also happened to be steadfast friends: folklorist J. Frank Dobie, naturalist Roy Bedichek, and historian Walter Prescott Webb. As the three made a four-decade practice of hanging out together at Barton Springs Pool, with Bedichek favoring a particular limestone outcropping west of the pool's diving board and many a conversation taking place at said rock, Goodacre felt it was the natural setting for the statue. She was also the one who dubbed it "Philosophers' Rock." In just a couple of years after the group was founded, CAST raised some $200,000 in donations to fund the large bronze, and one year after the dedication of the Vietnam Women's Memorial, Goodacre's Philosophers' Rock took up residence outside the main entrance to the pool. The next year, the Chronicle was already honoring it as "Best Public Art" in the 1995 Best of Austin issue: "Sculptor Glenna Goodacre's portrayal of these men – informal, languid in repose but vigorous in intellect, connected with the environment and each other, having a good time – captures their spirit and Austin's, too, at least Austin's at its best." 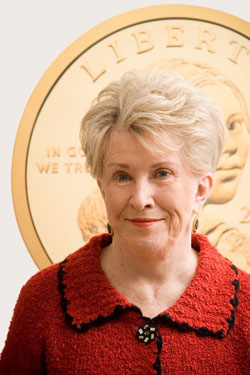 Her contribution to Austin came during what was the most fertile decade in Goodacre's 45 years as a sculptor. Following the Vietnam Women's Memorial and Philosophers' Rock came her seven-and-a-half foot bronze of President Ronald Reagan unveiled at the Reagan Presidential Library in California in 1998. In 1999, Goodacre won the competition to design the gold dollar coin featuring Sacagawea, the Shosone woman who helped guide the Lewis and Clark expedition. Her bas-relief design features Sacagawea with her infant son Jean Baptiste Charbonneau strapped to her back – the only coin to feature a mother and child. Two years earlier, Goodacre had won another competition, one for a Philadelphia memorial to Irish immigrants who came to the U.S. to escape the terrible potato famine of the 1840s, but it took a full five years for the sculptor to complete the 35 life-size figures that populate the monumental work that's 30 feet long and 12 feet high.

Though Goodacre was based in New Mexico for many years and known nationally for her work, the Lubbock native – she was the daughter of Melba Tatom Maxey and famously litigious developer Homer Maxey – worked frequently in her home state, and it took every opportunity to claim her for its own. In the late Eighties, Goodacre was one of five sculptors who created life-size statues of Lone Star heroes for Sea World San Antonio; hers included Stephen F. Austin, President Dwight D. Eisenhower, Scott Joplin, Barbara Jordan, Katherine Ann Porter, and William B. Travis. (The full collection of 18 statues was donated to the city of San Antonio in 2000.)

In 1997, Goodacre was inducted into the West Texas Walk of Fame in Lubbock, and she received an honorary doctorate from Texas Tech University. The Texas Cultural Trust named Goodacre the Visual Arts recipient of the 2003 Texas Medal of Arts, and the same year the National Cowgirl Museum in Fort Worth inducted her into its Hall of Fame. In 2008, part of Eighth Street in Lubbock was renamed "Glenna Goodacre Boulevard."

Not bad for a sculptor who was given a "D" by a college art teacher and told that she had no future in the field. After hearing that, Goodacre did spend a decade pursuing painting, but when she came back to sculpture, she did so with all her passion and never looked back. (The school where she was told not to pursue sculpture, Colorado College, made up for it later by granting Goodacre an honorary doctorate.)