When I hear the word “culture,” I reach for my mouse

You’re prudently staying at home, Austinite, and more power to you and the rest of us self-isolators in the midst of these frustrating plaguetime follies. Because we’re all getting a little twitchy – or Twitchy – at this point, aren’t we? 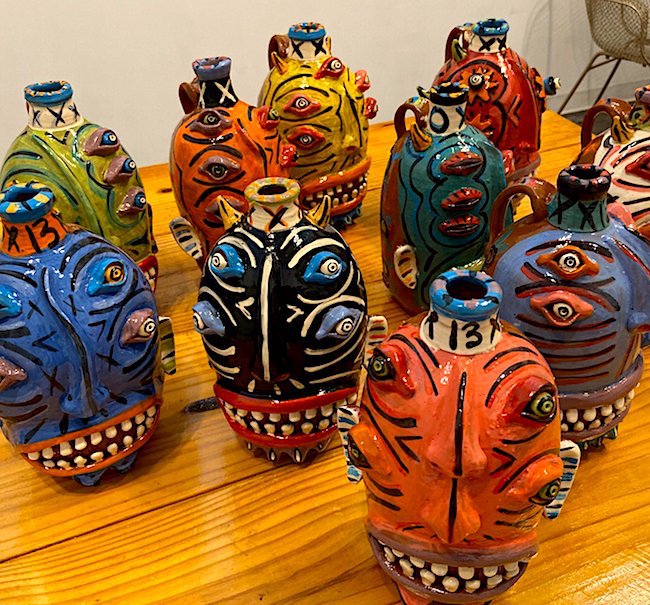 Ceramics by Carl Block, among the many bright treasures at Austin's Yard Dog

Remember? Back in the Before Times?

But be here now, baby, and maybe divert your anxieties by checking out a few of these gambits of entertainment, brought to us by the creative community we’re all still part of.

1) Friday afternoon offers a look into the music studio of Austin’s own Graham Reynolds, the affable maestro (and mustard-loving polymath) himself leading the tour of a space that’s as comfortable as it is professional, as stylish as it is practical, and not quite as filled with books as it is with the instruments of music, art, and high-end tech. Join the man for a rare glimpse behind the scenes on Fri., April 17, 3pm.

2) Friday night’s got that increasingly star-studded Isolation Comedy Showcase from Comedy Wham, featuring some of the best stand-up comics in these here parts. Thing’s so damned popular now, they’re running a new lineup two nights a week – Tuesdays and Fridays – but it’s Friday that’s the designated party night. We guess that means BYOB, in general, but it also means that this upcoming show (Fri., April 17, 8pm) has Vanessa Gonzalez and Daniel Webb among its performers. We mean: Yow!

3) Saturday, after you've woken up and chugged some coffee (or Tito's or whatever), you could enrich your day with Andy Coolquitt and Alix Browne’s exhibition “How a House Works,” as newly processed for virtual impact by the ceaseless curators at Austin’s Fluent~Collaborative. And maybe also spend some time among the treasures of Yard Dog Folk Art, where the likes of Bob Schneider and Margie Criner and Jon Langford and Carl Block and more display an array of works to set your rods and cones ablaze.

4) And then it’s the late afternoon again, and you can scratch your inexplicably growing I-wanna-see-some-modern-dancework itch by watching this gorgeous Kathy Dunn Hamrick piece called Parade at, say, 5pm; following which you should totally make yourself something nourishing and delicious to eat – hey, here’s the Chron's own stash of recipes! – and then you'll probably be feeling like, hey, isn’t it time for another laugh or two? No, not more stand-up, necessarily: You could catch the newest performance by those top-notch improvisers Parallelogramophonograph live on Twitch at 7:30pm or click over to see what’s the big comedy deal on ColdTowne TV’s live variety show at 8pm.

Yeah? Some pretty good stuff, right? And of course we have our more extensive Arts Listings ongoing right here. But that’s it for the –

5) Wait, no, let’s not leave Sunday unaccounted for, Austinite! And the local live theatres may be closed, but on Sunday (April 19, 7:30pm), the Vortex Repertory Company presents two new short plays from Rudy Ramirez’s CoviDecameron Project, with pieces by Roxanne Schroeder-Arce and Rory Leahy, as performed by Ellie McBride, Lowell Bartholomee, Genevieve Schroeder-Arce, Robert Faires, and Jennifer Jennings … and that premiere is immediately followed by a video rebroadcast of the Vortex’s 2012 aquatic spectacle of dance and sound called Water. Curtain rises … lights go up … acting intensifies. Watch it all here.

Alrighty, then. Hang in there, OK? We’ll make it through this pandemic shit and then, renewed and tempered, we’ll kick even more ass than ever before – in an appropriately creative fashion.