The Motorblade Poster Man Is Leaving Austin for Good

Fritz Blaw, that irrepressibly mobile resident of our city for 43 years, is bidding this town adieu. 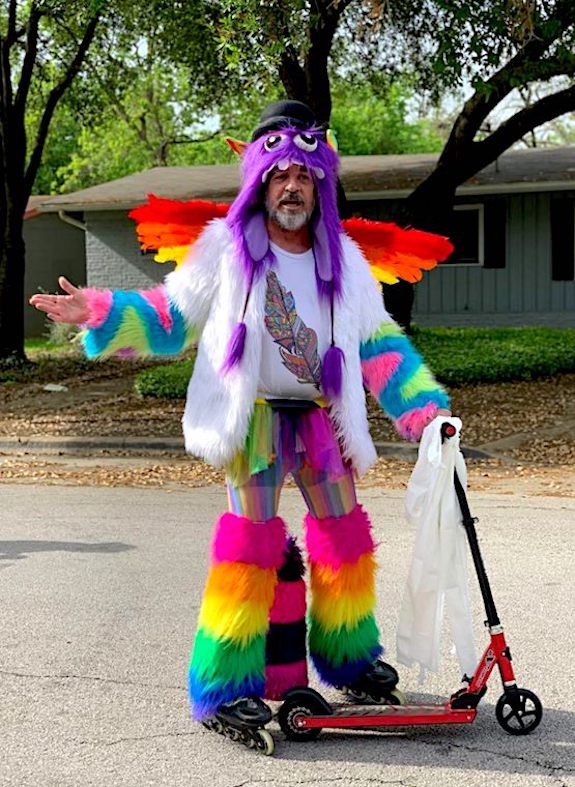 Fritz (or, more formally, Frazier Peters) Blaw – the man whose Motorblade Postering Service has been responsible for decades of art and art promotion via distribution of gig posters on bulletin boards and windows and cafe walls all across Austin; the former human mascot of Texas Roller Derby and more recent skating-around-the-neighborhood-in-colorful-costumes spectacle of socially distanced joy – is leaving us on July 31.

“In the spirit of Easter I am reborn,” went Blaw’s emailed and Facebook-posted (and probably tweeted and turbovoxed) announcement yesterday. “I have decided to shake this Austin coil and head to Philadelphia to live with my architect sister and brother-in-law and their 16-year-old son, and I’m saying goodbye to Austin after 43 years.”

And so another one bites the dust. Or, rather, another one hits the trail: At least Blaw will be alive-and-kicking and infusing a different city with his particular style of weirdness now, right? But, after more than four decades in our suddenly virus-stalled metropolis along the river, what will he miss the most about living in Austin, Texas?

“Eavesdropping, interrupting, and being questioned by different people at over 200 groovalicious locations every month,” he says. "Groovalicious," he says, for real. And what will he miss the least? “The ever-increasing sensation that my skin was becoming air-fried from the heat, sun, and humidity.”

Ah, careful, Fritz: There’s always something to weather, no matter where you go.

And now there he goes – and we wish him well.