Because these ain’t the endtimes yet: Not. Quite. Yet.

Look, this current situation of ours?

Let’s not overestimate this thing: It’s not an apocalypse.
It’s not even a dystopia yet. 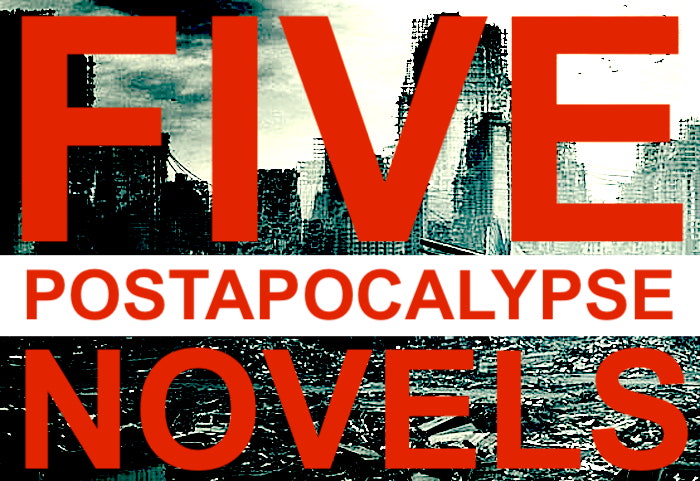 Seriously. The dystopia’s not scheduled to happen until after that orange-tinted turd in the White House is re-elected by the teeming cretins (and the machinations of the electoral college) that deposited him there in the first place. And then, only then, will we slide more surely into the sort of nightmares presented by low-budget direct-to-video sci-fi entertainments of the Eighties and Nineties.

[Note: No, reader, I’m not providing specific cinematic examples for you here. Google it, please. Or, for better results, ask Whittaker or Nilsen.]

But even that possibly imminent hellscape isn’t an actual apocalpyse. And any dystopia will only be a case of Same Old Shit As Ever, won’t it? Except, as they say in the captions, *shittiness intensifies.*

But, sure, sometimes there’s an actual apocalypse. Sometimes there’s an event or close-knit series of events that destroys global civilization and leaves, at best, struggling shards of humanity scavenging through the wreckage. And maybe, eventually, after much suffering and effort, those valiant people will achieve something similar to their past’s most golden age – if not even better.

But, ah, let’s not get all hopeful, shall we?

(It’s fear that is the mindkiller, yes, thank you, you Bene Gesserit witch.
But hope is only fear’s weaker companion.)

Still, the apocalypse, and what comes after: It’s been written about. Oh, it’s been gloriously written about! Even before the last couple decades’ relentless flood of YA fiction of similar flavor, there are so many good novels dealing with post-apocalyptic narratives. And here, reader, I gladly offer specific examples – five examples – that can provide you with many hours of enjoyment in these self-isolated times … 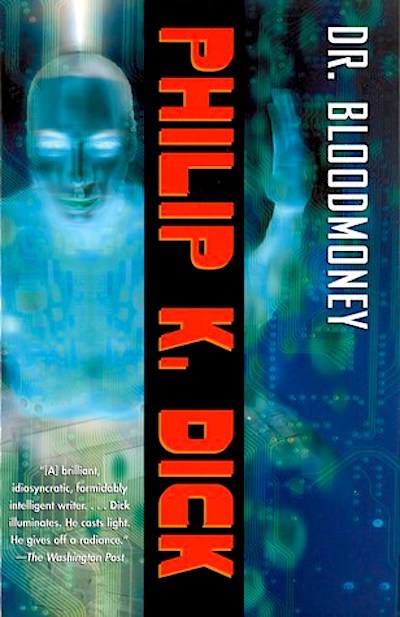 1) DR. BLOODMONEY BY PHILIP K. DICK
Sure, you know Dick. And some of his fiction’s been made into movies or TV series, oh boy, so even your less literarily inclined friends and neighbors have been able to dig his brilliant, wacky, paranoid, reality-questioning, and ultimately crypto-Christian groove. This mid-career tale’s got a partly mutated group of humans trying not to disintegrate among the remains of California’s Marin County. By the time our normal AF protagonist is eating a dead rat raw, you may be too freaked out (by the telekinetic phocomelus Hoppy Harrington, and Edie Keller’s internally conjoined twin who can telepathically communicate with the dead) to notice. Bonus: The eternally orbiting accidental-DJ-to-the-world astronaut Walter Dangerfield.

FIRST LINE: Early in the bright sun-yellowed morning, Stuart McConchie swept the sidewalk before Modern TV Sales & Service, hearing the cars along Shattuck Avenue and the secretaries hurrying on high heels to their offices, all the stirrings and fine smells of a new week, a new time in which a good salesman could accomplish things. 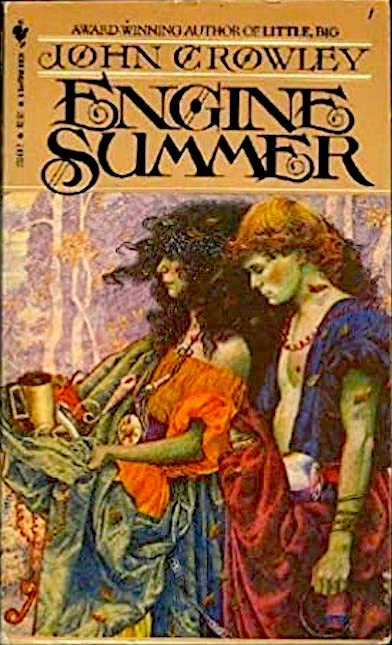 2) ENGINE SUMMER BY JOHN CROWLEY
Oh! This book! One of my favorites of any type of book, ever. What happens when a young man, a curious and wanderlusted soul coming of age within a post-apocalyptic commune that’s thriving in the midst of the previous civilization’s ruins … what happens when that truth-seeking youth finds what he’s been looking for – enlightenment? sainthood? – among the earlier world’s arcane miracles of technology? (Disclosure: Crowley’s most acclaimed work has always been the novel Little, Big. And, try as I have, I can’t really get into it. And all the other Crowley fiction I’ve read, well, I can tell it’s, ah, it’s sublime, okay? It’s so rich and vibrant and all of that, so deeply considered and constructed, right? But what’s supposed to be compelling about it – about Beasts, Daemonomania, Lord Byron’s Novel – has always eluded me. Except for Engine Summer. And, unlike my dear wife, I tend to not re-read books. But I’ve read Engine Summer more than twice. Hell, I re-read Engine Summer every few years. Because of its unique setting; because of its textured characters and their perspectives; and, in the end, because of how the narrative creepily literalizes the tricks of metafiction that John Barth figuratively exercised in his Lost in the Funhouse collection.) I can’t recommend it highly enough. 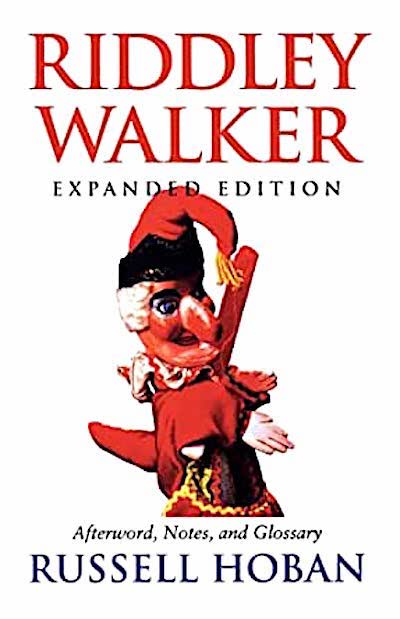 3) RIDDLEY WALKER BY RUSSELL HOBAN
This is, I’d like to suggest, Engine Summer’s darker twin. There’s another internally conflicted young male protagonist, a much uglier landscape to navigate, and the whole story’s told in the decayed vernacular of its titular hero. Set in a British wilderness hundreds of years after whatever man-made catastrophe (nuclear, IIRC) has driven humans back to mythically enriched savagery, this story’s first-person-POV speech isn’t so easy to parse; but, after a few pages, damned if you don’t get into the swing of it – and it imparts such a penetrating flavor (linguistic umami, perhaps) that it’ll stain your brain’s Broca Area for years to come.

FIRST LINE: On my naming day when I come 12 I gone front spear and kilt a wyld boar he parbly ben the las wyld pig on the Bundel Downs any how there hadnt ben none for a long time befor him nor I aint looking to see none agen.

4) ORYX AND CRAKE BY MARGARET ATWOOD This blockbuster novel, eclipsed in Atwood-popularity probably only by The Handmaid’s Tale, is the first of the author’s impressive, scary, increasingly prophetic Flood trilogy. Prophetic, due to the descriptions of technological advances and increased economic polarity and the corporate takeover of just about everything … and only kind of due to the presence of a plague. Because sometimes, see, worldwide (and wildly lethal, in this case) plagues don’t just occur; sometimes they’re manufactured and spread; and, here, the perp might be … a single person? OMG, why? WTF, how? The well-wrought answers and their ramifications in this vivid future world will fascinate your reading mind – and maybe haunt it forever. And then, ahhhh, there’s two more excellent books – The Year of the Flood and MaddAddam – to let you know What Comes After All That. 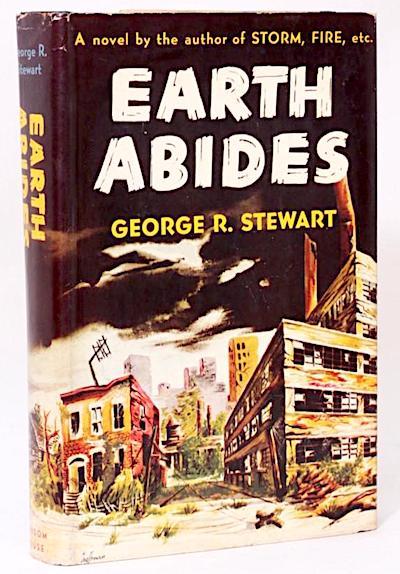 5) EARTH ABIDES BY GEORGE R. STEWART
This one was published way back in 1949 (in which year it won the inaugural World Fantasy Award). The novel relates – as witnessed by resourceful geologist Isherwood Williams – what’s left of a civilization that’s reverting slowly, increment by increment, toward a sort of Stone Age existence after a plague has killed off most of the world’s population and, as the years pass, first the electricity and then the running water fail. Solid, thorough, thoughtful, engaging, it’s a near-pastoral story devoid of – as Wikipedia reminds me – any warring tribes, biker gangs, mutants, or fears-of-radiation that are among the mainstay elements of more recent extrapolations. Realization: It’s the described inevitability of humanity’s regression that’s stuck with me all these years. (Still, if regression is merely the opposite of progression; and progress is, per Paul Kingsnorth’s whole thing, not necessarily something to be desired … who’s to say the ending of Earth Abides is other than a happy one?)

FIRST LINE: ... and the government of the United States of America is herewith suspended, except in the District of Columbia, as of the emergency.

And don’t forget, citizen: If you can’t get these books from Austin's own Half Price Books or BookPeople or Malvern Books stores, try Bookshop.org – because Bookshop shares the profits among all its independent-bookstore members. And that Bezos fellow is already making enough goddam money, n’est-ce pas?