The Invoke Quartet in Quarantine Times

Hey, how is the Invoke quartet – last year's Best of Austin winner for "Most Foot-Stompin' Classical" – doing in our currently viral and socially distant times? 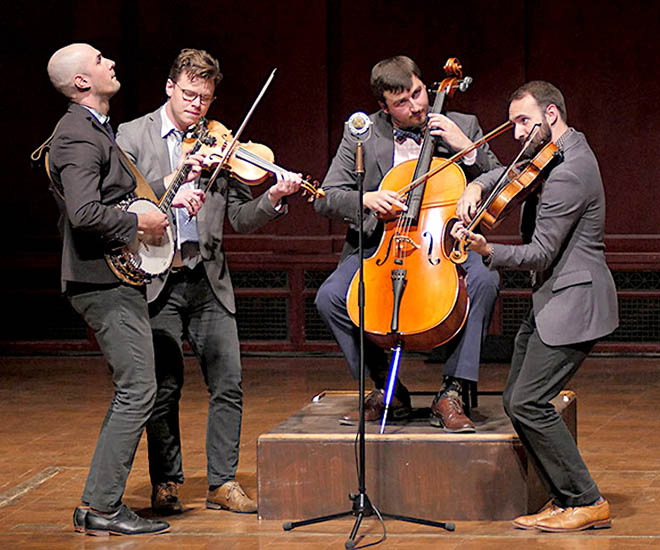 Well might you wonder, as these stringfellows tend to flourish concertwise in the spring, and yet here we all are and the only thing doing any flourishing lately is Zoom stock and every city’s DIY mask-making community.

So, what are Nick Montopoli, Zachariah Matteson, Karl Mitze, and Geoff Manyin doing with their copious free time, all sequestered and unable to rehearse and jam IRL? Are they binge-watching, what is it, Ocelot Prince? Serval Sovereign? Something like that. Or are the friendly foursome finally getting around to organizing their kitchens' haphazard stash of Tupperware and Rubbermaid products?

Invoke recently made their online debut with Invoke in Pieces, livestreaming a show in which each member played a solo set. And how did that go? And will they do more shows? And –

Ah, journalism continuing as ever, we asked the group a few questions via the internets. And by the time we’d gotten our own collection of mismatched plastic food containers sorted, Invoke’s ramen-loving fiddle player Zach Matteson responded, and this is how the interview went:

Austin Chronicle: What was that first virtual show like for y'all, and what was the response?

Matteson: Our first “virtual” concert was a really great introduction – for us – to the online concert world. We’d never done anything like that and it was fun to see all of us figure out what we wanted it to look like/feel like – which felt like a lot more creative control than a typical concert on a stage in a club or theatre. We were really surprised also by the high viewership and response. We haven’t had that high of a turnout since, but there was a sort of pent-up energy around live concerts right when social distancing started to happen. But, we’ve continued putting on a show every Friday since, because a lot of our friends, family, and fans are looking for music and connection, which is something we definitely have to give. We might even continue these virtual concerts after the shelter-in-place has lifted, because it was so great to talk to and share with folks who haven’t seen us in years!

Austin Chronicle: So y’all were specifically doing solo sets for Invoke in Pieces, but is there a way, despite issues of lag and timing, that y'all might perform, or try to perform, together as a quartet online?

Matteson: We’re currently looking into that! That’s something very hard to replicate, but we’ve seen some groups have varying amounts of success. Last week, we had “Story Time With Invoke” where we each read a short story and another member would improvise a score to the reading. It was a lot of fun, letting us share some creativity on the spot and make something together that didn’t require precise “timing.”

Austin Chronicle: What other classical groups do you know of who are going virtual?

Matteson: A lot of our friends are doing some sort of virtual content creation. Our friends at The Violin Channel are doing a concert every week from artists’ living rooms, and there’s a great new music collective called Less Than 10 that’s doing some interesting things from a distance.

Austin Chronicle: And how else, besides music, are y'all keeping yourselves occupied and at least relatively sane lately?

Matteson: Well, Karl’s been taking early morning walks with his dogs Kora and Max. In addition, he’s running at least four D&D games at the moment – all the members of Invoke participate in one, too. Nick’s been doing lots of different long-distance recording projects and working remotely for Graham Reynolds. He also has a full squat rack of weights in his shed, so he can keep up with the workout routine. Geoff’s been keeping up with teaching remotely and getting some good gaming in. And I’ve had a lot more time to spend writing poetry: I have about eight ongoing Renga poems, which are collaborative longform poems based around haiku. It’s been really fun experimenting with different forms of expression and creativity – we have significantly more time on our hands, so why not?!