MacIvor’s House, Now In Your House

If you think your life is messed up, citizen, you’re not mistaken – but even right now it might not be as bad as Victor’s life. Victor, the contentious subject of Daniel MacIvor’s one-man show House, who didn’t need any novel coronavirus antics to turn his world into a devastated hellscape. 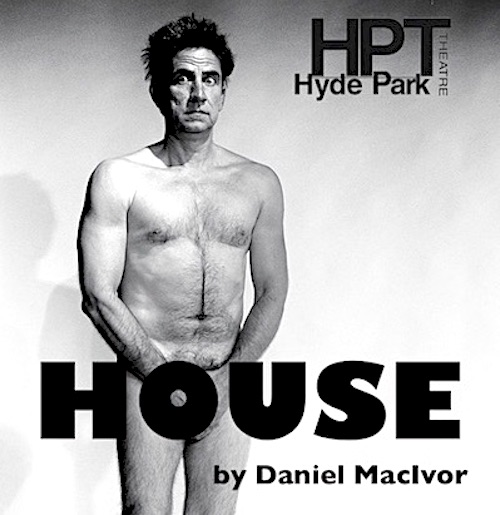 Note: There's no nudity in the show, actually. It's more like metaphorical nudity of the soul.

Victor, as portrayed by Ken Webster for Hyde Park Theatre. Victor, whose mother is possessed by the devil; whose father is the saddest man in the world; whose sister is in love with a dog.

Victor – who you can watch falling apart, in MacIvor’s House, on YouTube this Saturday night. As you can see in the Chronicle's ever-updated Event Listings online.

For real: HPT was in the midst of the live show’s run IRL when the Big COVID Kibosh came down on our city and sent everyone into seclusion.

“Fuck it,” said Webster, probably – although tbh I’m only putting those specific words in his actorly mouth. “Fuck it, I’ll do it on-camera.”

“Yeah,” I imagine his wife (the actor and bestselling author) Katherine Catmull agreeing. “Fuck it, you can do it on-camera.”

But he did, in any case: It’s been captured on video, as directed by Eric Graham of I.C. Pictures, with lighting by Don Day and stage management by Pearson Kashlak, and they’re releasing it via YouTube on Saturday, March 28, at 8pm.

“MacIvor’s agent is on board with us sharing the performance online,” Webster actually told us. “We can even do five more online performances after this special Saturday show. Currently, we’re thinking we might do one per week.”

Now, I haven’t seen the thing myself – not this video version, anyway. I reckon E. Graham and company, professional AF and with a certain Hyde Park sensibility, will knock it outta the park; but you can judge that for yourself. But I watched Webster monologuing the dark and funny tale onstage just a few weeks ago – I watched it twice in one week, even though I’ve also caught both earlier iterations over the past 20 years – and it’s one of my favorite things. It’s just so … sad, and hilarious, and fucked up, and well done … and now you’ll be able to see it at home.

These harsh times come with the strangest comforts, don’t they?

[Ed. Note: "More than one performance," did we say? Mistake! Misunderstanding, anyway, as sometimes happens in the midst of a plague: House got just that one YouTube outing on March 28: Brilliantly accomplished and nicely fundraising, but that's all we get unless other negotiations occur in the future.]