How the hell can a live, improvised comedy show be done virtually — with each of a troupe’s four members streaming from their own separate abode — and still have that, you know, improv comedy feel? 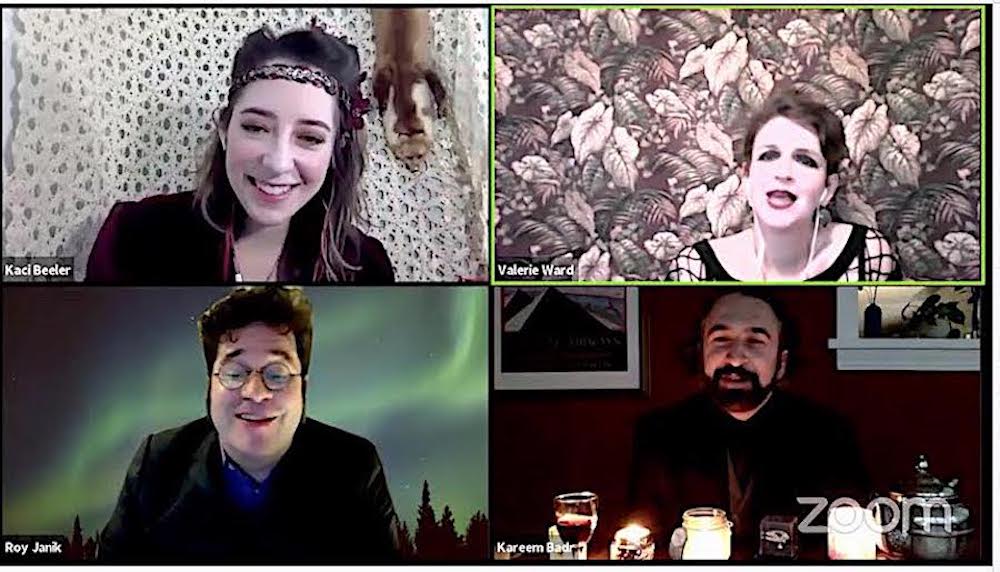 Austin improv troupe Parallelogramophonograph knows the answer. Because they — Valerie Ward, Roy Janik, Kareem Badr, and Kaci Beeler – PGraph for short, please — they just did it for the first time.

Correction: They just did it successfully, entertainingly, for the first time.

“We spent the first five to ten minutes just getting comfortable,” says Kaci Beeler, “and then it really took off. A few friends messaged us after the fact to let us know how surprisingly well the show worked and how they loved us getting some things wrong – like switching the camera view or messing with the sound. We’re lucky in that we have our 15 years of chemistry and experimentation on our side. From the early days of performing in bars and getting heckled, all the way to performing for people in Europe who don’t speak English as a first language, this virtual show is just another challenge to play with.”

Note: This is all because of the ongoing coronavirus situation, yes, let’s mention that for context’s sake. But never mind the damned pathogen, let’s hear more about what PGraph did to make their internetted performances work so well.

“Our first show was definitely us figuring out the medium,” says Beeler. “Most of our prep time was spent trying to troubleshoot internet connections and upload/download speeds and interface issues, not rehearsing how we would use it. We ended up discovering that using a Zoom premium account to stream through Twitch was the best solution for all of us being seen and heard clearly – which is essential for anyone who wants to stream their shit. A wonderful side effect is that when you use Twitch there’s an active comment thread on a sidebar where people can make suggestions, talk to each other, and even type hahahaha or leave laughing emojis. Which, when you’re performing into a void, that’s very helpful to see!”

“Well, this isn’t our first time doing a video-medium show,” notes Beeler. “We used to guest on an Austin Cable Access show called Sacre Bleu! years and years ago, and because of our experience doing that, we knew we needed to use real props – no miming stuff like we do onstage – and put a bit of production value into it, to both better connect to the medium and our audience. So, we wore outfits that worked with the themes and made sure to have props nearby that could come in handy.

“For our Corporate Leader Heads show, we made charts and graphs on the fly and held them up to the screen. Our second show, we were all distinguished vampires in fancy clothes with pale faces. Kareem was lit entirely by candlelight and we all had the same idea to sip a glass of red liquid during the performance. Roy used this dumb Zoom background option to put the Aurora Borealis behind his character the whole time. That kind of stuff amuses us, so we figure it would amuse others. That’s usually true of what we do: If we think it’s fun or interesting, we can trust that others will find it fun and interesting, too. Trust is paramount to creativity and so is a willingness to fail. Those tenets are #1 in improvised work, so perhaps we have an unintended leg up in jumping into a new medium with little prep.”

“We’ll be continuing to have PGraph do virtual shows,” says Kareem Badr. “We’ll be broadcasting something every night, either a live show or a rebroadcast of an archived show filmed in our upstairs theater. We’ll be doing live virtual shows of different formats – one we thought of was doing video of 'radio broadcasts' so we can still do genre and narrative – which is what The Hideout does best – and, when it’s safe to do so, we’ll have small casts convene in the theatre to do live shows to an empty theatre that are streamed to the internet.”

Parallelogramophonograph has already hooked up with the new Social Distancing Festival powerhouse of delightful online virus-time diversions, as we reported right here.

"Roy saw some random post about the Social Distancing Fest on Facebook and then submitted our information" says Beeler. "They immediately featured us, which we were really shocked by. Our show was flanked by symphony and opera performances – we were tickled by that."

And PGraph has been working all this stuff out, mind you, while venue manager Badr takes care of switching the popular cafe in the troupe’s Downtown home from dine-in to pick-up service, so locals can still get their coffee and pastry and sandwich fixes taken care of.

Note: As of press time, they’re good to go.