The renowned sculpture garden takes fundraising to a new height

And so there was Austin’s acclaimed soprano Sarajane Dailey, about 12 feet in the air, slowly spinning on a crescent moon, suspended halfway between the floor and the ceiling of Sky Candy’s performance-and-training space in the arty Springdale General complex on the Eastside of our burgeoning metropolis. 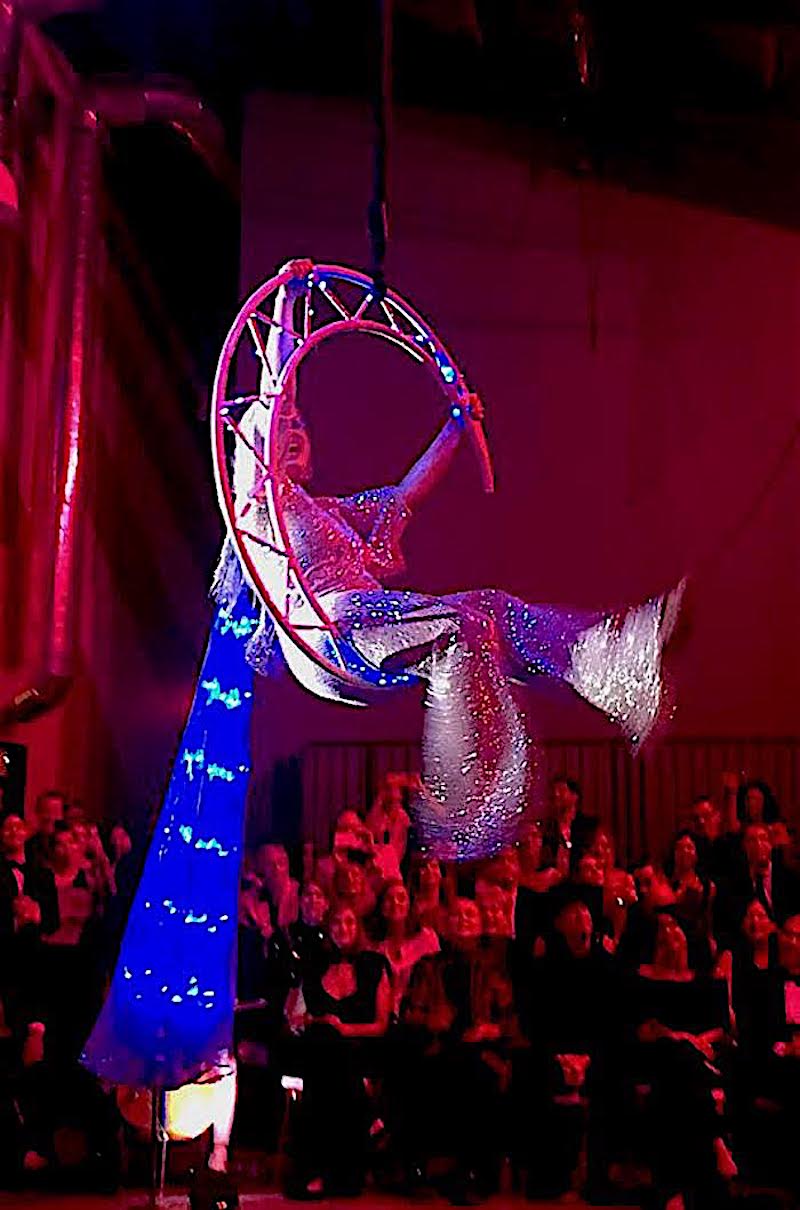 [Note: That’s not just another cheap adjective: If this city is anything at all, it’s damn sure burgeoning.]

Dailey was the hostess and auctioneer for the Umlauf Sculpture Garden & Museum’s first annual Burlesque Ball fundraiser that night – Saturday, Jan. 18 – and of course your Chronicle reporter was there, jaded journo eyes taking in all the glamour and pizzazz, getting an earful of the bidding crowd’s generosity as Dailey cajoled them toward greater dollar amounts – $3000! $4000! $9000! – for such items as a two-night getaway at the Four Seasons in Mexico City, a trip to attend the Grammy awards, a double array of rare bourbon and scotch, and so on in moneyed splendor.

Hell of a fine night, entertainmentwise, and – tell you what – the Umlauf made the right choice in having chef Michael Wards and his Austin Artisan team cater the event, because that lovely spread of savories and sweets was a pure delight for the eyes, mouth, and belly.

That’s the Austin Symphony’s own Peter Bay, the spouse we’re talking about, and he’s not just conducting a concert this weekend at the Long Center. No, see, Bay has – like back in 2012, remember? – once again been subjected to the scrutiny and choreographic panache of Forklift Dance Company’s Allison Orr …

And so, on Friday, Saturday, and Sunday nights, Jan. 31-Feb. 2, the ravenhaired maestro will be conducting an original score composed by Graham Reynolds and performing a series of dances based on his own conducting style.

Now, Bay won’t be up in the air like his wife was at Sky Candy, no … but you might feel a little high yourself, just watching him. Fortunately, as you may recall, both musical conductors and small amounts of marijuana were effectively decriminalized by our city council last week. So, ah – go ahead and enjoy yourself, citizen!