Dining for One at the Rubber Repstaurant

Austin’s Rubber Repertory provided, I mean, anything you desired

I had to sit on this review for a week, until the project was over. Because this thing, this latest happening from Rubber Repertory, if you published a review of it, if you talked about it in public, the whole thing would’ve been – like a disastrously fallen soufflé – pretty much fucked. 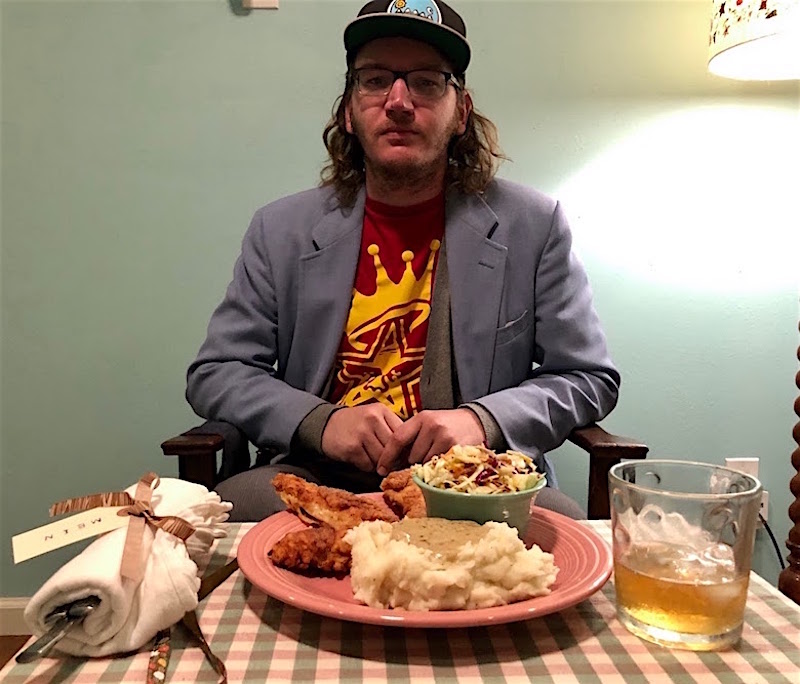 A bunch of people had responded to the company’s call for donations to Austin Wildlife Rescue or the Trevor Project or the National Immigration Law Center. There was a lot of donating going on, of course, because we’re a decently generous community, and c’mon, there’s the possibility that Josh Meyer and Matt Hislope and their culinarily collaborative friends are going to treat you to a meal at their so-called repstaurant.

Because, once you donated, your name was entered into a raffle – and over the course of two weeks, five people would be randomly chosen to dine, one at a time, at that repstaurant.

And now I, among the fortunate few, can finally tell you how the experience went …

It’s four o’clock on a weekend afternoon. You show up at the Cherrywood home of Lisa Laratta, that talented designer of the Paper Chairs theatre company, and Meyer meets you outside. He’s wearing an apron over his regular clothes and his face is bright with that regular, always-glad-to-see-it Josh Meyer smile. He insists that you stash your phone somewhere in your car, then escorts you around the side of the Laratta residence, across the tidy backyard, and over to a small and handsomely made building.

He ushers you inside that building.

The building is a single rectangular room – about, say, 10 feet by 16 feet? It’s neat, unadorned, couple of windows to it, smooth wooden flooring. There’s a single wooden armchair sitting against the room’s back wall; there’s a standing lamp beside that armchair and, beyond that, against the west wall, there’s a small table upon which rests an oldschool tape-player and a stack of cassettes.

There are cassettes containing music by Mannheim Steamroller and Linda Ronstadt and so on; something jazzy by George Shearing is what’s faintly tickling the air as you sit down.

You notice that, sitting on the end of your chair’s right arm, there’s a small plastic object about the size and shape of a hockey puck: It’s a sort of electronic signaling device, on the top of which is printed the single word CALL.

Meyer asks you what you’d like to drink, and you tell him, and he leaves.

A few minutes later, he returns with your drink order – a Topo Chico, which he pours into an ice-filled glass – and he asks you what you’d like to eat.

Me: Uh, well, hmmmm. What are the choices?

Meyer: It’s an open menu – whatever you want.

And you sit there.

There’s a breeze outside, it looks like, the trees’ branches trembling and slightly bending on their thick trunks.

And you sit there. Without a phone.

With nothing to distract you from just sitting there.

How many minutes has it been? How long have you been sitting there, your mind’s wheels spinning and trying to imagine what, exactly, is going on with this repstaurant thing? Twenty minutes? Thirty? The cassette tape ran out a while ago, the room, now Shearingless, is totally silent. Forty minutes, WTF? You have no phone here, no watch, and time is uncharted: Has it really been that long? Is this part of the “performance” or whatever? It’s been at least half an hour. Should you hit that CALL button?

[Resolute note to self at the time: Do NOT hit that CALL button, Brenner. Fuck Rubber Rep, they can’t MAKE you CALL for ANYTHING.]

Eventually – and it’s been 40 minutes by this point, you’d swear – Lisa Laratta taps on the door and enters the room. She stands there, shuffling through a pile of papers. “I was just going through this mail,” she tells you, “and there’s a letter for you.”

Sure enough: It’s a letter, addressed to you at this house, postmarked and everything, from your friend Mo Daviau.

Laratta hands you the letter and departs.

Okay, so now you have something to do: You read Mo’s letter. And it’s a letter telling you about how she misses you and what she feels about you and about Austin. And it warms the cockles of your heart, this letter, and you read it twice, and then you stash it in your jacket’s side pocket.

It seems like, what, 15 more minutes? Twenty? Another half an hour? You look at the CALL button, tempted. And –

Carra Martinez, that Fusebox director and a known co-conspirator of Rubber Rep, taps on the door.

There’s another letter for you: Addressed to you at this house, postmarked and everything, from your son George.

You read George’s letter. You’ve never gotten a letter from your son before, and it’s a letter telling you about how he misses you and what he feels about you and about Austin. And it warms the cockles of your heart, this letter, and it breaks your paternal heart in places where cockles dare not tread, and you sit there, tears running silently down your cheeks for a minute or two, and then you stash the letter in your jacket’s side pocket.

And. The. Minutes. Pass.

Matt Hislope taps at the door and enters. He’s carrying a small tray-table on which rest a legal pad, some envelopes, a couple of pens, and a book of stamps. “Since you’re getting all this mail,” he says, “we thought you might like to respond while you wait.” He sets the table down in front of you and departs.

And, as the minutes continue to pass, you reply to Mo’s letter – having decided to reply in the order in which you received the letters – and you reply to George’s letter, and –

Josh Meyer taps on the door and enters with your meal.

You set your pile of papers carefully on the floor. And Meyer places, on the small tray-table in front of you, precisely what you’d ordered: A cheeseburger with a side of potato chips.

And the burger, supported by a fine thick bun, is cooked medium and perfectly juicy, with three wide strips of Monterey Jack melted on top. And it’s abutted by a crowd of what appear to be freshly-baked potato chips. And that plate is accompanied by a small footed board bearing little cups of mustard and Thousand Island dressing, three strips of bacon, and pickles, and a pile of caramelized onions, and some big slices of tomato and small slices of jalapeño and some slices of avocado, and a couple bright leaves of butter lettuce. 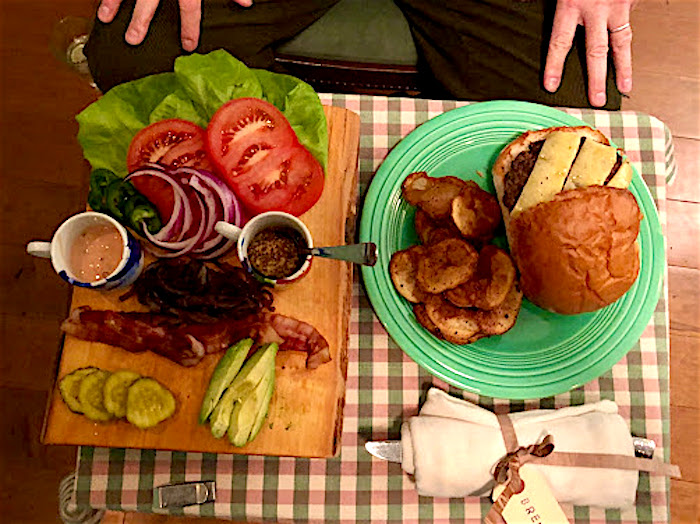 Your reporter's cheeseburger platter at the Rubber Repstaurant.

And you rise, briefly, and set the Linda Ronstadt cassette to playing on the music table. Because let’s do this right.

Then, re-seated, you add some of that fresh foliage and condiments to the lovely, still-steaming burger, and you chow on down.

Eventually, but after not too long, Meyer returns and asks what you want for dessert.

Meyer: We’re actually out of vanilla ice cream – we had that last week – but, if you’d like, you can join us toasting marshmallows around the fire?

Me: That’d be great!

Because by now night has fallen, and it’s dark outside, and there are several lawn chairs arranged around a big fire dish in the backyard. And you sit there among the deepening shadows, around the blazing logs, with Josh Meyer and Matt Hislope and Lisa Laratta and Carra Martinez, and you’re all toasting marshmallows and talking about Austin and the arts scene and your oddly entangled lives … and you hardly notice time passing at all.

And that was the Rubber Repstaurant.

And then the Rubber Rep crew lurking in Laratta’s kitchen drove out to the grocery stores and bought the ingredients.

Sometimes the nearest H-E-B sufficed. Sometimes a trip to search among the fancier shelves of Central Market across town was required. Once, they had to go to Fiesta for artichokes.

And then, having returned through Austin traffic with the basic culinary materials and scraping the internet for recipes necessary to fulfill the order, they created the meal from scratch, each of the crew adding whatever level of skill they had in preparing, say, vegetables, meat, fish, soups, baked goods, and so on.

(“Carra sent Matt back to the store to get a different kind of lettuce,” Meyer told me later. Martinez: “I was like, ‘We can’t give Brenner just iceberg lettuce!’”)

And while some traveled and shopped and then cooked and plated, others would intermittently bring you letters from your loved ones – letters that they’d gotten your darlings, all clandestine and sneaky and shit, to write to you and mail to Laratta’s address.

(Or letters, if things got too close to the deadline, that Matt Hislope went and secretly picked up from those worthies the day before – while you’d gone about your normal routine all willy-nilly and unsuspecting of such crazed Trystero machinations playing out in the background.)

And that was it: the Rubber Repstaurant – a typical Rubber Repertory performance in that it was 1) unlike anything else you’ve ever experienced, 2) deeply interactive and enjoyable, 3) equal parts brilliant and silly and weird and poignant, and 4) requiring a daunting amount of organization and labor behind-the-scenes.

That’s four things, yes. And, besides me, there were four other diners. And these are their names and the meals that they ordered and received: