Hot spec script gets a reading at ColdTowne to benefit RAICES

Grown Ups 3 doesn’t totally exist: No movie of it will ever be made, and no six-part Netflix series. But this spec script created by comedian Tom Scharpling doesn’t need to exist to make an impact. 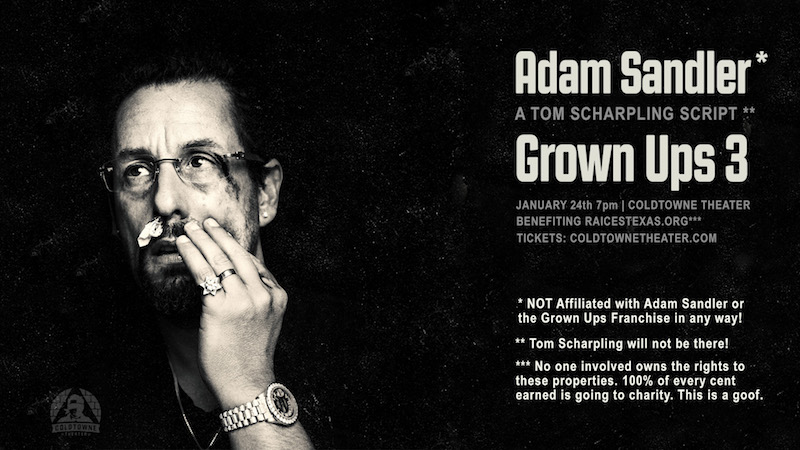 For those who haven’t dug into the breezy 52-page PDF that Scharpling dropped online in early January, it hits a lot of the same beats as the first two films in Adam Sandler’s Grown Ups franchise: the dull roar of getting older; the dead-eyed nature of capitalist creativity, driven not by passion but by dollars; and the ever-present question of whether the cast of Grown Ups can outrun a machete wielding killer. Well, maybe that last one is special to Scharpling’s work. His story follows Sandler, David Spade, Kevin James, Chris Rock, and various other common Sandman associates as they go on a road trip to get to know each other again, only to find their vacation spot plagued by a killer who welcomes them to this comedy-turned-horror with a chilling, if accurate message: “Your art is your life and your life is your art!”

The response to Scharpling's script was so strong that multiple comedy venues across the country contacted him, asking to perform the zhuzhed-up Sandler fanfiction on their stages. The creator has blessed these productions with the single stipulation that any profit from the readings go to charity. Now in Austin with that same Sandler & Co. love is ColdTowne’s wonderful cavalcade of comedians bringing Grown Ups 3 to life on Friday, Jan. 24, with all proceeds benefiting RAICES.

“I love scripts that are thought experiments like this,” co-producer Kyle Romero explains, pointing to Billy Domineau’s 2016 Seinfeld spec script exploring how Jerry and his friends might react to 9/11 as another example. The thrill, Romero maintains, comes from taking these characters out of their common ground, such as the ease Sandler and his friends have in broad comedies, and putting them into new scenarios.

ColdTowne’s presentation will feature a host of Austin comedic talent taking on the roles of the threatened superstars, including Romero himself playing James, while Nicole Russell is tackling Spade’s unique phraseology. “It’s shockingly accurate how [Scharpling] captured the David Spade voice,” Romero muses. “All of these little jokes that are kind of nonsense.”

Having their donations go to RAICES was, according to Romero, “an obvious choice given the climate that we’re in right now. We all feel very strongly about the travesty this administration is inflicting on people of color, people at the border.”

As for why the script resonates so widely with creatives, as well as with fans of Sandler’s work, Romero says, “What I think Scharpling is driving at is it doesn’t matter if you want to make things like Grown Ups. Like who wouldn’t want to make a movie and get paid millions of dollars to go on vacation with your buddies and also have that movie turn out to be a huge hit? Everyone would want to do that. The problem comes in when you’re doing it with the wrong intentions or you’re phoning it in. Just commit to it and have fun. Embrace that part of you. In my mind, there’s no actual killer. If you were to pull that mask off, it’d be a black void or tentacles.”

ColdTowne will present the reading of Grown Ups 3 on Friday, Jan. 24, 7pm, and tickets have sold out. But don’t despair! It's also hosting a livestream of the event where you can also make online donations for RAICES. For more information, visit the ColdTowne website.