Sometimes you just want to indulge yourself in the fanciest night out you can imagine. 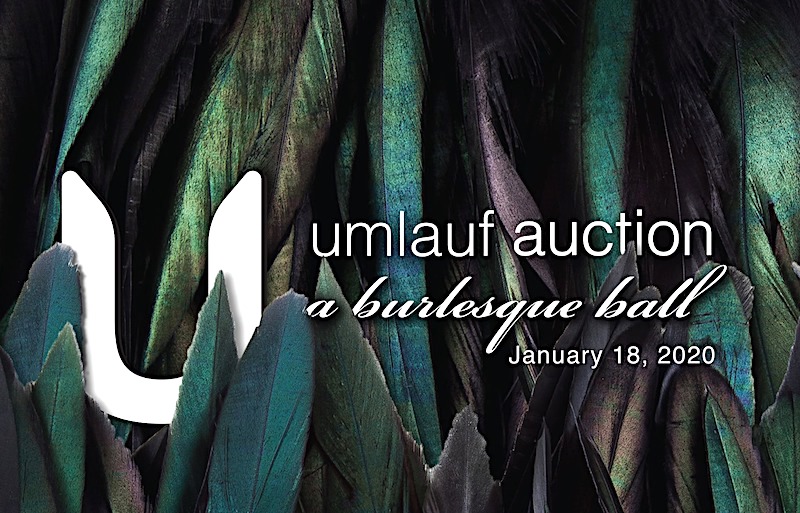 But how much better, even, when that well-deserved escapade includes 1) a bit of the ol’ burlesque, and 2) that burlesquery takes place in mid-air while you watch from below, amazed and sipping a fine cocktail among a crowd of poshly appointed friends and neighbors?

That’s so much better, we’d insist.

Also: Charity, right? Doing good for your community? That’s always a plus.

We’re pretty sure that the Umlauf’s Burlesque Ball this Saturday night will cover all those bases, as the venerable sculpture garden and museum (who recently brought us that stunning Michael Ray Charles exhibition) has teamed up with the daring dazzlers of Sky Candy to supercharge a slate of live and silent auctions – auctions of luxury items and experiences that’ll smooth anyone’s way into a brighter 2020.

How about a two-night getaway to Mexico City, with accommodations at that urban gem’s own Four Seasons Hotel? How about a rockstar-esque trip to attend this year’s Grammy awards? What about a keeping-it-local package of spa experiences and self-care finery that’ll make you remember what the words “relax” and “invigorate” actually mean?

(Personally, we’ll be vying for the double array of rare bourbons that’ll be up for bidding; but then, ah, we’re somewhat known as ardent tipplers.)

Still, as the lawyers say, cui bono? Who stands to gain from this spectacle-enhanced flexing of our wallets’ muscles?

Well, the Umlauf’s nonprofit programs will gain, that’s who. The tactile wonders of Guided Touch Tours offered to the blind and visually impaired, for instance. The museum’s ongoing, arts-enriched outreach to Title One schools and community centers, for another. Initiatives that improve the quality of life for our fellow Austinites, in other words, and all of it fueled with your help – as you mingle with the sharply dressed crowd, and watch the risky and risque aerialists, and imbibe a few wonders of the mixological craft, and snack on the sort of goodies that caterers make their names by providing to soirées such as this one. That takes place, please note, at the Sky Candy venue.

Now, it’s quite an outlay for entertainment – good heavens, yes. It’s at least $500 for a ticket to partake of all this late-stage luxuriating and high-flying spectacle. But, as noted, it’s for a good cause, and … well, sometimes you just want to indulge yourself in the fanciest night out you can imagine, right?

In which case, citizen, this event is your huckleberry.